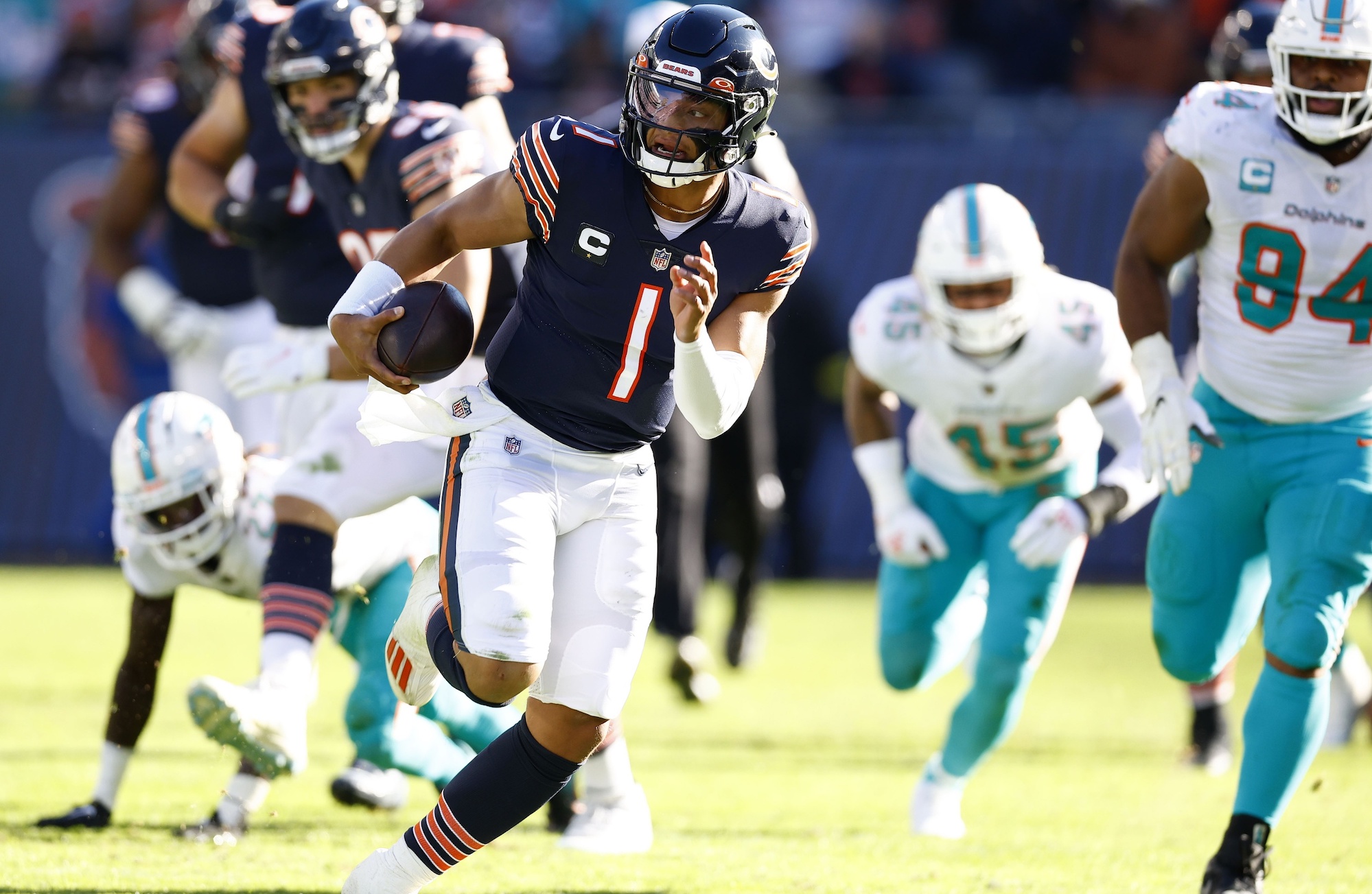 After his big game on Sunday, Chicago Bears quarterback Justin Fields may have established himself as the best quarterback in the 2021 NFL Draft class. If nothing else, the last few weeks of NFL action must have some of the teams that passed on him questioning that decision.

It hasn’t always been an easy time for Fields in his first two seasons as a pro, but he has really come into his own as both a runner and a passer over the last couple of weeks. Bears offensive coordinator Luke Getsy has figured out how to take full advantage of his young quarterback’s mobile skill set, Fields is starting to show signs of positive development and the result has been one of the most consistently good stretches of Fields’ career.

The culmination of it all came on Sunday against the Miami Dolphins, as Fields ran and passed his way to what was perhaps his best professional start. The second-year quarterback finished the day with 123 passing yards and three touchdowns in the air along with 178 rushing yards and a rushing touchdown on the ground. In doing so, Fields broke the previous NFL record for most rushing yards by a quarterback in a regular season game, one previously held by Michael Vick.

Fields deserves a ton of credit for the progress he’s made as an NFL quarterback this season. His decision-making has improved considerably over the course of this season alone and his playmaking ability has reached new heights accordingly. With a poor—albeit improving—offensive line in front of him, knowing when to stay with a play and attempt a throw downfield and when to take off with his legs was always going to be the key to Fields’ success as a mobile quarterback. Against the Dolphins, he consistently made the right decision and had everything clicking as both a rusher and a passer.

Fields’ first touchdown of the day was largely thanks to a great play call by Getsy and a phenomenal play fake by Fields. As a team that has run the ball 60% of the time this season, the Bears have set up play-action nicely, allowing Fields to thrive off of it.

Beautiful play fake. @justnfields hits @ColeKmet to give the #DaBears the lead!

The great fake handoff on that play, in particular, took it to the next level, fooling everyone in the Dolphins’ front seven to come crashing down. When Fields booted out, his tight end was wide open, and a nice block downfield allowed him to walk into the end zone nearly untouched.

Where a good play call and excellent play fake are what helped make Fields’ first touchdown of the day a success, Fields deserved all of the credit for his second passing touchdown on Sunday.

On a 3rd-and-eight with his team trailing by 11 points at the end of the first half, Fields needed to make a big play to get his team on the board, especially with Miami starting the second half with the ball.

What a throw, what a catch 😮‍💨

As has often been the case this year, the play didn’t go perfectly for Chicago. The Dolphins’ defensive front bullied the Bears’ O-line, pushing them all the way into Fields’ face just before he was able to get the pass off. Coverage downfield was solid too with All-Pro cornerback Xavien Howard seemingly just in range of receiver Darnell Mooney unless Fields made a perfect throw. Well, Fields made that perfect throw against good coverage and pressure right in his face, stepping up and delivering a throw with beautiful placement, putting the ball right where only Mooney could grab it with a well-timed leap.

Fields’ sole rushing touchdown of the day hit the opposite end of the passing/rushing spectrum of everything that makes Fields so special.

As pressure collapsed around him on yet another third down play, the young quarterback started to scramble forward. All the while, he kept his eyes downfield—a crucial point of development for all mobile quarterbacks who might otherwise tuck and run if a play doesn’t immediately work out. After his pump fake froze the defender in front of him, Fields made the eventual right move to tuck the ball and take off. The pump fake gave him just enough space to thread the needle between a few Dolphins defenders before winning a foot race to the end zone with his elite breakaway speed.

The Bears may have lost in the end, but the progress Fields has made since he entered the league was tangible against the Dolphins. All of it—the decision-making, the arm talent, the pocket awareness, and mobility to scramble when the time is right—was excellent and well-executed by the second-year quarterback on Sunday.

Fields is a truly special talent when things are clicking on any given Sunday—his game against the Dolphins was the perfect example of that—and with the time to develop and better play-calling he’s gotten this season, things are starting to click more frequently this season. That’s a really good sign for Fields and the Bears moving forward; once he gets more protection up front and more weapons around him, watch out.