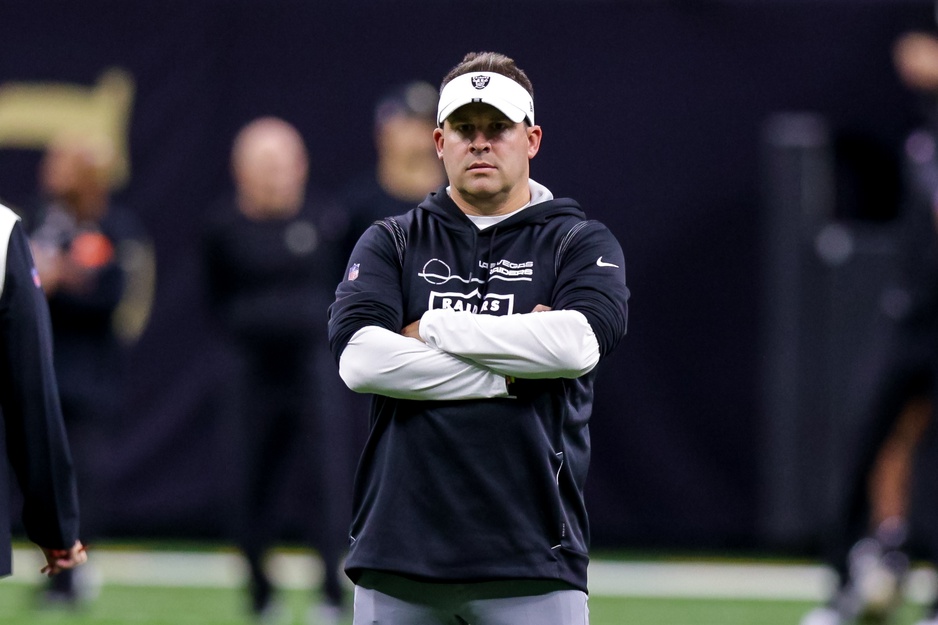 Is Josh McDaniels Coaching For His Job On Sunday?

It’s safe to assume the 2-6 Las Vegas Raiders aren’t enjoying the fruitful campaign they envisioned they’d be. The lowly Raiders have lost two consecutive contests and sit comfortably in fourth (last) place in the AFC West. Head coach Josh McDaniels hasn’t catapulted the Raiders to legitimate postseason contention. Could McDaniels be coaching for his job against the Indianapolis Colts on Sunday?

Initial reports have recently indicated that McDaniels is safe and isn’t facing the same amount of pressure within the organization as he’s faced in the media and fan base. After all, McDaniels was hired by first-year general manager Dave Ziegler, who worked alongside McDaniels for 10-plus seasons in New England. It’s difficult to imagine Ziegler losing faith in McDaniels this quickly given their shared history.

McDaniels installed what’s largely viewed as a complex offensive system for players to master and execute. Growing pains were expected, but perhaps not to the lengths that have the Raiders off to their worst start since they began the 2018 campaign at 1-7. Second-half adjustments have been a concerning issue, with McDaniels’ Raiders already blowing three 17-point leads, tying the NFL single-season record, sharing the undesired feat with the 2020 Los Angeles Chargers and 2003 Atlanta Falcons. Las Vegas’ latest two losses have come at the hands of the New Orleans Saints and Jacksonville Jaguars —two dwindling teams that are a combined 6-11.

Despite rumors of his safety, mounting pressure often alters situations. A defeat on Sunday to the Indianapolis Colts would be arguably catastrophic. The Colts are under the guidance of interim head coach Jeff Saturday after relieving Frank Reich. Saturday is largely viewed as ill-prepared to spearhead the Colts forward after failing to previously coach at the professional or collegiate levels. McDaniels’ Raiders would drop to 2-7, already matching last season’s loss total (10-7) through just nine regular-season contests.

And the Raiders presumably got better in the offseason. Adding Davante Adams via blockbuster trade and signing Chandler Jones rounded out a rather top-heavy roster. Adams has been held to 36 receiving yards or less on three appearances. Jones is one of the league’s worst pass rushers from an efficiency and production standpoint this season despite the presence of Maxx Crosby opposite him.

Things went from bad to worse for the Raiders on Thursday. Both tight end Darren Waller and wide receiver Hunter Renfrow were placed on IR. Waller and Renfrow will miss a minimum of four contests. Their absences leave the Raiders with an ultra-thin pass-catching corps featuring Adams, Mack Hollins, and little else.

McDaniels is rumored to be safe. Owner Mark Davis and Ziegler continue to preach patience and continuity. The Raiders’ decision-makers may sing a different tune if Josh McDaniels is defeated during Saturday’s coaching debut with the Colts.