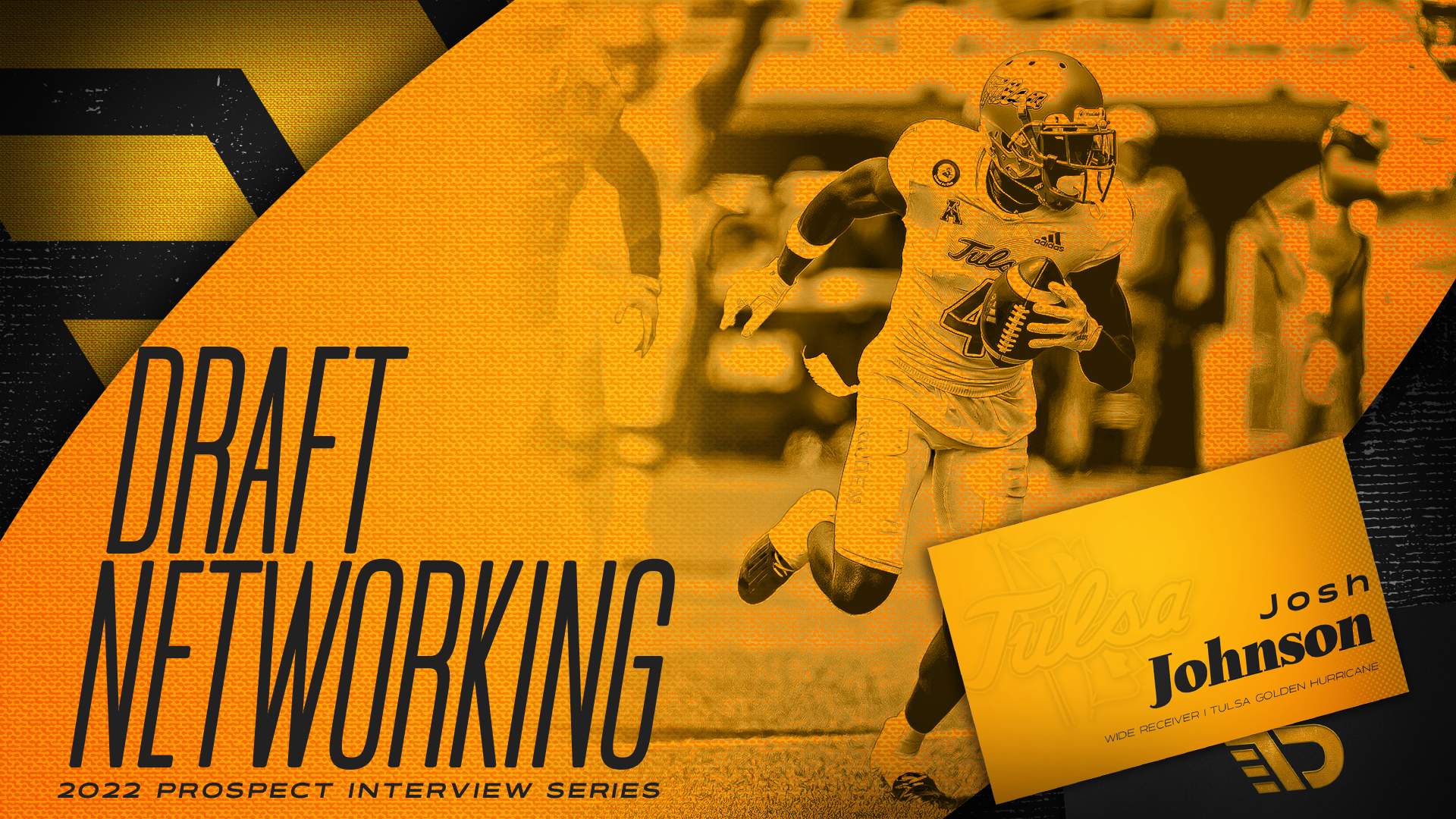 Don’t sleep on Tulsa’s Josh Johnson. The former transfer from Iowa State got consistently better throughout a solid three-year tenure at Tulsa. In 2021, Johnson enjoyed a career-best breakout campaign by totaling 83 receptions for 1,114 yards and six touchdowns.

Johnson projects as a chain-moving slot receiver at the next level in a league that is placing more emphasis on high-level slot receivers with each passing season.

Johnson recently spoke exclusively with The Draft Network regarding his final campaign as a Golden Hurricane, his favorite route to run, why he feels like he’s not getting enough credit throughout the pre-draft process, and so much more.

JM: You exploded in 2021 by recording career-highs in receptions (83) and receiving yards (1,114) while matching your career-high in touchdowns (six). What allowed you to take that step forward this past season?

JJ: I feel like all of the extra work I put in throughout the offseason really paid off. It helped me a lot this past year. I’ve been grinding like that for the past three years and I took full advantage of my opportunity.

JM: You definitely did. You had so many big performances this past season, but an 8-140-1 game in a big win over Memphis stuck out to me. You had a lot of similar stat lines, but the one against Memphis was huge. What was it like being in the zone for that game?

JJ: I had a great week of practice leading up to that game. I was definitely ready for that challenge. It was a homecoming game so I knew there was going to be a big crowd in attendance. I put in a lot of extra work during the week leading up to that one. By the time game day arrived, I was really confident and fully ready to go. I was able to get my first few catches and touches toward the end of the second quarter going into halftime. I came out of that tunnel with some momentum for the second half.

As a receiver, I felt like a shooting guard that had that special night where he feels like he can’t miss. I didn’t think anybody could guard me or cover me that night. Everybody that came over to my side of the field, I was locked and ready to go. I made some things happen after the catch as well. Being in the zone that whole night, it was an amazing feeling. I felt like all of the extra work I put in throughout the week really helped.

JM: It was a special performance. You had this amazing moment at the NFL Scouting Combine where you announced you’d be the only receiver participating in the bench press, and you put up a solid 14 reps at 225 pounds. What made you want to get on the bench like that?

JJ: I like to look at myself as the ultimate competitor. I welcome all opportunities to compete against the best players in the nation. I found out that every single receiver in attendance skipped on the opportunity to participate in the bench press, and I saw that as an opportunity I could take full advantage of. I knew I had consistently put up 12 reps during my pre-combine training process. I felt like 12 would be a good number for my size. Once I got under that bar, I reached 12 and I knew I had a few more reps in me (laughs). I pushed out a few more reps and 14 was a great result for me.

JM: You had that momentum going. When we turn the tape on, we see a chain-moving slot receiver that adapts on the fly against zone coverage. How did you develop that ability to read zone coverage on the fly?

JJ: I used to play as an outside receiver. I didn’t really understand coverages coming out of high school. I was raw in that area. I actually attended Iowa State before I transferred to Tulsa. We had this amazing receivers coach at Iowa State when I first arrived. I sat down with him and he taught me a lot about coverages. I was able to learn that the safeties often tell you everything you need to know.

Once I was able to learn those coverages, I became capable of reacting in the middle of the play and doing those things you’re talking about. The game began slowing down for me.

JM: Speaking of the slot, that’s where you’ve done the majority of your damage. The NFL has really changed how they view the slot receiver. Some of the best pass-catchers are operating out of there nowadays, such as Los Angeles’ Cooper Kupp. What do you make of the revolution the slot position has experienced?

JJ: I love playing in the slot. I fell in love with the slot position over these past two seasons at Tulsa. As a slot guy, you better be able to do it all. You gotta be able to come down and block. As a slot, you also have to be able to run the entire route tree.

Us slot guys, we’re often the shiftiest players on the field. We get in and out of breaks efficiently. I feel like coaches can move us around, put us on the outside and let us run a 20-yard comeback route. We can run it correctly however the coach wants us to run it because we’re students of the game. You gotta’ have some special talents to play in the slot.

It honestly takes a different mindset to thrive in the slot. We’re a lot different than NFL receivers who just play on the outside. If you’re able to play outside and in the slot, it shows your coaches the versatility necessary to move around all over the formation. It’s all about being used in the offense in multiple ways.

JM: Speaking of running a full route tree, do you have a favorite route to run?

JJ: I really don’t. I really just love running routes, period. Whatever route my coach calls, I run it to perfection. Whatever the coaches want, whatever my quarterback wants from me, I’m happy to run it the way it’s supposed to be run. I put in the extra work and time. I just love running routes. It can be a five-yard route, a 15-yard route, a deep post, it doesn’t matter. I love it all.

JM: Tell me a little about your release package and the variety you possess in that area.

I have a lot of different releases. If I see a guy on his heels, I can get physical with him because I know he thinks I’m gonna try to release. I can fake like I’m going to release, come off that and get into his chest a little bit. I love working on my releases throughout the offseason. I’ll run different dummies and things of that nature. I get creative with everything I do. That’s where my release game comes from. It’s all about being creative.

JM: I’ve appreciated your time today. Why should a team use one of their draft picks on Josh Johnson?

JJ: I’m going to be the hardest working guy in the room. I’m not going to let anyone outwork me. I’m going to bring others up with me as well. I love seeing my teammates succeed. I’m a team-first player. I want to see everybody win. I’m a people person. I’m very humble, but at the same time, I’m very confident as well.