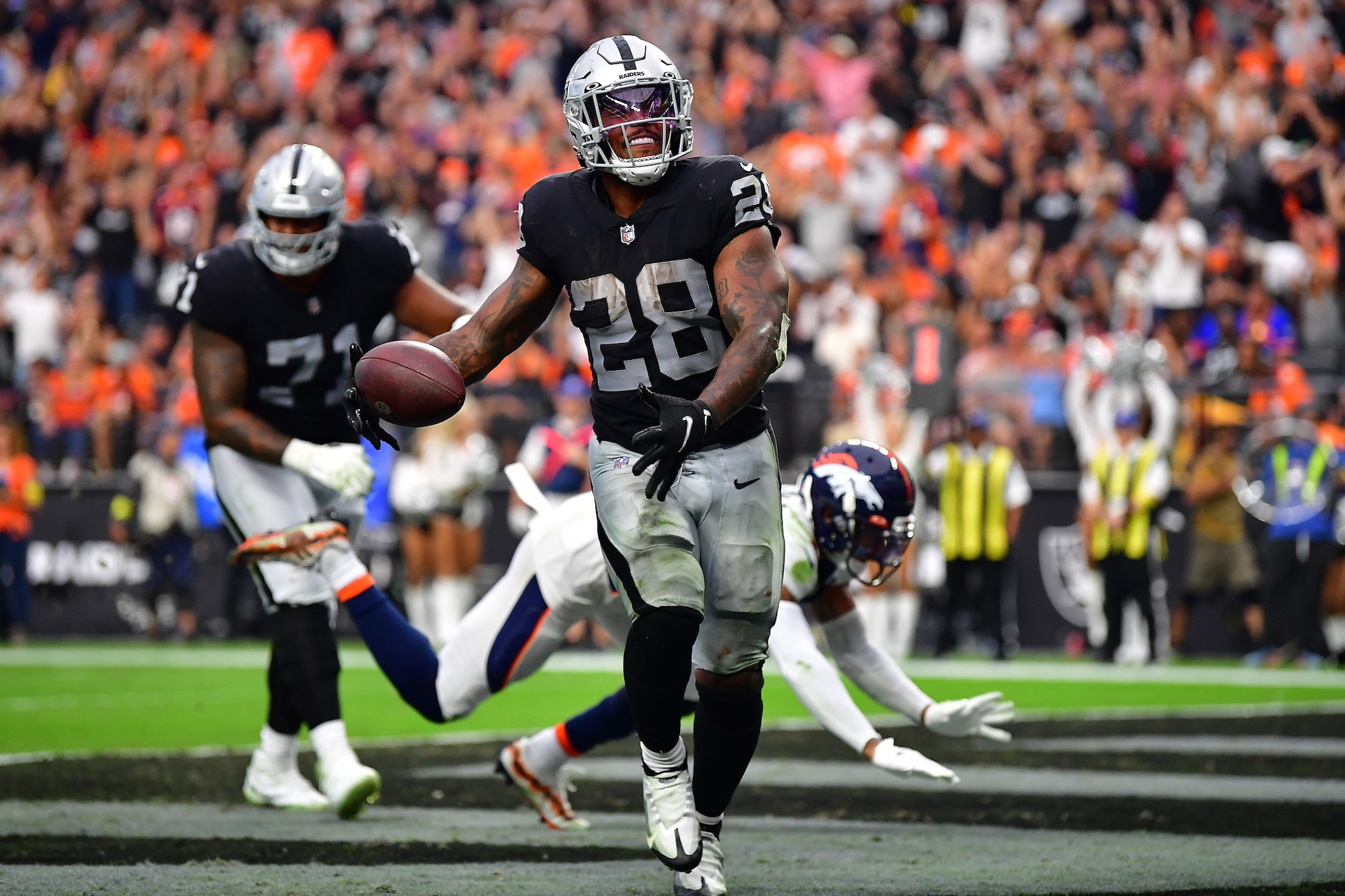 Should Raiders Give Contract Extension To Josh Jacobs?

Las Vegas Raiders starting running back Josh Jacobs has begun the season in jaw-dropping form. Jacobs currently ranks third in the league in rushing yards (490). Jacobs is averaging a career-high 5.4 yards per carry and has scored three touchdowns. Jacobs is currently gaining advantages in contract negotiations, but the Raiders may be hesitant to offer Jacobs a long-term extension.

Jacobs entered the campaign in a contract year after Raiders general manager Dave Ziegler declined his fifth-year player option in the offseason. Jacobs is earning a base salary of $2.1 million this season, via Spotrac. Ziegler inherited Jacobs from the previous regime, which means he has no ties to the former Alabama ball-carrier. Jacobs is being severely underpaid and will command a sizable raise in pay ahead of the 2023 season. We’re not convinced it will arrive in Vegas.

It’s worth taking Ziegler’s history into account. He arrived in Vegas via New England and brought head coach Josh McDaniels with him. Ziegler and McDaniels often treated the running back position as a replaceable one in New England while preferring to utilize two-to-three-man backfields. The Patriots rarely paid running backs while McDaniels proved capable of scheming production out of underrated (and underpaid) options.

From 2016 to 2021, four different ball carriers led the Patriots in rushing. That list of characters includes Dion Lewis, LeGarrette Blount, and Sony Michel. None of these players received a second contract from the Patriots (Damien Harris may soon be joining this list), and none of them enjoyed particular success outside of Foxboro. Rhamondre Stevenson currently leads the Patriots in rushing, which may give them another new leading runner in 2022. Running backs come and go in New England, and the tandem of Ziegler/McDaniels believe in the Patriot way.

One can also argue the Raiders have already begun preparing for Jacobs’ eventual departure. Ziegler drafted former Georgia running back Zamir White with the No. 122 overall selection in the 2022 NFL Draft. White has hardly been involved this season, gaining just 19 yards via four carries, but his selection was always one with future intentions as opposed to immediate impact. White remains under contract through 2025 at a low controlled cost. Brandon Bolden, a McDaniels favorite, is also in the mix.

What will Jacobs’ next contract even look like? When extrapolating Jacobs’ current production throughout the course of a 17-game season, he’s currently on pace to record a career-high 1,666 rushing yards. While keeping up his current pace may prove to be difficult, it’s safe to assume Jacobs will surpass his previous career high of 1,150 yards, a feat he accomplished as a rookie in 2018.

Should Jacobs reach those heights, he’ll likely look to match or surpass the three-year, $21 million identical extensions signed by Leonard Fournette and James Conner last offseason. Like Fournette, Jacobs will enter negotiations with multiple 1,000-yard campaigns under his belt. It will provide Jacobs with some negotiating power, either in Vegas or on the open market.

Although Jacobs’ current form is rather encouraging, the consistency simply hasn’t been there. The Raiders will cautiously wonder why Jacobs is performing at his best during a contract season. Jacobs certainly isn’t the first player to locate new-found motivation when an uncertain future comes into play.

Jacobs disappointed throughout the 2020 and 2021 campaigns. Jacobs rushed for a career-low 872 yards in 15 appearances last season while being hampered by ankle and toe injuries. Jacobs averaged a pedestrian 4.0 yards per carry and lacked explosiveness. It was the continuation of a similarly disappointing 2020 season that saw Jacobs average 3.9 yards per carry and total just 1,065 rushing yards despite approaching 300 carries (273). The Raiders will take history into account.

Jacobs is currently producing like a legitimate difference-making offensive weapon with 2020 and 2021 firmly forgotten. His upside remains fairly high despite his uncertain future. Jacobs may continue making impact plays in 2023 and beyond. Whether they occur in Vegas or elsewhere remains to be seen.