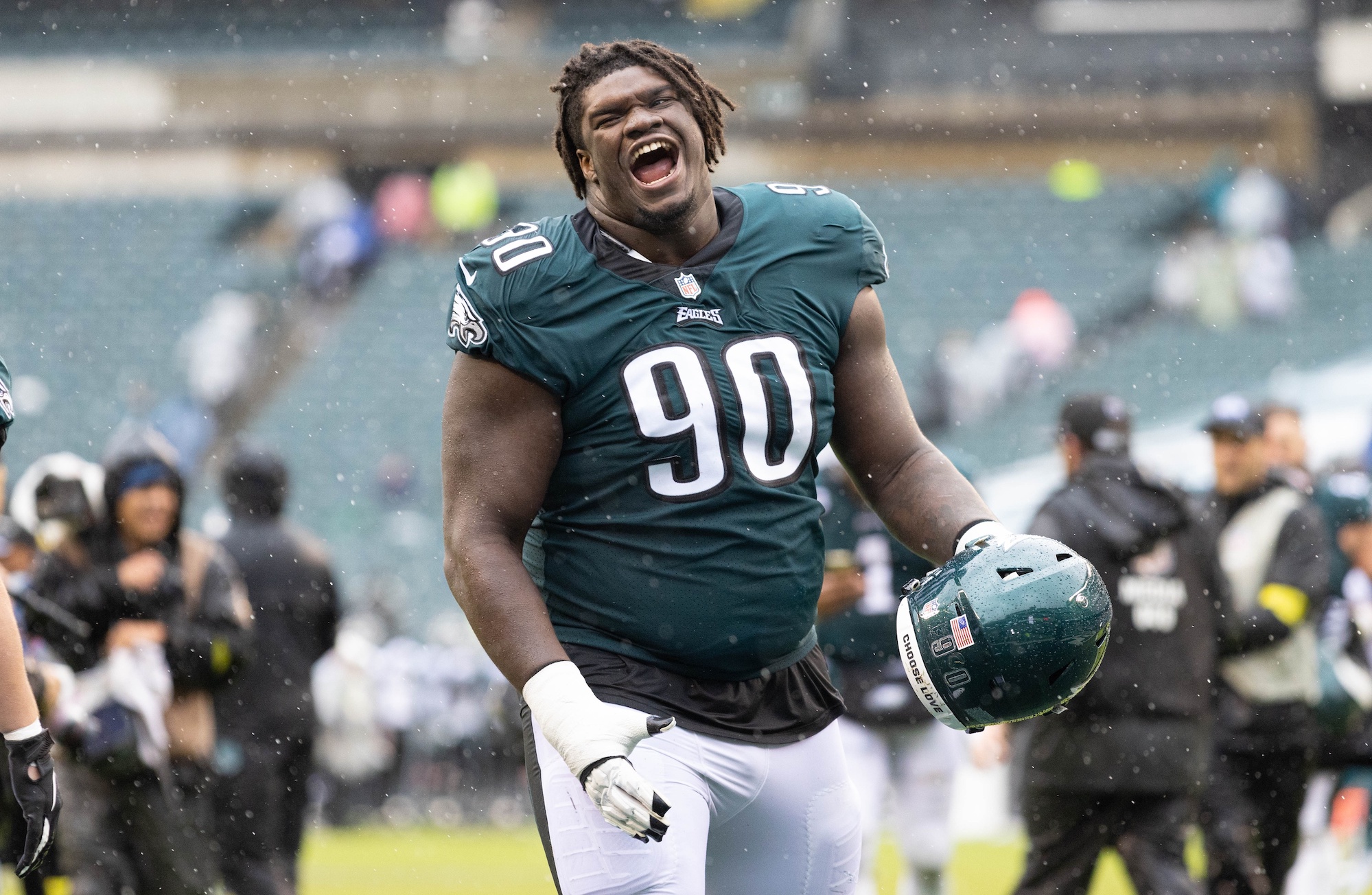 The 12-1 Philadelphia Eagles own the league’s best record. Veteran and rookie contributions have catapulted the Eagles to their current success. Rookie defensive tackle Jordan Davis has been outstanding while meeting pre-draft expectations.

Davis joined The Draft Network for an exclusive discussion earlier this week while promoting his partnership with Campbell’s Chunky and the Chunky Sacks Hunger relief program. Davis discussed Philadelphia’s current form, his favorite candy, what he enjoys about stuffing the run and so much more. Davis also discussed the upcoming College Football Playoff.

JM: You’ve teamed up with Campbell’s Chunky to host a food donation event at Philabundance as part of the Chunky Sacks Hunger relief program. The program is designed to fight food inequality. Why is this cause so important to you and your family?

Jordan Davis: It’s a cause I can identify with. I think back to the way I grew up. I’ve been in similar situations. Food security wasn’t always present for me and my family. It’s a special feeling to be a part of this program and give back to my community. I’m fighting for a cause that I believe in. It means that much more to me because I know exactly what it feels like to go hungry. I’m glad I have this opportunity to use my platform for something positive.

JM: It truly is a special program that’s helping so many families in need. You recently returned to the lineup after a high-ankle sprain sidelined you for several contests. How did that time off benefit you?

Jordan Davis: It gave me a lot of time to learn behind the scenes. We brought in a lot of guys that could help the team while I was off like Ndamukong Suh and Linval Joseph. I’m blessed to be playing with those guys now and learning from their experiences. I’ve already learned so much from them. We already had such a special group that included Fletcher Cox, Javon Hargrave, and BG [Brandon Graham].

It’s one of those things where I’ve spent my time soaking up all of this energy and knowledge. They’re providing me with so much useful information. I’m paying close attention because they’ve been playing the game at such a high level for so many years.

To be able to play with these guys throughout my rookie season while we’re having such a successful season, it’s one of those things you’re blessed to be a part of.

JM: You stole my next question right out of my mouth. Let’s expand on what Ndamukong Suh and Linval Joseph have taught you thus far.

Jordan Davis: Both Suh and Joseph are big on the aggression of the game. They’re both aggressive and progressive. They’re always teaching me little techniques. Joseph specifically has spent the majority of his career playing the nose guard position. He has the ability to teach me how to refine my game at that position.

Suh is playing that outside shade position. He’s helping me learn that position because that’s not one I was overly familiar with. I’ve strictly been a nose guard for the majority of my career. I’m gaining knowledge from all areas right now. They’ve both been very valuable to me. It’s imperative that I learn from them because at the end of the day, next year’s roster may be different. I may be asked to do different things. I want to enjoy the time I have with my current teammates.

JM: I love that. You talked about Joseph playing the nose guard position, where you’ve spent the majority of your time. What does Jordan Davis enjoy most about stopping the run?

Jordan Davis: I take a lot of pride in resetting the line of scrimmage. It’s all about holding up that line. When two offensive linemen are trying to move you off your spot, I know it’s my position to not budge. I don’t let them move me. That gives me a terrific feeling. It takes two people to try to move me and I still don’t let them move a single inch of me (laughs). That’s something that comes with a lot of pride. Linval Joseph and I take that very seriously.

JM: We’ve seen that so far. Did you have a “Welcome to the NFL” moment this season?

Jordan Davis: I immediately think back to playing against the Dallas Cowboys for the first time (laughs). Those double teams were definitely a welcome-to-the-NFL moment. Going up against Zack Martin was something special. He’s been such a tremendous player in this league. He’s one of those guys I’ve been watching since I started playing football. Getting a first-hand look at how dominant he is at his position was a special experience. He commands so much respect in this game.

It’s nothing crazy, but going up against offensive linemen that have been All-Pro players and have that big-time experience was an eye-opener for me. He’s been playing for years. I respect this game so much and I gave him my respect when I played against him.

It was a tremendous opportunity for me. I’m not a trash talker. Brandon Graham is (laughs). BG loves to trash talk. I play the game with respect and the Cowboys gave me my respect back. Even some of their offensive linemen gave me pointers on what I can do better. When you have guys like that around the league that want you to succeed, you realize how much of a brotherhood this league really is. Those guys saw the light inside of me and they want me to be the best I can be. Football is a brotherhood. I’m blessed to be a part of it.

JM: Wow, that’s an incredible story. We love that, especially coming from a rival like the Cowboys. Your obsession with candy has been well-documented. Before we switch back to football, what’s been your go-to choice this season?

Jordan Davis: Reese’s Cups, man (laughs). All of the guys in the locker room love Reese’s. It’s become my go-to choice out of necessity. I only eat candy when I’m at the facility and there are always Reese’s Cups on hand. I have to be ready to stop the run, man (laughs). Reese’s is a favorite among our defensive linemen. That’s what I’ve been drawn to the most this season.

JM: We love that. You’re not the only rookie that’s contributed to Philadelphia’s success this season. Cam Jurgens, Reed Blankenship, and Grant Calcaterra have all contributed in spots. What makes this class special?

Jordan Davis: It’s all about the way we’re playing. Obviously, we made it to this point because we’re great at what we do. We’ve gelled together. We came together as a unit. We were all blessed to be drafted by a team where everybody gets along and has love for one another. We have an amazing locker room. It’s been a great experience. There isn’t any animosity. Everybody is learning and growing together. We love being coached.

At the end of the day, you never know what’s going to happen. We love being coached up because we want to be ready to do our jobs. You never know when somebody is going to get thrown into the fire. We don’t want to be detrimental to the team. Look at Reed Blankenship and how he’s played at safety for us as of late. He came in as an undrafted free agent and he’s been lights out for us. Guys like Blankenship, it’s a testament to our class and how we’re getting after it. We’ve been the best we can be. At the end of the day, we’re the future.

JM: It looks like a special class. When you reminisce on last season’s Georgia Bulldogs team that won the National Championship, what sticks out in your mind?

Jordan Davis: I always think about the connection we had. We had a special connection as a team. I honestly get the same vibes here with the Eagles. Obviously, we were a bunch of college students so we had more time to hang out. The connection we had at Georgia was special. You can feel it. We felt it throughout our season.

You can still feel it when you go back and watch those games. We played as a unit. If there was a problem, like the SEC Championship Game we lost to Alabama, we fixed the issues and resolved them. It was a testament to our coaching staff and the group we had. The older guys on that National Championship team, we came in together in 2018 and we knew we had a goal in mind to win a championship. We wanted to win it all.

To be able to do that with the guys I came in with, it was the icing on the cake for us. It was a perfect way to leave the program. Most of those guys are playing in the league now. We see each other from time to time and we still have that connection. Even the guys you played with as a freshman or as a sophomore, they’re in the league now and they left when I was still a young player, we still have that Georgia connection. Georgia ties run deep.

JM: That’s so special. Why will Georgia win the Natty again this year?

Jordan Davis: Because I don’t see anybody else stopping them (laughs). That’s why. I’m very confident in my boys. We know it. We just have to go out and do it/ We have to play our game.

JM: Absolutely. We’ve appreciated your time today, Jordan, and all the work you’re doing to fight hunger in Philadelphia with Chunky Sacks Hunger. In closing, what are your goals to close out the 2022 campaign?

Jordan Davis: We’re planning to end this season with a bang. I don’t like to put my goals out there. I rather surprise myself (laughs). I definitely think I’m surprising myself every single day. The sky’s the limit.