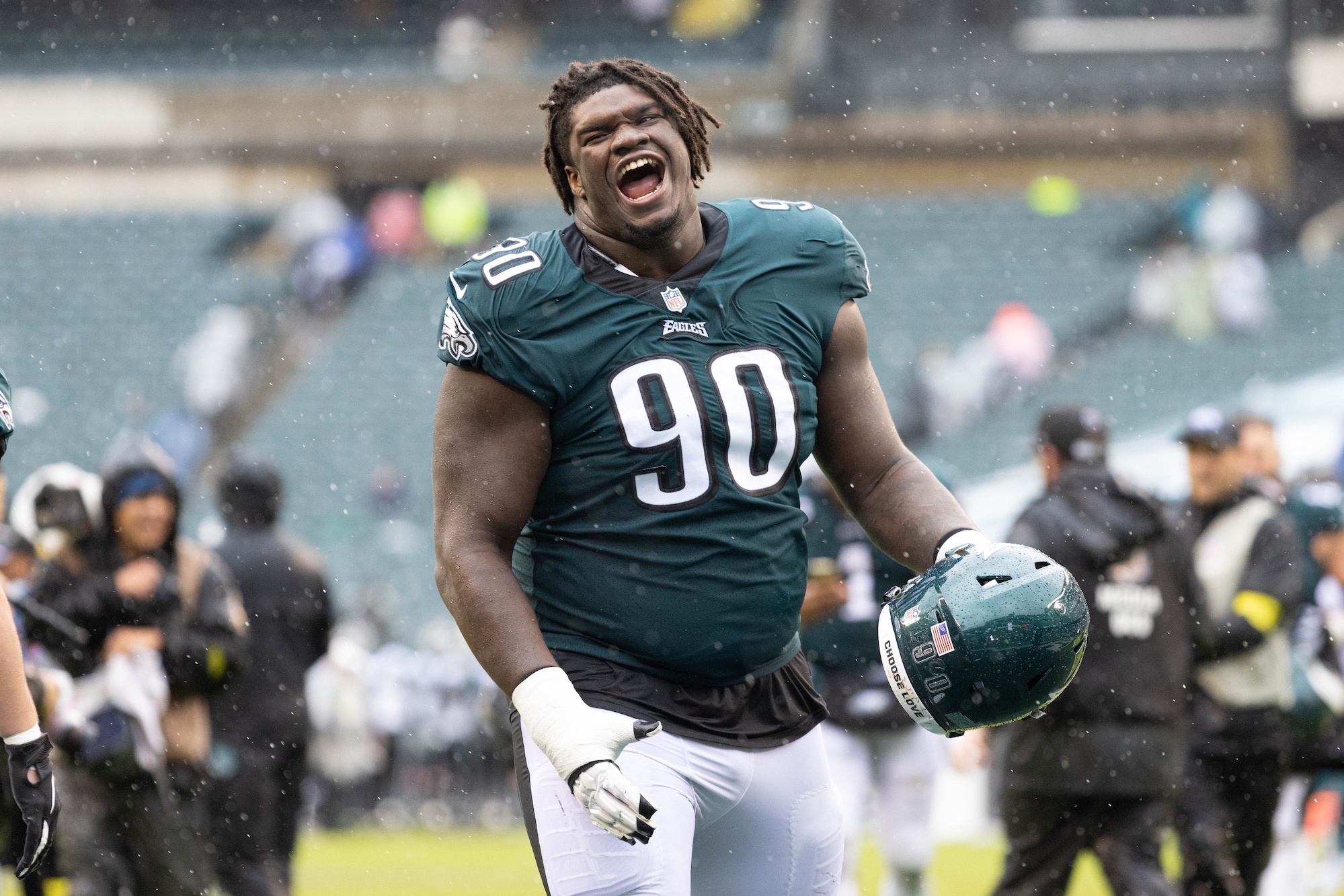 If it wasn’t evident how important rookie defensive tackle Jordan Davis was to the Philadelphia Eagles’ defensive front when he was still on the field, his absence has made it abundantly clear.

Dating back to his time in college at the University of Georgia, Jordan Davis has always been a dominating force in defending the run. As an athletic freak in a 6-foot-6, 341-pound frame, he is simply impossible to stop with only one blocker committed to him. He can beat opposing offensive lines with his explosiveness off of the snap or simply drive opponents back with his immense functional strength. If you watched him in college, saw any part of his NFL Scouting Combine appearance, or some of the clips of him from preseason, none of that should come as a surprise.

Once he joined the Eagles, it didn’t take long to see what a special player he truly could be at the NFL level. As early in the preseason, Davis was making opposing offensive linemen look silly, simply manhandling them to get upfield and past the line of scrimmage. Even if he wasn’t always the one to make a tackle for a loss, the havoc that Davis’ presence created up front was impossible to miss.

Jordan Davis destroys the C and get the initial hit, Nakobe Dean shoots the gap and gets the TFL.

The stats have spoken for themselves as well since the regular season began. In Davis’ first “real” NFL game, he played just 22 snaps—32% of the Eagles’ total defensive snap count. But in the 22 snaps Davis was on the field, the Detroit Lions averaged just 2.9 yards per carry against Philadelphia’s front seven. In the 45 snaps that Davis was on the sidelines, the Lions gashed the Eagles for 10 yards per carry.

Obviously, there were other players rotating in and out with Davis and it’s a one-game sample size, but as the season has gone on, it’s a stat that has held up. Per NBC Sports Philadelphia, opposing defenses have averaged 5.10 yards per carry this season when Davis is off the field. When he’s on the field, that number slips down to just 3.87 yards per carry.

Philadelphia’s difficulty stopping the run without Davis was most apparent when the Eagles took on the Washington Commanders on Monday night. Washington ran the ball well all night with running backs Antonio Gibson and Brian Robinson Jr. combining for 130 rushing yards and a pair of touchdowns. Robinson especially put together a couple of crucial, angry runs in the red zone to get the Commanders in the end zone late in the first half, bullying the Eagles’ front seven and carrying a few defenders on his back along the way.

And here we have @BrianR_4 dragging two Philly defenders for a good 6 yards. pic.twitter.com/xvhdNllSEC

Brian Robinson would not be denied! @BrianR_4 | #HTTC

Those are the kinds of plays that don’t really happen when Davis is on the field. He can single-handedly create problems with blocking along the entire offensive front because of how easily he can push back opposing offensive linemen.

Again, he doesn’t have to be the one making the tackle to make an impact on the play. Once Davis locks onto a lineman, he can bench press him back into other blockers and make a mess out of the opposition’s blocking schemes, leaving other defenders to clean up.

I’m telling you, Jordan davis is THAT DUDE.

Throws off the timing of the run by pushing the center back 5 yards, then FOLDS HIM, and gets in on the TFL. pic.twitter.com/nhNTXm25N2

That said, he’s more than capable of making those plays himself when he gets the chance as well.

Jordan Davis just makes the center look silly on this play for a TFL.

He’s like that one kid in class that gets an A+ on the group project but didn’t contribute at all. 😂 pic.twitter.com/vUlXjPNse8

The Eagles know that they have an unbelievable, unique talent at nose tackle and have sorely missed Davis since he injured his ankle in Week 8. While they wait for their rookie difference-maker to recover, they’ll have to hope that veteran newcomer Linval Joseph can bridge the gap until Davis returns—which is Week 13 at the earliest. Unfortunately for Philadelphia, the weeks before a possible Davis return includes matchups against Jonathan Taylor, Aaron Jones, and Derrick Henry. Then, with impending matchups against Saquon Barkley, Justin Fields, and Ezekiel Elliott/Tony Pollard starting in Week 13, the Eagles can only hope Jordan Davis makes his comeback sooner rather than later.