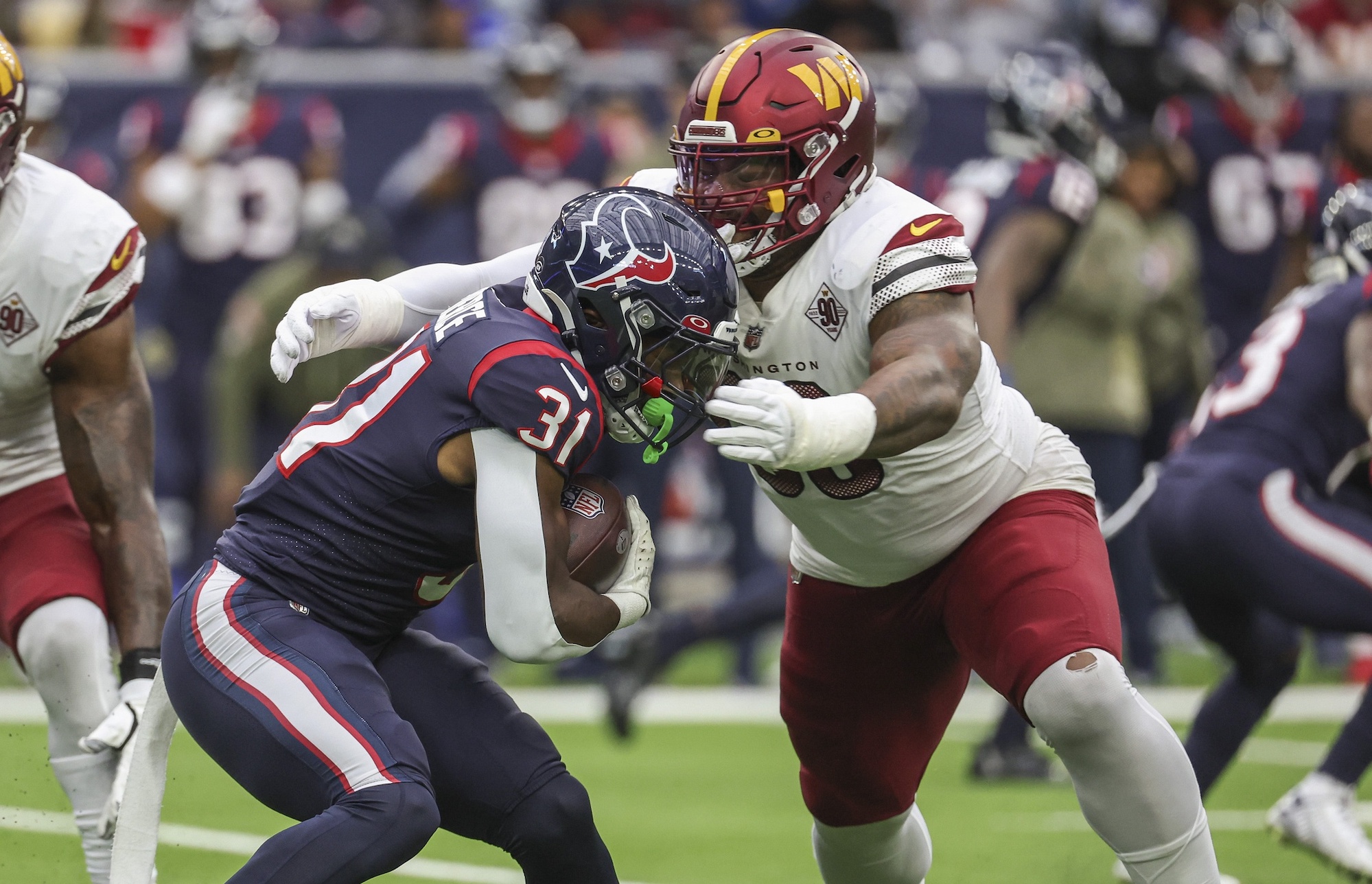 If you haven’t watched Washington Commanders defensive lineman Jonathan Allen at all this year, it’s been a whole lot of this through 11 games.

Embarrassing guards and overpowering centers, opposing front-fives have had absolutely no answer for the former 2017 first-round selection. A unique blend of size, speed, and power, while years prior showcased a player worth gameplanning for, 2022 has seen Allen progress into one of football’s most dominant interior defensive linemen. Sunday’s win over the Texans provided another showcase for the Alabama alum.

A talent that sits in the top five among all non-edge rushers in pressures and sacks (6.5), it was a harsh welcome to the league for Houston’s first-year left guard Kenyon Green. Green was a prospect lauded for his anchoring ability and athleticism within the tight spaces of the trenches, but Allen’s dominance from the opening snap spotlighted one of the more overpowering one-on-one performances all season long. And while you could play devil’s advocate and highlight the fact that Green is a rookie, you face who you face, and Green, unfortunately, found himself next on Allen’s reign of terror this fall.

A man standing at 6-foot-3 and 300 pounds, the ways in which Allen wins within the interior are usually seen from athletes with much less sand in their pants. Whether he utilizes his patented fake cross-chop bull/hump move that allows him to activate his hands early within the chest of the lineman, only to thrust his weight forward to knock guards off balance, or he’s angling outside on a stunt with teammate Montez Sweat (who sits top 10 in the NFL in pressures), it’s a case of pick your poison for offenses. And while Allen has been the hefty straw that stirs the drink for the burgundy and gold up front, it’s not just No. 93. Sweat has looked like a Pro Bowler the last month and a half of the campaign and Daron Payne has three sacks in his last four games (seven total). With Chase Young set to return next week against Atlanta, good luck to opposing offensive coordinators in your gameplanning endeavors.

A group long looked to become one of the NFL’s most intimidating units, all has come to fruition during the Commanders’ 5-1 mark over their last six games. A local product from Stone Bridge High School just minutes from Washington’s facility in Ashburn, VA, Jonathan Allen’s evolution into not just a talent that looks in line for his first All-Pro nod this fall, but a resounding leader in a locker room full of alphas, has Washington firing on all cylinders heading into Week 12.