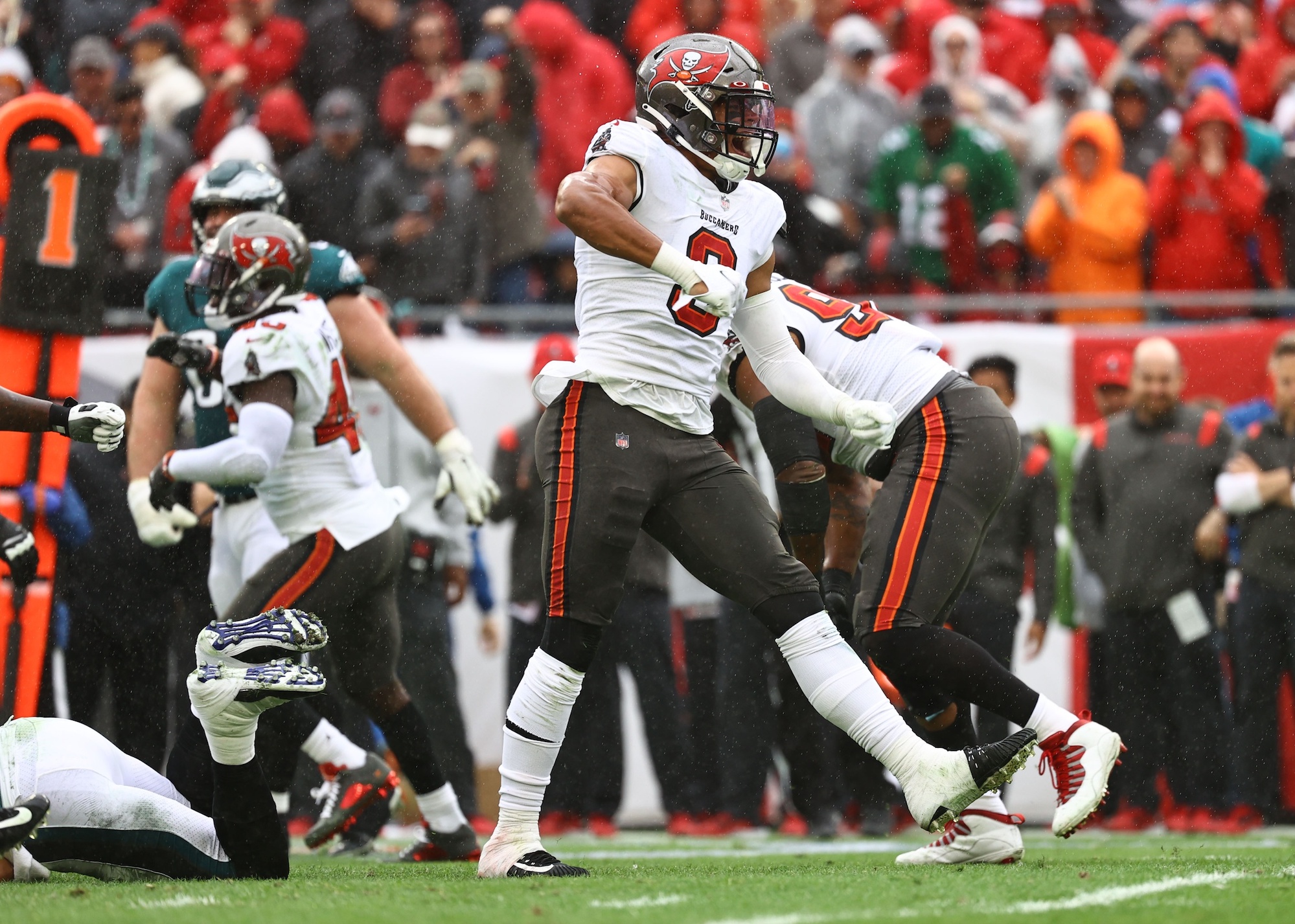 Why Buccaneers’ Joe Tryon-Shoyinka Is Poised For Breakout 2022 Season

In continuing The Draft Network’s breakout player series, I want to reiterate these aren’t necessarily guys that are new to their respective teams or even unknowns. Sometimes it’s just a matter of waiting your turn and that couldn’t be more true for the Tampa Bay Buccaneers’ Joe Tryon-Shoyinka.

I spent the last year getting to watch Tryon-Shoyinka firsthand and when I tell you I’ve never seen someone move the way he does off the edge, it’s not hyperbole. His 6-foot-5, 259-pound frame can bend and push with the best of them. He matches tactical precision with raw power and mark my words, you’ll be calling him the ‘baby-faced assassin’ this season now that he’ll have more opportunity to get after opposing quarterbacks.

You’ll almost never catch Tryon-Shoyinka not smiling… until he gets on the football field. How Tampa Bay was able to snatch him at No. 32 overall in the 2021 NFL Draft, I’ll never know. I wish you could have seen the faces of the Buccaneers’ defensive staff when they got him. They had loved him all throughout the pre-draft process and were (and remain) so excited about Tryon-Shoyinka.

His usage at the University of Washington provided him one of the most versatile skill sets for a prototypical outside linebacker. They didn’t shy away from moving him around on the front. He rushed from the five-technique, the wide-nine, etc., as expected. But then all of a sudden you see him in the three-tech, or in a 2i. He couldn’t have landed in a better pro system, under the ever-evolving and ever-confusing front deployed by now Head Coach Todd Bowles and defensive coordinators Kacy Rodgers and Larry Foote. He just had to be a little patient about it.

Though the Buccaneers’ system thrives on an outside rotation, Tryon-Shoyinka was still relegated to limited snaps behind the likes of Jason Pierre-Paul and Shaq Barrett. Tryon-Shoyinka played around 40% of the team’s defensive snaps overall. He did have a few games where he played significantly more and you saw flashes of his potential. Namely, in The Return when the Buccaneers played the New England Patriots in Week 4, Tryon-Shoyinka played 85% of the team’s defensive snaps on a rainy, windy, typical fall night in New England. He had 2.0 sacks.

It was one of six starts he made last season due mostly to Pierre-Paul dealing with compounding injuries. But now, Pierre-Paul remains a free agent and it’s Tryon-Shoyinka’s time to step up.

He’ll be paired opposite Barrett on either side of a defensive line that now includes Vita Vea, Akiem Hicks, first-round pick Logan Hall, Will Gholston, Rakeem Nuñez-Roches and Pat O’Connor. That could translate into the best defensive line rotation in the league as far as I’m concerned. And that could mean a lot easier of a time for the edge guys.

With the interior linemen eating up blockers, opposing offensive lines are going to have some tough decisions to make. Given that Tryon-Shoyinka is still a relative unknown, I’m not sure offenses will know how exactly to account for him. Or at least may underestimate him.

Therein lies the perfect opportunity for Tryon-Shoyinka to ‘break out’. The rush to judgment on his first season was something I took mental notes on—and something I won’t forget any time soon. Don’t say I never told you so when Tryon-Shoyinka racks up double-digit sacks in 2022.

That’s my prediction for Tryon-Shoyinka. He will have double-digit sacks this season as part of the Buccaneers’ aggressive defense that should go more on the offensive than ever in 2022. I’d look for Tryon-Shoyinka to be included in the Buccaneers’ flex package as part of the front four and just like at Washington, won’t be surprised to see him line up on the inside now and then. Bowles is going to have a field day with Tryon-Shoyinka should his teammates remain healthy. And I think that certainly qualifies as a ‘breakout’, don’t you?