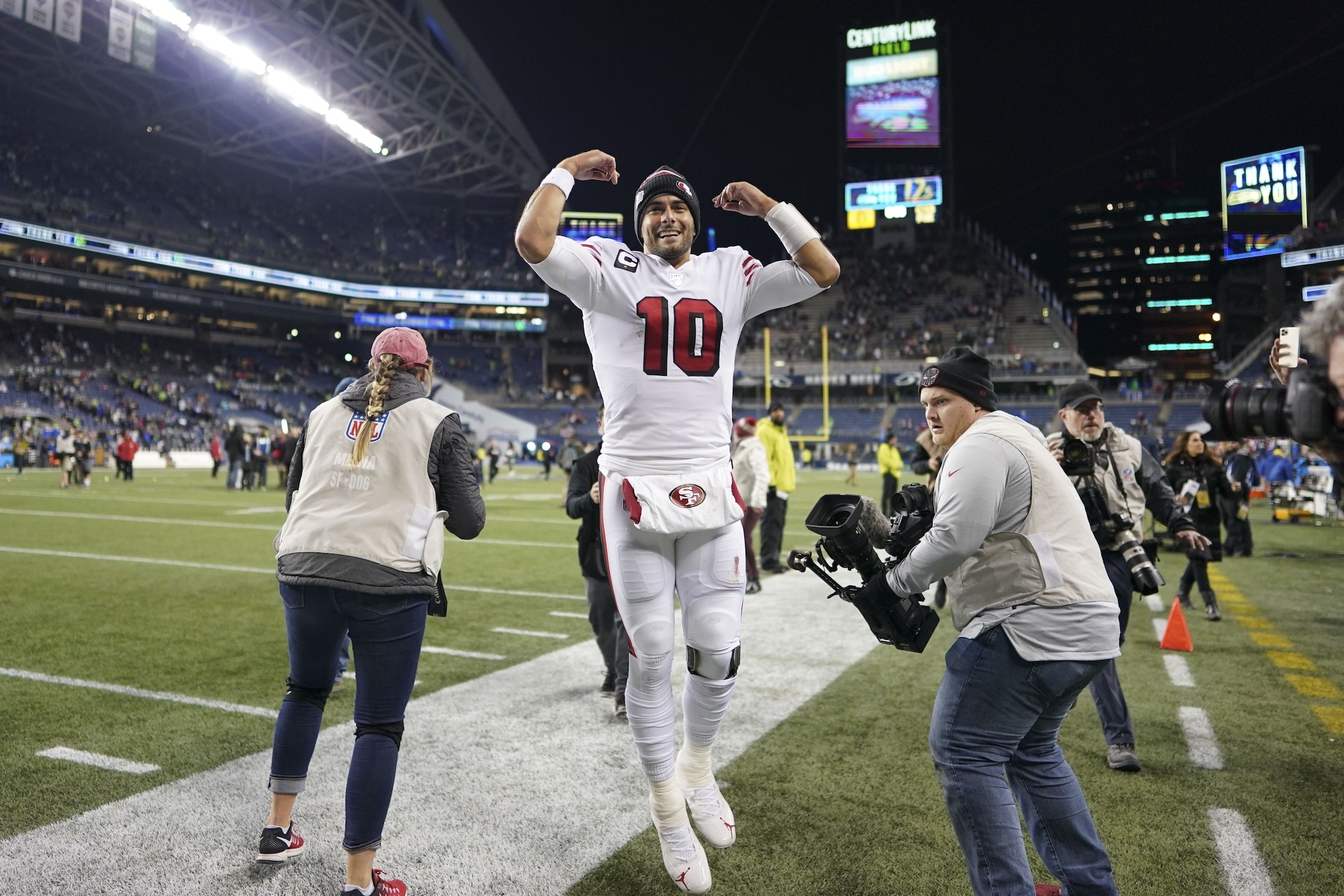 Why Jimmy Garoppolo Trade Makes Sense For Both Seahawks, 49ers

According to a report from ESPN’s Jeremy Fowler, the Seattle Seahawks have “internally discussed” making a trade for in-limbo San Francisco 49ers quarterback Jimmy Garoppolo. The 49ers were expected to trade Garoppolo earlier this offseason, but a proposal worth accepting has yet to materialize for several reasons.

The Seahawks should possess an interest in acquiring Garoppolo, who would immediately raise the ceiling for their offense. With the pool of potential suitors shrinking by the day, the 49ers shouldn’t fear trading Garoppolo within their division, although it would obviously qualify as unforeseen. An unprecedented agreement would be a win-win for all parties involved.

Seattle’s motivation for acquiring Garoppolo would be rather straightforward. The Seahawks currently own the most concerning situations at quarterback in the NFL. Trading Russell Wilson to the Denver Broncos left the Seahawks without an adequate starting signal-caller.  The Seahawks somewhat surprisingly decided against drafting a quarterback in the 2022 NFL Draft despite stepping to the podium on multiple occasions with an opportunity to do so.

The Seahawks received Drew Lock in the Wilson trade, who is tentatively expected to begin Week 1 under center. Veteran journeyman Geno Smith also remains in place and could threaten Lock’s expectation to win the starting job due to his knowledge of the offense. It represents the least inspiring quarterback battle as we swiftly approach training camp.

One could debate the merits of Garoppolo’s abilities as a starting quarterback, but few would place him in a tier below Lock and/or Smith. Garoppolo has undoubtedly been a more effective professional quarterback than the current in-house options. Seattle’s offense would immediately improve, and if you squint hard enough, you could imagine Garoppolo potentially leading an effective offense in Seattle—one that leans on a run-heavy approach with Chris Carson, rookie second-round pick Kenneth Walker III, and the returning Rashaad Penny in the backfield. Garoppolo would also inherit an above-average wide receiver corps that includes two elite playmakers in D.K. Metcalf and Tyler Lockett. An improved offensive line that’s spearheaded by first-round selection Charles Cross also helps.

It’s worth noting that Garoppolo continues to recover from offseason shoulder surgery and must pass a physical before any agreed-upon trade could come to fruition. The 49ers are preparing to officially usher in the Trey Lance era and every day they continue to roster Garoppolo further complicates matters under center. Lance should be allowed to prepare to serve as San Francisco’s starter without looking over his shoulder at a quarterback that’s previously led the team to one Super Bowl and two NFC Championship game appearances.

49ers General Manager John Lynch also possesses a bunch of financial-related reasons to consider trading Garoppolo to the Seahawks. San Francisco currently possesses roughly $5 million in cap space, via Spotrac. The 49ers are allegedly attempting to engage in discussions with superstar players Deebo Samuel and Nick Bosa regarding lucrative contract extensions, but may currently lack the financial flexibility necessary to complete such deals. Ridding themselves of Garoppolo’s $24.2 million base salary (and $26.950 million cap hit) is a must for a 49ers franchise that is currently up against the cap with plenty of contracts on their to-do list.

Speaking of, Garoppolo’s contract would also need amending on both sides. The former Eastern Illinois product is set to enter the final year of his contract in 2022. The Seahawks would likely be unwilling to trade for Garoppolo unless the two sides reached an agreement on a new-look deal that would guarantee he continues playing in Seattle beyond this upcoming season. It’s a caveat worth acknowledging.

Garoppolo was loosely linked to an unexpected move to the Tampa Bay Buccaneers, but those rumors have been refuted by his agent Don Yee. We’ve officially arrived at silly season for Garoppolo, further proving that the list of potential suitors is as short as ever. It’s precisely another reason why the 49ers shouldn’t fear making a trade within their division. Lynch and Shanahan essentially agreed they couldn’t win a Super Bowl with Garoppolo at the helm, which served as the motivation to part with so much draft capital in order to move up in the 2021 draft and select Lance. The 49ers should trust their evaluation process as a result, and shouldn’t fear Garoppolo winning elsewhere.

The 49ers would likely have to agree to eat a sizable portion of Garoppolo’s salary in a trade with the Seahawks, much like the Cleveland Browns just did when trading fellow disgruntled quarterback Baker Mayfield to the Carolina Panthers. The slow-moving process has backed San Francisco into a corner that will forfeit much of its negotiating power. If Lynch had to eat somewhere between $5 and $10 million in order to trade Garoppolo to Seattle, it would still prove beneficial enough to pull the trigger.