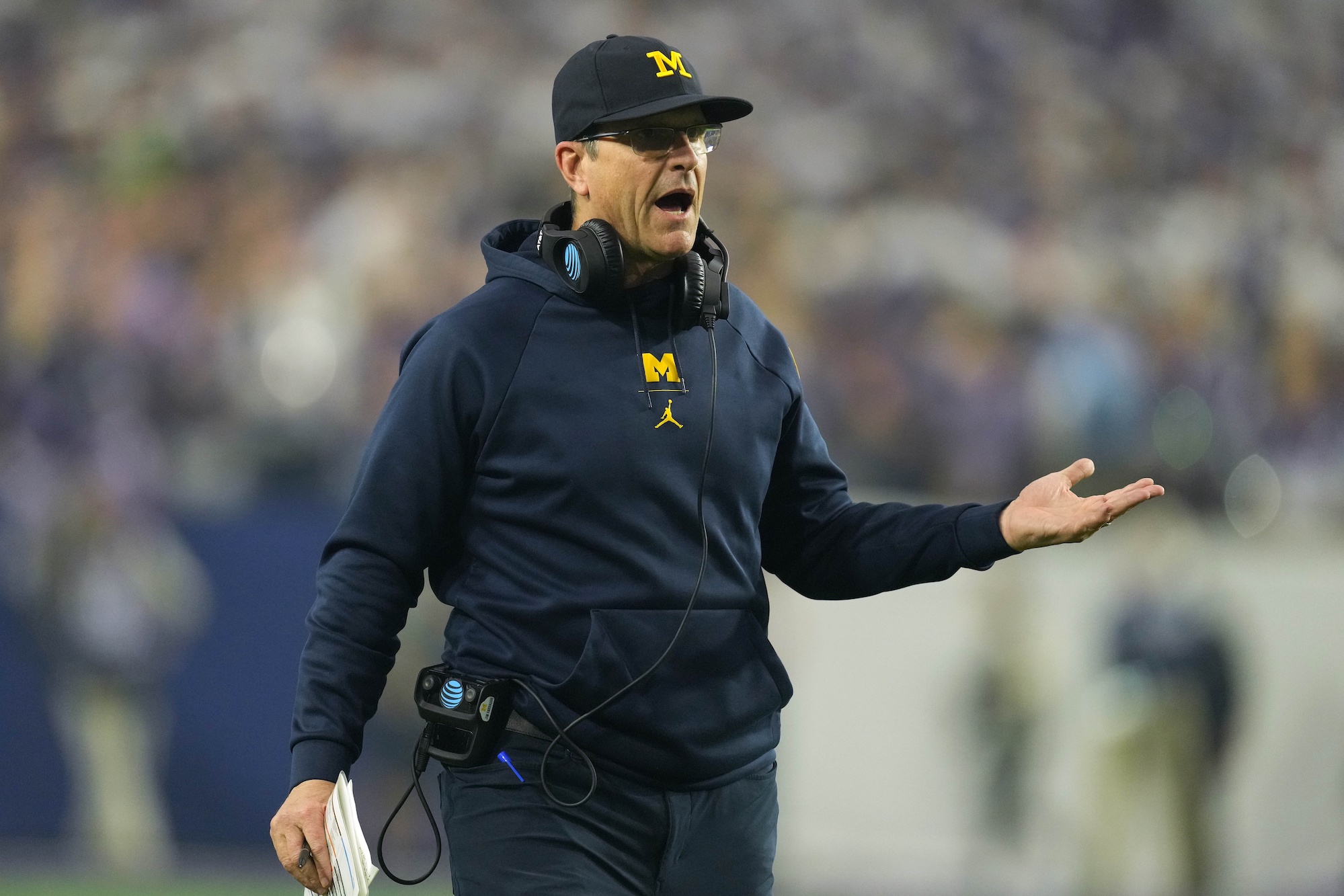 Jim Harbaugh Returning To NFL? Where Could He Go?

Michigan Wolverines head coach Jim Harbaugh is expected to receive interest from NFL teams, according to multiple reports. Similar reports indicate the feeling may be mutual. Harbaugh rejected advances from the NFL last offseason, but this summer could welcome a different outcome.

The Wolverines were unexpectedly upset by TCU in Saturday’s College Football Playoff semifinal. Harbaugh’s Wolverines put forth an extremely disappointing performance following an undefeated regular season that ended with a consecutive Big Ten title and another dominant victory over rival Ohio State. Where does Harbaugh go from here?

The 59-year-old Harbaugh may be questioning Michigan’s ceiling following another premature exit. Harbaugh flirted with the Minnesota Vikings’ opening last year, only to return to Ann Arbor via a contract extension. Harbaugh’s latest deal contains a buyout of just $3 million to be paid to Michigan should he depart the program. That amount won’t scare away would-be suitors.

The Broncos have already fired head coach Nathaniel Hackett. All indications are that general manager George Paton and John Elway will be “ultra-aggressive” in pursuit of their top candidate, and they’ve already been connected to Harbaugh throughout the early stages of this process. It makes sense from Denver’s viewpoint.

The Broncos can’t afford to swing and miss again following the Hackett debacle. Broncos quarterback Russell Wilson enjoyed a nightmarish debut campaign in Denver after the Broncos parted with premium capital to acquire him and sign him to a five-year extension. The Broncos are committed to Wilson whether they like it or not, and hiring a coach that could unlock his potential remains paramount.

Would Harbaugh possess an interest in Denver’s opening? That may depend on his opinion of Wilson, especially after his lackluster season. Harbaugh’s relationship with Elway could also play a role.

Indianapolis’ quarterbacking situation isn’t great, but general manager Chris Ballard could offer Harbaugh an opportunity to hand-pick their next signal-caller. The Colts currently own the No. 5 selection in the 2023 NFL Draft, and a Week 18 loss could position them even higher. The Colts could realistically land Bryce Young, C.J. Stroud, or Will Levis. That should intrigue Harbaugh.

The emotional connection can’t be ignored. Harbaugh played four seasons (1994-97) for the Colts and could embrace a reunion with a familiar organization. Irsay could tug on Harbaugh’s heartstrings.

The Cardinals are the lone franchise to make this list without currently possessing an opening. The 4-12 Cardinals have lost six consecutive contests and could end the campaign on a seven-game losing streak. Head coach Kliff Kingsbury has routinely come under scrutiny and will be reevaluated at season’s end.

The health of Cardinals quarterback Kyler Murray could impact Harbaugh’s decision. Murray suffered a season-ending torn ACL injury in mid-December that could negatively impact the first two months of Murray’s 2023 campaign. Arizona doesn’t currently appear to be a particularly intriguing option, but it’s worth noting the location is closer to Jim Harbaugh’s hometown of Palo Alto, California.