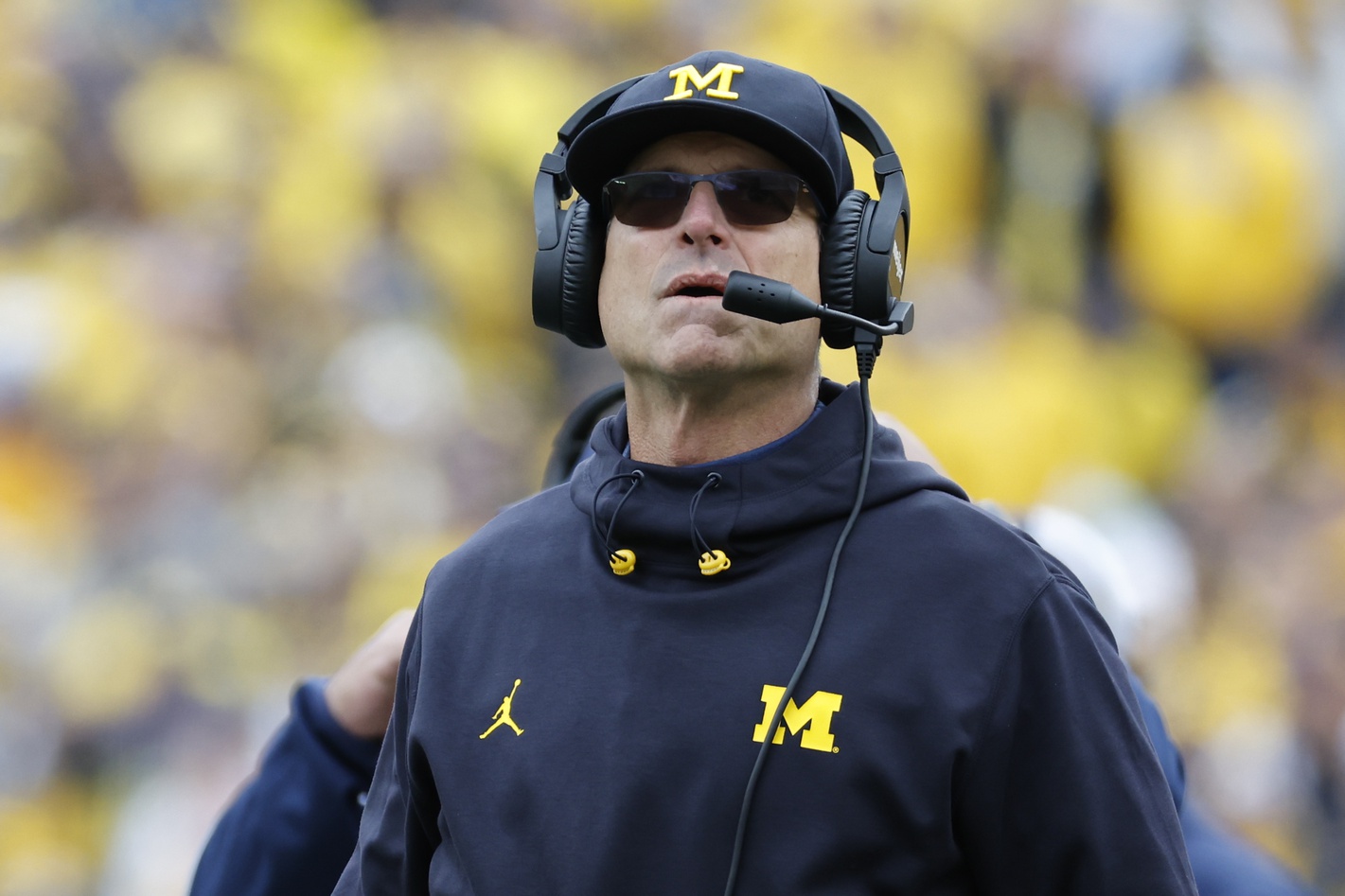 Michigan Wolverines head coach Jim Harbaugh has been linked to the Carolina Panthers, according to multiple reports. Jim Harbaugh is expected to draw interest from multiple NFL franchises this offseason. There are reasons to believe he may be intrigued by the Panthers’ opening.

The most important factor when a coach is considering a job opening is the situation at quarterback. Harbaugh may receive an opportunity to handpick his quarterback in Carolina. The Panthers currently possess the No. 9 overall selection in the 2022 NFL Draft while preparing for a Week 18 finale against the New Orleans Saints. Carolina can’t break into the top five.

In-house scout Kyle Crabbs has the Panthers selecting Kentucky quarterback Will Levis in his latest NFL mock draft. Crabbs has the Panthers trading up to fourth overall. The Panthers could realistically pursue a trade-up to land their preferred target. They’re within striking distance of Bryce Young and C.J. Stroud as well. A former quarterback himself, Harbaugh would likely approve, and maybe even spearhead, such a move. The last time Hatbaugh helped an NFL franchise trade up for a quarterback, the San Francisco 49ers drafted Colin Kaepernick and experienced consistent success with Harbaugh at the helm.

Current starting quarterback Sam Darnold has played admirably down the stretch but is set for unrestricted free agency. Panthers general manager Scott Fitterer could opt to bring Darnold back via a short-term contract, but the Panthers will need to do better than that to convince a candidate of Harbaugh’s magnitude. It would have to be Darold and a young quarterback.

There’s also a notable connection tying Harbaugh to Carolina. Panthers area scout Joel Patten served as the 49ers’ director of college scouting during Harbaugh’s first two seasons in San Francisco. Patten could receive a promotion to a more prominent role should Harbaugh take the job. Tom Gamble, who Harbaugh recently brought to Michigan after plucking him away from Jacksonville’s front office, would be another candidate to join Harbaugh in Carolina.

The Panthers job is far from perfect. There are salary cap-related concerns to navigate through. The Panthers are set to possess just $1.7 million in 2023 cap space, according to Spotrac. Veteran releases, contract restructures and creativity will be required to fill out a competitive 53- man roster in Carolina. You know what helps? An ascending quarterback on a cost-controlled rookie contract. Releasing Shaq Thompson alone creates approximately $13.1 million in much-needed cap space.

Besides, which opening is a sure thing? The Denver Broncos are tied to a struggling Russell Wilson for the foreseeable future and play in a division alongside Patrick Mahomes and Justin Herbert. Should the Arizona Cardinals fire Kliff Kingsbury, the health of Kyler Murray following a season-ending knee injury throws an unknown wrench in their situation for 2023.

Harbaugh once played for the Indianapolis Colts. They’re in a similar situation to Carolina at quarterback, but owner Jim Irsay and general manager Chris Ballard may prefer to dictate that decision. The road to full control would be clearer in Carolina unless Irsay fires Ballard, which doesn’t seem likely as of this writing.

Not to mention the Panthers play in a more winnable division when looking ahead to 2023. Tom Brady’s impending departure blows the division wide open. You may think something similar about the lackluster AFC South, but the outlook of the Trevor Lawrence-led Jacksonville Jaguars is significantly brighter than any team in the NFC South. The Panthers have more young talent than any of their inner-divisional competitors.

Interim head coach Steve Wilks has done an admirable job, but Wilks had a better chance of convincing ownership to remove his interim tag had the Panthers defeated the Tampa Bay Buccaneers in Week 17. The Panthers possessed an opportunity to overtake first place in the NFC South but fell short of that goal. Wilks should still garner serious consideration from owner David Tepper, but his candidacy became weaker in the face of that defeat.

Tepper is an energetic owner that’s rarely denied what his heart truly desires. If Tepper views Harbaugh as the potential savior of his struggling Panthers franchise, expect him to make an aggressive move to land his services. Don’t eliminate the Panthers from the Jim Harbaugh sweepstakes until analyzing their situation from all angles.