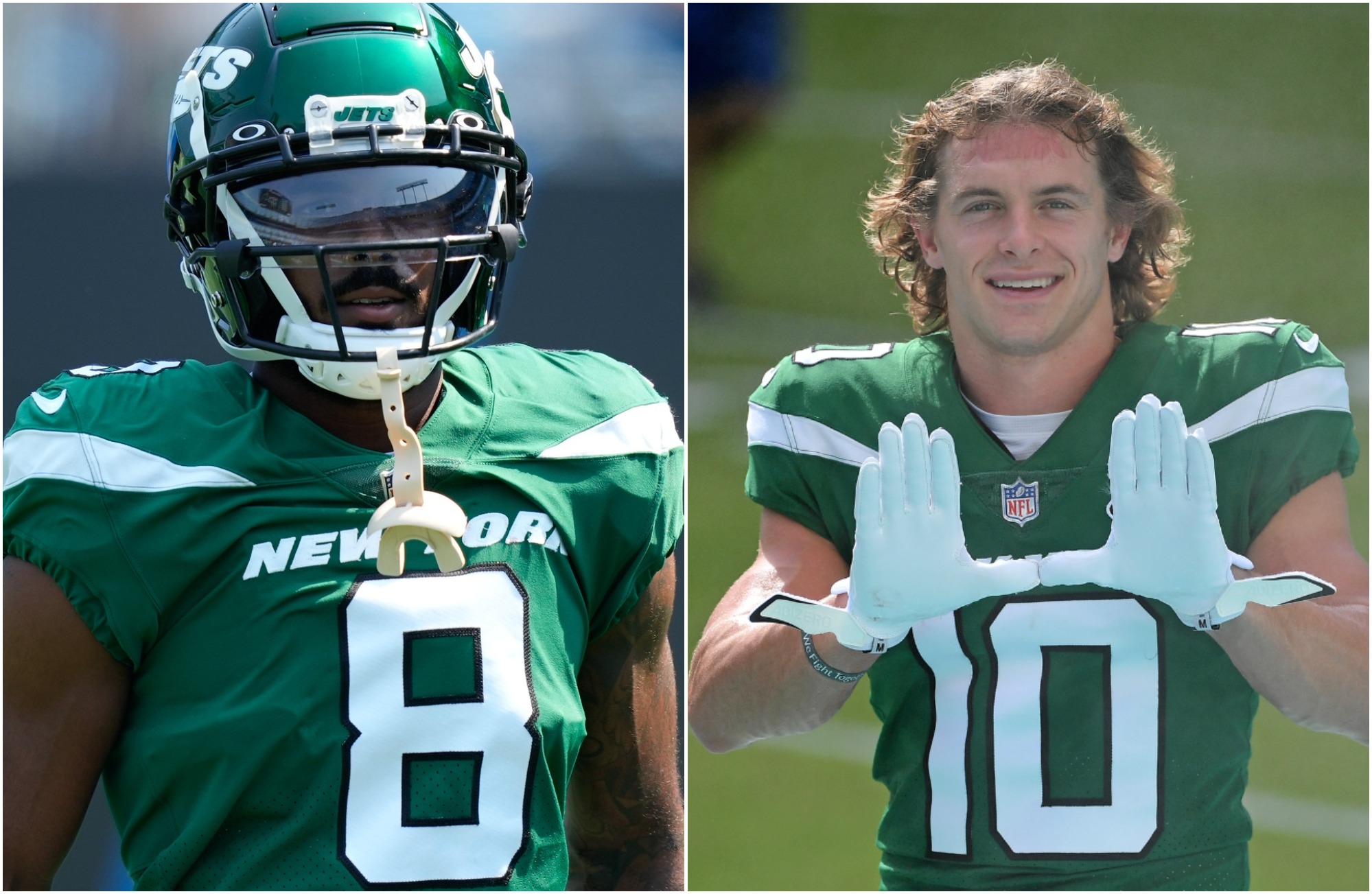 Who Should Be Jets’ Primary Slot WR?

New York Jets Head Coach Robert Saleh has stressed versatility this offseason when discussing his new-look group of pass-catchers. One of the biggest questions the Jets are facing in that department occurs at the increasingly important slot position. The Jets are still “working through” the options, but second-year wide receiver Elijah Moore qualifies as the correct candidate to replace the vacancy left behind by Jamison Crowder’s departure.

Jets General Manager Joe Douglas was hellbent on improving his team’s wide receiver corps this offseason. Douglas aggressively pursued the available Tyreek Hill, who accepted an offer to play for the Miami Dolphins instead. Douglas and the Jets were routinely (or in some cases, loosely) tied to acquiring various veteran receivers that were available for trade. Having struck out on the veteran market, Douglas ultimately drafted former Ohio State receiver Garrett Wilson with the No. 10 overall selection in the 2022 NFL Draft. Wilson is expected to start on the boundary opposite Corey Davis, who is entering his second season as a Jet, and is essentially exclusively a boundary player. Wilson’s arrival makes Moore a clear-cut candidate to operate from the slot in three-receiver sets, although there are several moving pieces to take into consideration.

The Jets drafted Moore with the No. 34 overall selection in the 2021 NFL Draft. Moore was enjoying a fruitful rookie campaign prior to suffering a season-ending quad injury in Week 13. Moore immediately hit the ground running as a first-year receiver, recording 43 receptions for 538 receiving yards and five touchdowns. He added 54 rushing yards and another score via the ground game. Moore led all Jets receivers in yards and touchdowns.

Moore aligned both outside and in the slot at Ole Miss. His dynamic receiving abilities were often on display at both spots. Moore’s agility and short-area quickness allowed him to overcome some size limitations while routinely defeating press-man coverage on the outside. Moore spent the majority of his rookie season playing outside for the Jets (nearly 71% of Moore’s snaps were out wide) while the veteran Crowder manned the slot.

Placing Moore in the slot going forward would signal a bit of a change, but would also satisfy Saleh’s need for versatility. Moore can move outside on occasion while the rookie Wilson moves inside. Wilson’s short-area agility had many of our in-house scouts believing he’s a natural for the slot position, where he’d be afforded extra room to operate and create space. Having Moore and Wilson mix and match would create headaches for opposing defenses.

When analyzing the Jets’ options in the slot, we can’t completely rule out Braxton Berrios. Berrios is absolutely in the mix and serves as the biggest threat to take snaps away from Moore and/or Wilson in the slot.

Berrios made the most of his late-season opportunities in 2021 following a string of injuries to Jets receivers. Over New York’s final four contests of the regular season, Berrios secured 20 receptions for 180 receiving yards and one touchdown, while also scoring two additional touchdowns as a ball carrier and one special teams touchdown. Berrios’ late-season performances led to him possessing some leverage in contract discussions and he ultimately scored a two-year extension worth $12 million earlier this offseason.

The Jets aren’t paying Berrios six million annually to warm the bench, so it will be interesting to monitor his usage throughout 2022. Berrios’ ability to line up in multiple spots (in the backfield included) makes him a prime candidate for manufactured touches via creative looks. Berrios’ size limitations (5-foot-9, 190 pounds), paired with his ability to work underneath the coverage, make him a natural in the slot. Unlike Wilson and Moore, Berrios isn’t an option to play outside.

While Saleh and the Jets will continue to sort through their options both outside and in the slot, general manager Douglas is surely satisfied with the abundance of options he’s presented his coaching staff with. Revamping the Jets’ pass-catching corps was a clear goal for Douglas, who now rosters four quality receivers and three new tight ends: C.J. Uzomah, Tyler Conklin, and Jeremy Ruckert. Moore should be the Jets’ slot receiver, but the possibilities are endless, and that’s the point to keep in mind. This is a good problem for New York to have.