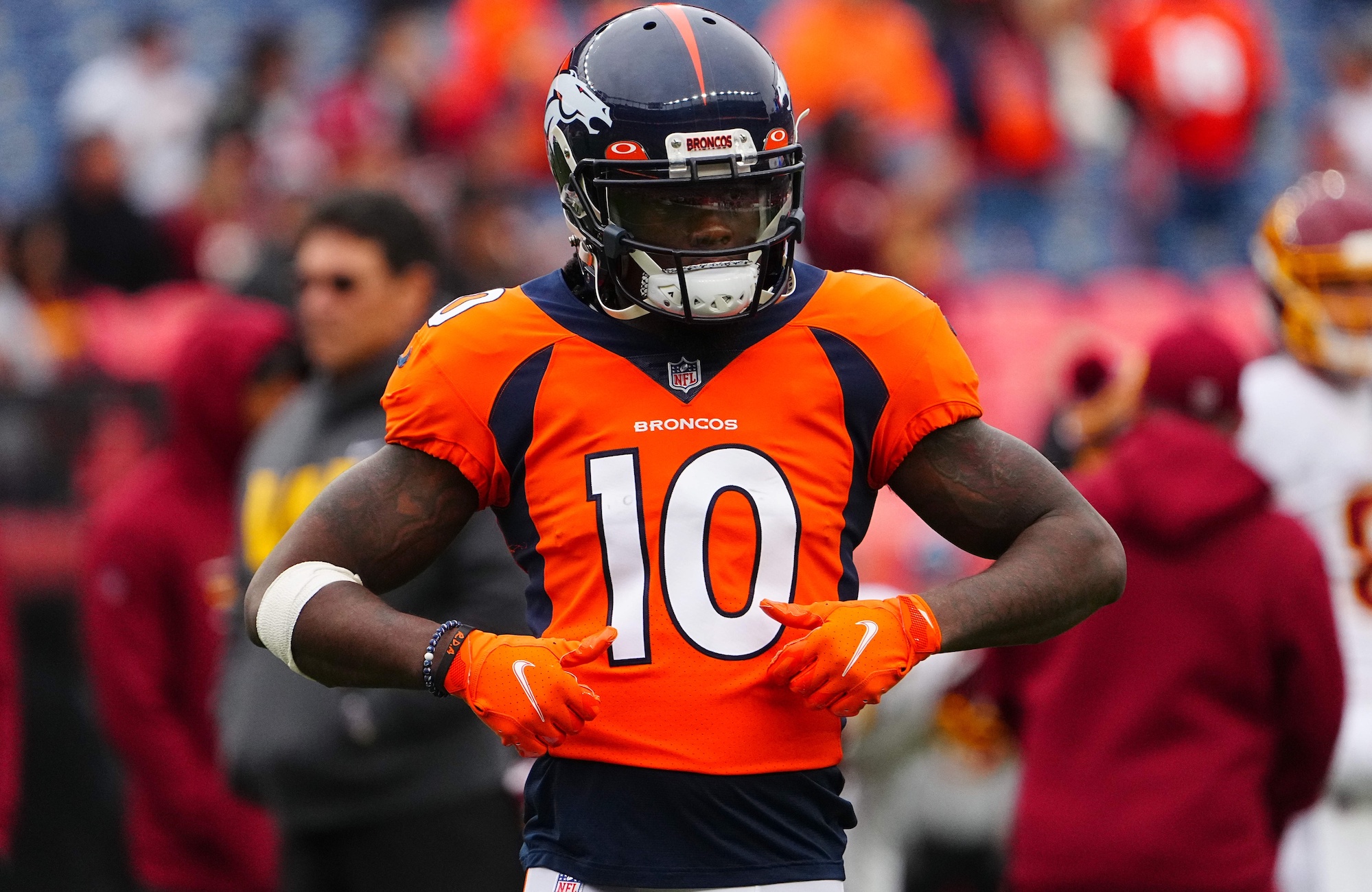 Here’s Why Packers Need To Trade For Jerry Jeudy

The 3-4 Green Bay Packers have suffered three consecutive defeats at the hands of the New York Giants, Washington Commanders, and New York Jets. Their struggling offense ranks 20th in total yards gained per contest (331.6/game) and 23rd in points scored per outing (18.3). For contextual purposes, it’s 0.3 points more than their arch-rival Chicago Bears (18.0) are scoring.

The Packers entered the campaign with legitimate questions at the pass-catching positions and those concerns have proven to be fruitful. The Packers are struggling with drops and missed assignments on a weekly basis. Starting quarterback Aaron Rodgers expressed frustration with the situation by blatantly throwing several teammates under the bus on a recent appearance on The Pat McAfee show.

Rodgers has also proclaimed that he expects his Packers to be buyers at next week’s trade deadline (Nov. 1). A wide receiver would obviously top Rodgers’ wishlist given his recent actions. Additional reports indicate Packers general manager Brian Gutekunst is hoping to acquire a receiver that remains on a rookie contract. That line of thinking makes sense. The Packers are currently projected to be $2 million above next year’s salary cap, per Spotrac. Trading for a high-priced receiver may not be possible.

As the Packers continue searching for a young but productive pass-catcher to acquire, Broncos wide receiver Jerry Jeudy should emerge as their preferred target.

The disappointing 2-5 Broncos have allegedly received calls on Jeudy’s availability. Furthermore, the Broncos will consider trading EDGE Bradley Chubb if they lose to the Jacksonville Jaguars in Week 8, according to multiple reports. Broncos general manager George Paton may be preparing for a firesale. Jeudy may realistically be a part of the outgoing group.

Jeudy has recorded 24 receptions for 386 yards and two touchdowns through seven games this season. Paton inherited Jeudy from Denver’s previous regime. Jeudy is currently in the third season of his four-year rookie contract, which meets the Packers’ alleged criteria. Jeudy remains on a cost-controlled deal through 2023. He’s set to earn a base salary of $2.681 million next season, via Spotrac. As a first-round selection in the 2020 NFL Draft, the Packers would have the option to trigger the fifth year on Jeudy’s contract, which would keep him signed through 2024 at a team-friendly price.

There’s no like-for-like replacement for Davante Adams, but Jeudy would bring an element of craftiness to Green Bay’s offense that’s been sorely lacking since Adams’ stunning departure. Jeudy is an excellent route-runner that understands the importance of timing and efficiency within the structure of a passing offense. Adams is often touted as the league’s best route-runner for good reason, and Rodgers has missed that sense of chemistry and reliability. Precise route-running was one of Jeudy’s calling cards as an NFL prospect ahead of the 2020 draft.

Jeudy would also replace some of the flexibility the Packers lost in Adams. Jeudy is capable of playing on the boundary and in the slot on a snap-by-snap basis. Jeudy would help the Packers create the mismatches offensively they’re not currently creating. Green Bay’s offense has become predictable and easier to defend against as a result. They lack general flexibility and they’re simply not winning one-on-one. Personnel-related issues are the root of Green Bay’s offensive ineptness.

Jeudy is averaging an explosive 16.1 yards per reception this season. He’s also creating for himself post-catch by averaging 7.2 yards after the catch per reception, via Pro Football Focus. The Packers lack those types of playmakers. Rodgers is averaging a middling 6.9 adjusted yards per attempt as a result.

The ongoing development of second-round receiver Christian Watson is currently hamstringing Green Bay’s offense. Watson is struggling with drops and he’s still mastering Matt LaFleur’s playbook. The Packers have been forced to rely on fourth-round rookie Romeo Doubs and aging receivers like Randall Cobb and Sammy Watkins as a result.

The Packers remain in win-now mode with an aging Rodgers under center despite their below .500 record. A dwindling Super Bowl window may force Gutekunst to be a buyer at the trade deadline. Identifying a receiver that can help the Packers immediately while also remaining a part of their future is crucial to the evaluation. Jeudy is the perfect target.