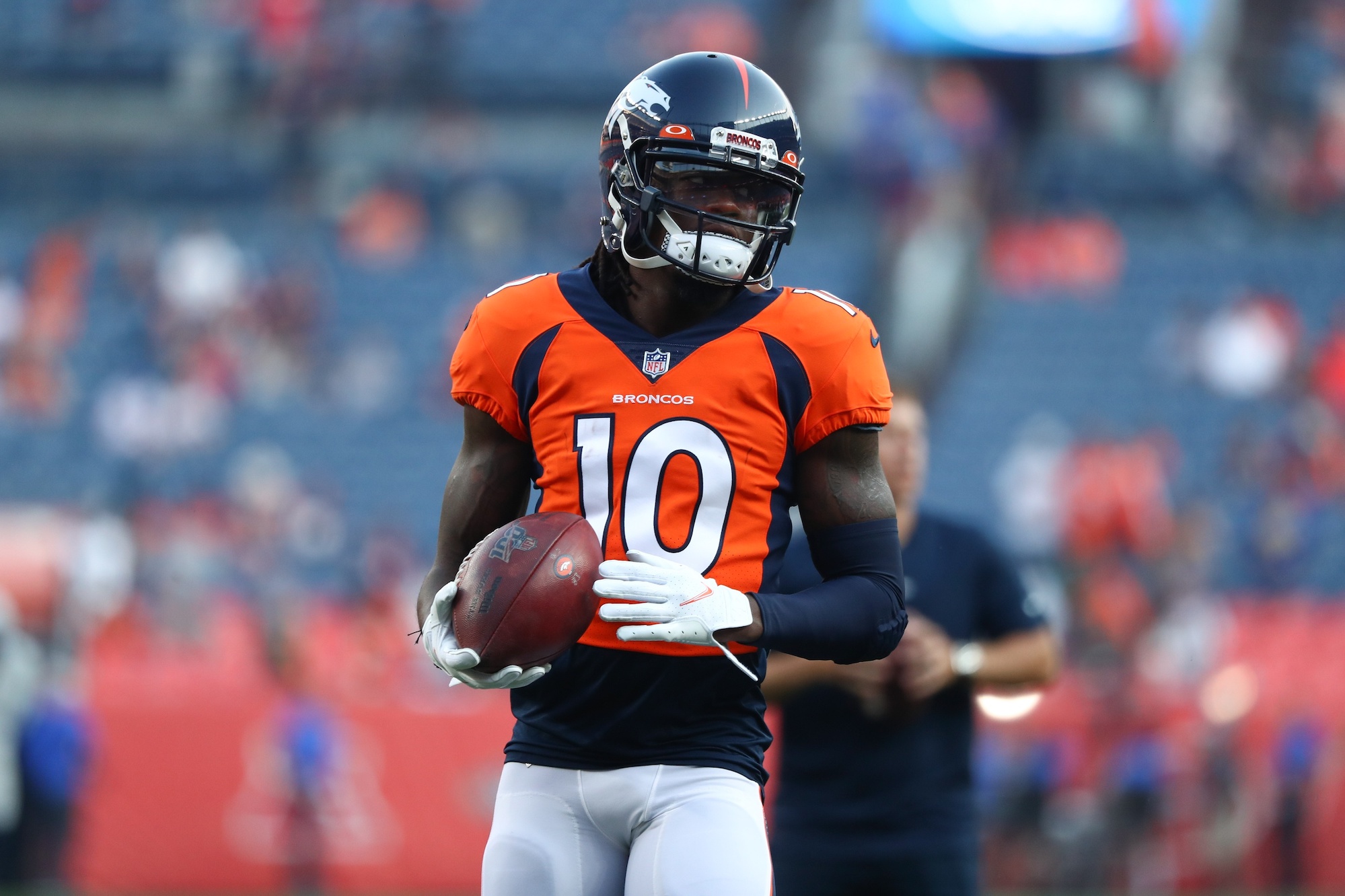 3 Teams That Could Trade For Jerry Jeudy

The disappointing 2-5 Denver Broncos are receiving calls on the availability of wide receiver Jerry Jeudy via trade, according to reports. Broncos starting quarterback Russell Wilson and Jeudy have failed to get on the same page this season. Jeudy has recorded 24 receptions for 386 yards and two touchdowns through seven games.

Jeudy is in the third season of his four-year rookie contract. He remains on a cost-controlled deal through 2023. As a first-round selection in the 2020 NFL Draft, an acquiring team could exercise the fifth-year option on Jeudy’s contract, which would keep him signed through 2024. It’s a benefit that may increase the amount of interest Jeudy receives before the Nov. 1 trade deadline.

Heading into Monday’s contest with the New England Patriots, the Bears are averaging a league-low 122.8 passing yards per contest. Quarterback Justin Fields is being hamstrung by what’s arguably the worst group of pass-catchers across the league. Head coach Matt Eberflus won’t take the training wheels off Fields until he’s surrounded by a stronger supporting cast. That’s where general manager Ryan Poles comes in.

Poles won’t be an aggressive buyer at the trade deadline as he continues rebuilding his Bears roster through upcoming drafts, but Jeudy represents a unique opportunity. Jeudy is a 23-year-old receiver whose arrow continues to point up. Jeudy could be a part of the Bears’ ascension. Parting with draft capital in exchange for a proven commodity such as Jeudy could prove to be fruitful for the Bears.

Darnell Mooney hasn’t experienced the breakout campaign many believed he was destined for. Mooney has been a victim of the Bears’ non-existent passing attack. Pairing Mooney with Jeudy would give the Bears the respectable one-two punch at receiver they currently lack.

It’s time for you to believe in the Giants. Brian Daboll’s never-say-never squad improved to an astounding 6-1 following Sunday’s gritty win over the Jacksonville Jaguars. The Giants’ odds to qualify for the postseason are now at 87%, via FiveThirtyEight. Daboll is a legitimate contender to capture the NFL Coach of the Year award.

The Giants continue stacking victories despite an ongoing concerning situation at receiver.  Kadarius Toney hasn’t played since mid-September and has fallen out of favor with the Giants’ offensive staff. The high-priced disaster that is Kenny Golladay has recorded two catches this season and has been sidelined for several weeks with no clear-cut timetable for his return in sight. Sterling Shepard suffered a season-ending injury, and the likes of Richie James and David Sills are playing snaps out of necessity.

Schoen isn’t about to sell the Giants’ future, but Jeudy would slot into their starting lineup while also being a focal point of next year’s offense. Trading for Jeudy would help the Giants both immediately and in the future. Schoen should consider the possibility.

The Ravens entered the season with legitimate question marks at receiver and the return of Rashod Bateman from injury didn’t move the needle forward. Ravens quarterback Lamar Jackson accounted for just 94 net passing yards in Sunday’s three-point win over the Cleveland Browns. It was a concerning follow-up for a passing offense that was held under 200 passing yards in Week 7.

Jeudy’s route-running prowess would add some much-needed efficiency to Baltimore’s passing offense. Jeudy would do damage in the short-to-intermediate areas of the field in Baltimore. Pairing Jeudy alongside Jackson and Bateman would add another explosive layer to the Ravens while making them a more balanced unit.