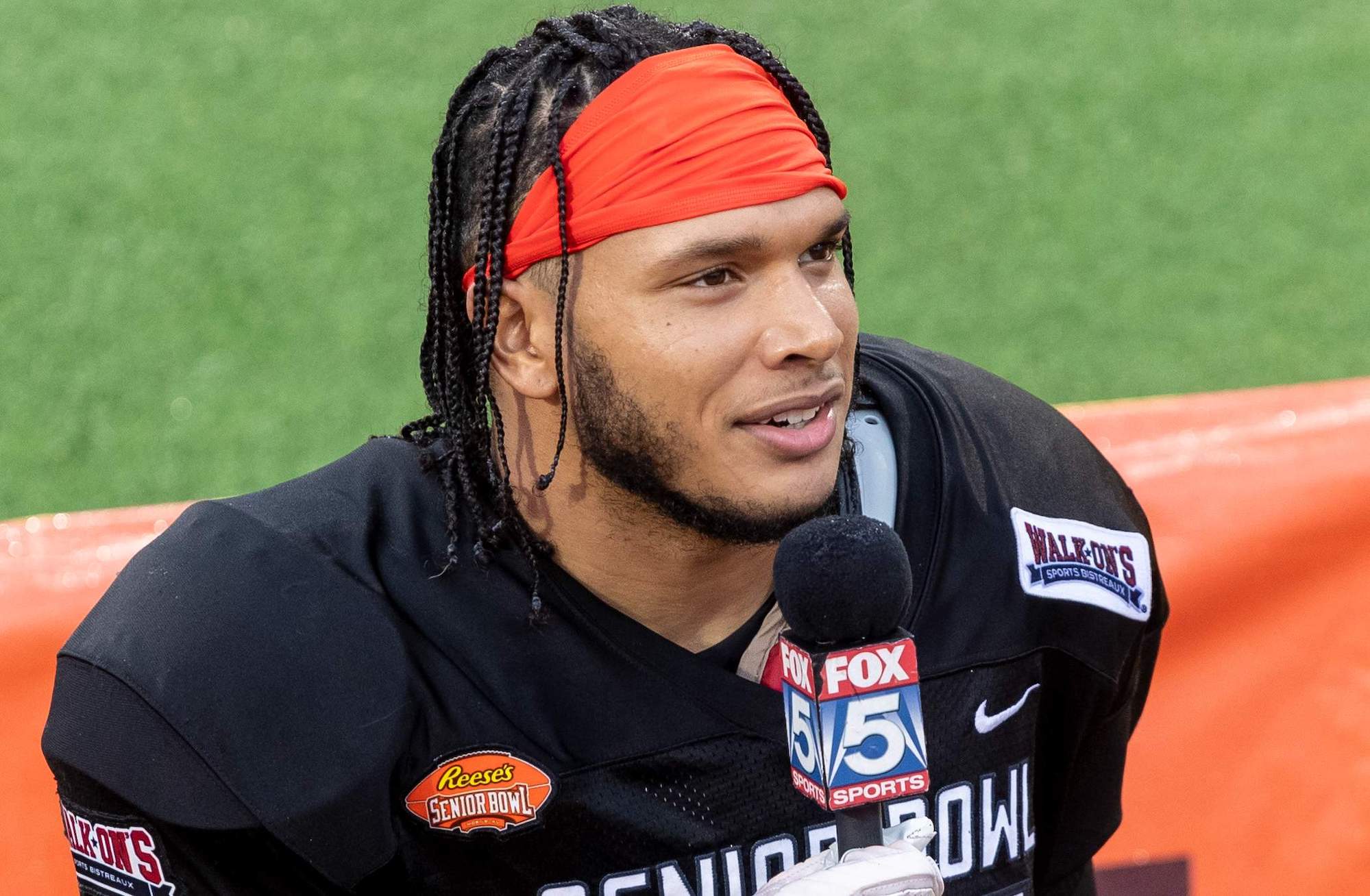 Finding consensus opinions regarding a draft class is rare, but those who have taken the time to evaluate the 2022 crop of prospects universally agree that the group of EDGE defenders is the deepest in the draft. Whether it’s blue-chip talent at the top of the draft, projected starters on day two, or exciting developmental options on day three, the class is loaded with guys that can get after the quarterback. In our most recent TDN100 update, 17 EDGE defenders were ranked, including six in the top 30.  At the top of the class is Aidan Hutchinson and Kayvon Thibodeaux, but things get interesting beyond those two. Before the Senior Bowl, the likes of David Ojabo, Travon Walker, and George Karlaftis were firmly in the conversation, but after a dominant week of Senior Bowl practices, Jermaine Johnson has more than entered the chat. To the surprise of nobody who studied his film at Florida State, Johnson has completely dominated in Mobile. I’d make the case that he has been the best football player at the Senior Bowl regardless of position. He’s firmly EDGE3 at this point in the process and it isn’t a stretch to bring him into the mix when considering Hutchinson and Thibodeaux at the top of the board. Johnson began his career in the JUCO ranks before transferring to Georgia, where he spent two seasons before ending his career at Florida State. He drastically improved his draft stock at FSU. At Georgia, Johnson was buried on the depth chart and played sparingly despite making his share of plays when he had a chance to get on the field. In a rotational role, Johnson flashed his playmaking ability and racked up five sacks in 2020 despite less than 95 pass-rush snaps. All Johnson needed was an opportunity to play in an expanded role, which he received at Florida State. In 12 games with the Seminoles in 2021, Johnson collected 70 tackles, 17.5 tackles for loss, and 11.5 sacks en route to being named the ACC Defensive Player of the Year. After studying his film and writing my scouting report, it became clear to me that Johnson is a first-round talent. His impact on a game-by-game basis was undeniable and the way he was making plays translated perfectly to the next level. As a pass rusher, Johnson has dynamic quickness to go with length, power, rush variety, vision, and a motor that always runs hot. My favorite component of Johnson’s pass-rushing skill set is the multitude of ways he can beat blocks and affect the quarterback. He understands how to read the set of the offensive tackle and attack. His pass-rush repertoire is fully loaded with moves and counters to get home. As a run defender, Johnson has tremendous processing skills and consistently finds the football and makes plays. He plays with firm hands, extension, and discipline to maintain his run fit and set a firm edge. Johnson features a balanced skill set with very few limitations and profiles well to any scheme. For those that weren’t familiar with Johnson, the Senior Bowl has been a wonderful showcase of his talents. He is turning heads and is the talk of the town. Whether it’s setting the tone in drills, overwhelming offensive linemen in one-on-one drills, or dominating in full team sessions, Johnson has stolen the show. One of my favorite reps that Johnson had from practice came against Tulsa OT Chris Paul because it encapsulates so much of what makes Johnson so dynamic. Johnson sells an outside rush that draws Paul out of his set and forces him to shoot his hands to protect his near hip. From there, Johnson showcases outstanding vision to recognize the opportunity to attack the B-gap and in one continuous motion redirects inside, swipes Paul’s hands, crosses his face, and wins the rep. There is no segmentation in how Johnson executes a high-level rush. https://twitter.com/BenGlassmireNFL/status/1489299678331998210 While I could share highlights from Johnson all day long, the following win over Max Mitchell showcases how he can win with power. But it’s not just as simple as running through Mitchell that wins this rep—it’s how he creates that opportunity. Notice the footwork Johnson uses on this play. Within his first two steps, he’s able to sell an outside rush before flattening and blowing through Mitchell’s outside shoulder. He executes with ideal leverage and placement before cornering and finishing. https://twitter.com/mattalkire/status/1489123175032143872 Simply put, Johnson checks so many boxes. He complements an exciting physical skill set in terms of size, length, power, and athleticism with technical refinement, football intelligence, and relentless effort. After making a statement at the Senior Bowl, the next test for Johnson comes at the NFL Scouting Combine where he can continue his climb up the board by validating the athleticism he displays on the field.  From Week 1 of the 2021 season where he collected 2.5 tackles for loss and 1.5 sacks against Notre Dame in his Florida State debut, to how he dominated all season long and most recently, wrecking offensive linemen at the Senior Bowl, Johnson has been one of the biggest risers in the class. Now it’s just a matter of how high he can climb. https://www.youtube.com/watch?v=owardRr0xLY