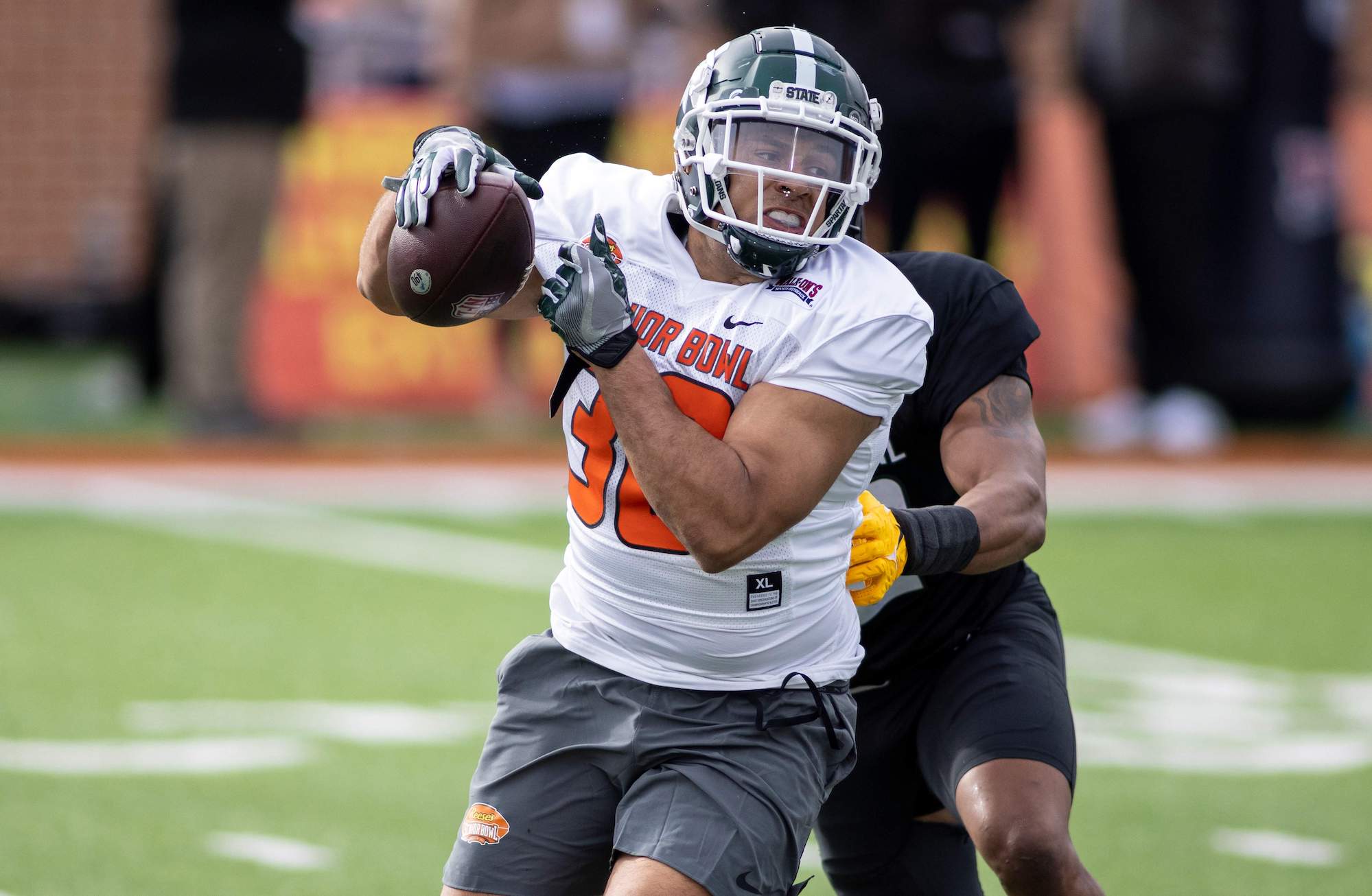 The NFL is constantly changing, yet staying the same in certain aspects. The 90s were ruled by the physicality of the ground game. Today, offenses prefer spacing and a pass-happy approach. Creating and exploiting mismatches is the name of the game. Possessing versatile and positionally flexible players is a great way to create those necessary mismatches. Defenses are embracing playing positionless football. We have seen some commitment on the offensive side of the ball as well. Here at the Senior Bowl, I noticed two players that fit this positionless/hybrid offensive brand of football: Michigan State’s Connor Heyward and Oklahoma’s Jeremiah Hall. Both players are thickly built and their skill sets offer flexibility and unpredictability. Heyward is 6-foot and 230 pounds. He has played running back and tight end for the Spartans offense. As a running back, he punished defenders with his physicality. His thick and compact frame provides a cushion to absorb contact. He has flashed athleticism at tight end as well. There were moments when he climbed the ladder and attacked the ball in flight. His strong hands give his quarterback confidence in the passing game. Throughout his five-year career at MSU, Heyward had 711 receiving yards on 96 receptions and six touchdowns in addition to his 825 rushing yards on 211 carries and five touchdowns on the ground. His versatility is what makes him an intriguing prospect. Another example of his athleticism comes from returning kickoffs—he has 38 returns for 723 yards. Heyward has surprising quickness and stop/start ability. His blocking skills were on display after changing positions to tight end. Ideally, a player with his abilities and size is labeled as a fullback instead of tight end. The former Spartan can play both positions well. Hall has a similar build as Heyward but is two inches taller and nearly 20 pounds heavier. Hall has played predominantly tight end. He is seen on tape in the backfield pre-snap for a few carries. Hall moves well for nearly 250 pounds. Despite his size, he can attack defenses downfield instead of only being an underneath option. He averages nearly 13 yards per catch for his career in Norman. With the flexible skill sets of both prospects, what do they offer offenses? Considering the split zone action is prevalent in the running game, both players have value. Whether as a fullback, tight end, or H-back, they can be impactful as the cross-formation blocker, attacking the unblocked backside end allowing the offensive tackles to quickly climb to the second-level defenders. In addition to leading backs between the tackles on iso or wham power run calls, these run-actions will open up the play-action passing concepts. This creates advantageous delayed route concepts off these plays. Pre-snap motion is a big asset in the league and both Heyward and Hall are movable players. You can line them in the backfield and motion into a tight end alignment, and vice versa. Heyward showcased his blocking ability during one-on-one pass pro drills this week in practice. https://twitter.com/DP_NFL/status/1489720562909949956 Hall also had great reps in those same drills. https://twitter.com/DiabeticTyler/status/1489047800012849155 These players are not sexy or polarizing by any means, but both have value to add to an offense—spread or power concepts, it does not matter. Heyward and Hall deserve more recognition and attention. H-backs and TE hybrids matter!