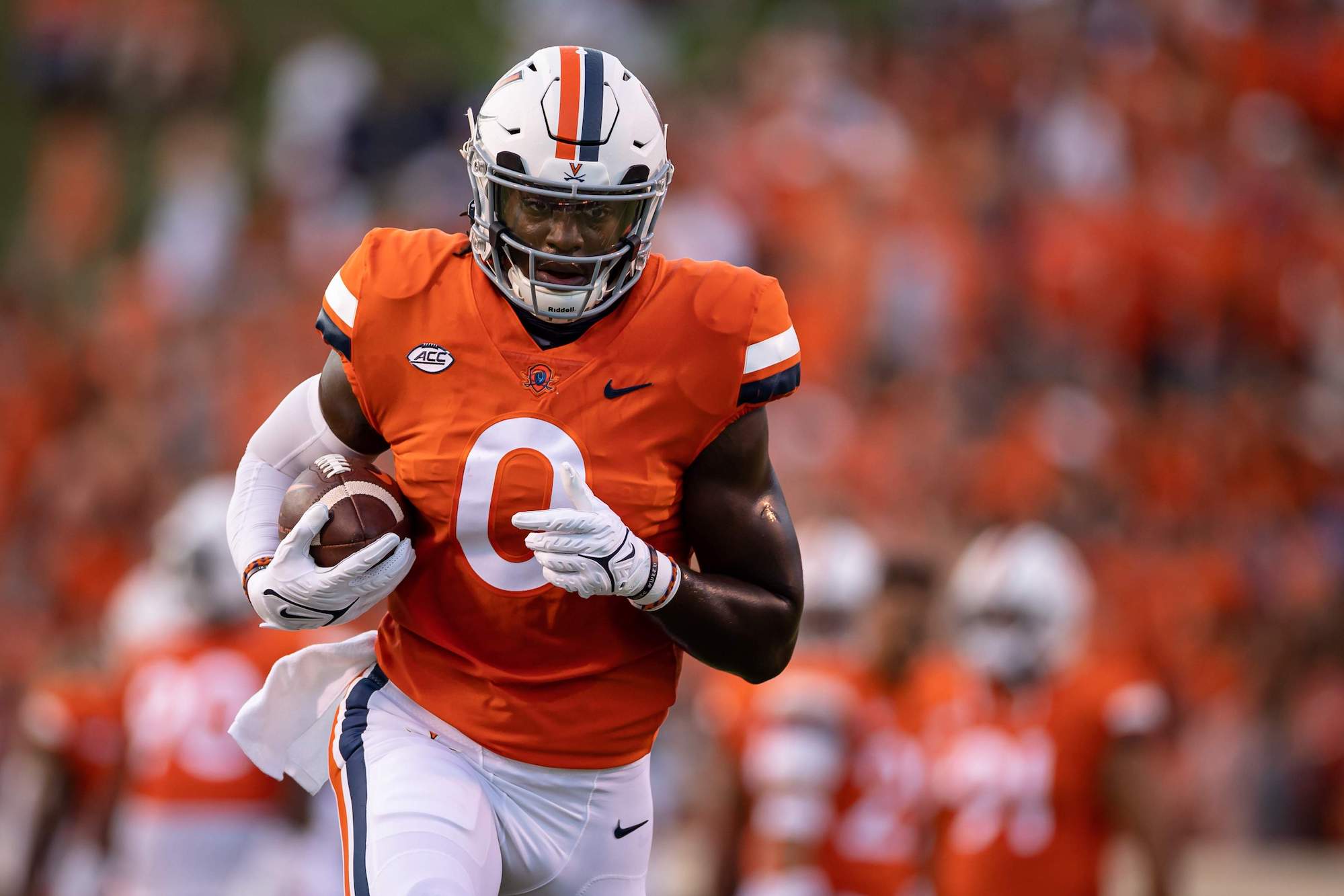 The quarterback to tight end transition is becoming more and more of a common occurrence in football. Whether it’s Logan Thomas and Tyree Jackson making the switch after failing to move the needle at quarterback in the NFL or Dawson Knox and Blake Bell transitioning in college, it has proven to be a smart move for a number of players. The next in line is Jelani Woods out of Virginia. A high school quarterback, Woods spent the beginning of his college career at Oklahoma State. Before the bowl game in his freshman season, Woods embraced a transition to tight end for the Cowboys. Woods spent the next three seasons at Oklahoma State developing as a tight end but was primarily used as a blocker. He hauled in just 31 receptions across those three seasons before transferring to Virginia. While Woods’ contributions as a blocker continued at Virginia, it was his ability to contribute as a receiving threat that brought him into the spotlight as an NFL prospect. His coming-out party came in the second game of the season against Illinois where he hauled in five receptions for 122 yards and a touchdown. https://www.youtube.com/watch?v=LXqyefeNREk The Illinois game sparked a streak of five consecutive contests where Woods caught a touchdown pass after catching just three from 2018-2020 at Oklahoma State. Woods finished the 2021 campaign with 44 receptions for 598 yards and eight touchdowns. Those eight touchdowns were the second-most among Power 5 tight ends in 2021 and tied the Virginia single-season record. Woods parlayed a strong final season into the opportunity to compete at the East-West Shrine Bowl and he is turning heads. Featuring a first-off-the-bus type frame, Woods checked in at a tick below 6-foot-7 and 259 pounds, Woods has 34⅛-inch arms and a wingspan of more than 82 inches. He has the type of body composition that gets scouts buzzing before even seeing him operate on the field. The good news for Woods is that he is using his dynamic physical skill set to make play after play in practice. Whether it’s one-on-one drills or in 11-on-11, Woods is coming down with catches. He knows how to make his big body and massive catch radius available for the quarterbacks and they love throwing him the football. Woods is rewarding those decisions by routinely catching the football and providing a mismatch in the middle of the field. https://twitter.com/Matty_KCSN/status/1487869000734314496 The clip above is a great example of what Woods is showing so far during Shrine Bowl practices and the impact he is capable of making at the next level. His size and ball skills put notable stress on the defense in the middle of the field and down the seam. The NFL is a matchup league and Woods presents his share of problems for opponents. It took some time for Woods to showcase his pass-catching prowess at the tight end position after transitioning from quarterback but it’s peaking at the right time. The arrow is pointing up for Woods in a deep and talented crop of tight ends.