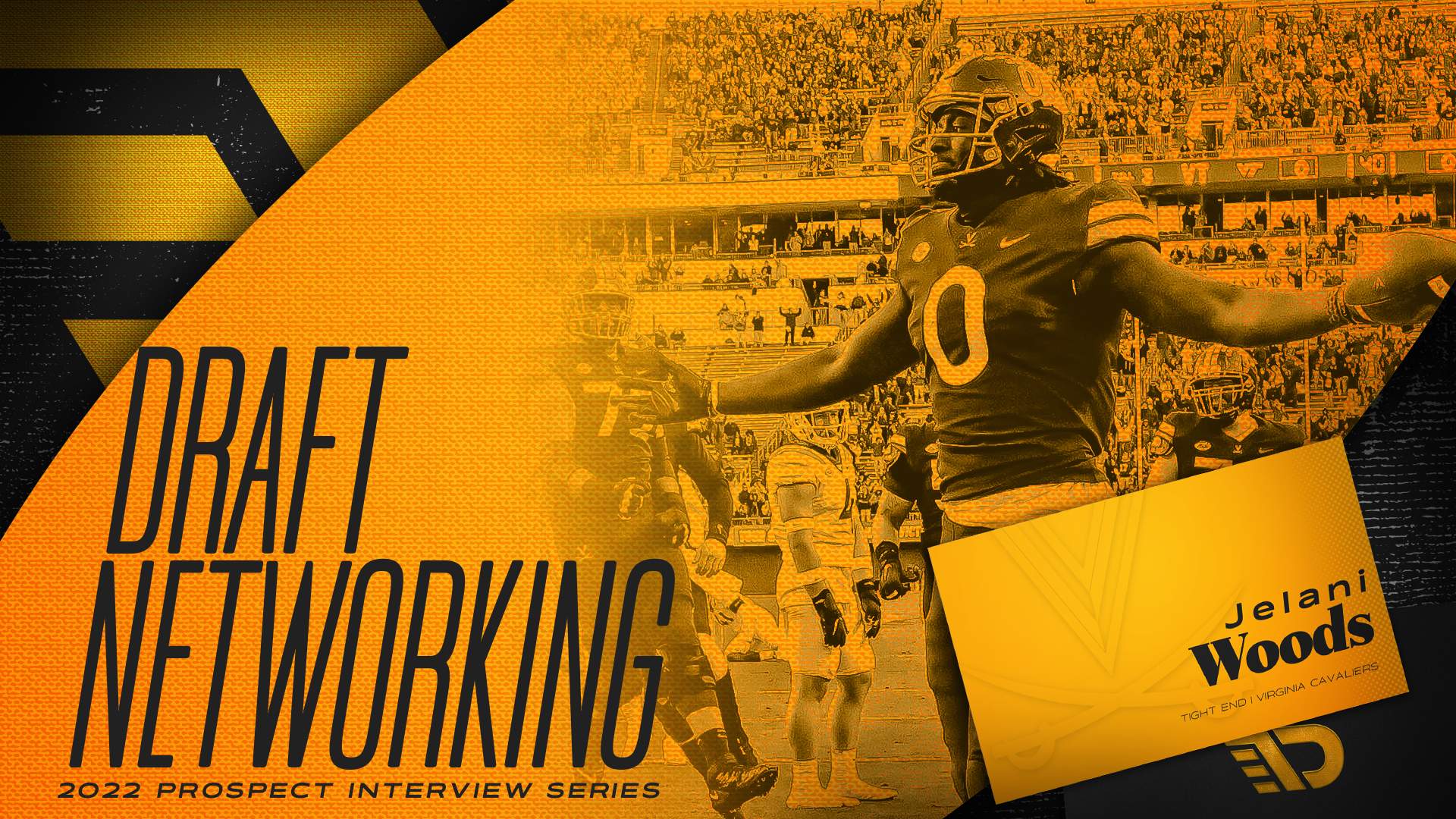 No tight end prospect has attached a jetpack to his stock throughout the 2022 NFL Draft process quite like Jelani Woods has. Woods’ first captured the attention of scouts at the East-West Shrine Bowl. While competing in the annual all-star event, Woods consistently looked a step above the competition. Woods was then electric at the NFL Scouting Combine.

The Ellenwood, Georgia native possesses create-a-player measurables at 6-foot-7 and 259 pounds with arms unfathomably longer than 34 inches, and a wingspan greater than 84 inches. When Woods hit the field for the actual testing portion, he blew the lid off Lucas Oil Stadium by blazing through the 40-yard dash in a staggering 4.61 seconds.

Woods recently spoke exclusively with The Draft Network regarding his decision to transfer to Virginia for his senior season, how the narrative on his pre-draft stock has dramatically changed, his incredible performance at the combine, how he uses his size to his advantage at the catch point, and so much more.

JM: After three seasons as a rotational player at Oklahoma State, you decided to transfer to Virginia for your senior campaign. You exploded for 44 receptions, 598 yards, and eight touchdowns in 11 games. It obviously paid off, but how do you reflect on the decision to transfer?

JW: I feel like it was pretty much one of the best decisions I’ve ever made for myself throughout the course of my life. I was a starter at Oklahoma State for a couple of years. I spent three years at Oklahoma State before I ended up transferring. It was a hard decision because Oklahoma State was a really good destination for me. I learned a lot under that coaching staff.

I enjoyed working with everybody there. I built strong relationships with the weight room coaching staff. I loved all of my position coaches. I got along with everybody in that community. I really loved my time there.

I eventually arrived at Virginia and built similar relationships with that coaching staff, and with everybody in that community as well. That was a really nice feeling for me. It’s definitely been an enjoyable journey for me.

JM: It’s been quite the journey. You were a decorated quarterback in high school. How did your previous experience at QB help you make the successful transition to tight end?

JW: It definitely helped slow down the game for me as I was making the transition. It allowed me an opportunity to really focus on the techniques within playing the tight end position. Outside of that, it was a relatively straightforward transition for me. I was more of a physical runner when I played quarterback. That helped me quickly acclimate to the physicality of playing tight end. I didn’t really find myself outside of my depth from that aspect of things.

JM: It sounds like having a background at quarterback really helped you. From early January to now, few prospects have improved their draft stock in the manner you have. Have you paid attention to how the narrative has changed on your stock throughout the process?

JW: I’ve definitely paid attention. Some of the things I’ve proven to NFL decision-makers throughout this process are exactly the things I set out to achieve at the beginning of the process. I wanted to showcase what kind of playmaker I am. I’m capable of doing pretty much everything you want your tight end to do. I’m a versatile guy. That’s how I approached the process way back when. That’s what I wanted to demonstrate to the coaches and scouts.

JM: You went to the NFL Scouting Combine and won big. That’s been a part of it. You measured in at 6-foot-7, 259 pounds with arms longer than 34 inches and a wingspan longer than 82 inches. You ran the 40-yard dash in 4.61 seconds, which is a blazing result all things considered. Do you feel like you surprised some people in Indianapolis?

JW: I definitely did. I definitely felt like I was riding that high. My dad always told me to never let anybody down, but most importantly, never let yourself down. That’s the overall motto I go through life with. I went into the combine with that chip on my shoulder. I was excited to show what I can do.

I had an injury throughout the season. I was dealing with a high-ankle sprain. That limited me for the majority of the season. Going through this process 100% healthy really allowed me to showcase some things that I couldn’t fully show on tape. I’ve shown my true abilities. This is what I feel like I can bring to the table at the next level.

JW: I would definitely say something up the middle. It’s hard to single something out, but I really love utilizing the middle of the field as much as I can.

JM: We consistently saw that on tape from you. What are some of the ways you attempt to create separation throughout a route?

I like to bang hats. I love getting active as a route-runner. I feel like I create most of my separation in that aspect. I can bang with guys. I can beat them with a little burst after I attack them. That’s part of how I create that separation.

JM: Given your size and overall frame, I’m curious if there are any current or former tight ends you enjoy studying. Do you model your game after anybody in particular?

JW: I’m an old-school cat. I love watching Antonio Gates, Tony Gonzalez, and other types like them. From more recent days, of course I enjoy guys like Marcedes Lewis, especially when he was in Jacksonville with the Jaguars. He’s always been a nice case study for me.

Of course with my size, I love watching Rob Gronkowski. He’s a great study for me. I don’t think Darren Waller gets enough credit. He’s an incredible player. I love Darren Waller. I study all three of those players.

JM: We need to give Darren Waller his flowers. I loved hearing some of those throwback names as well. We’ve talked a lot about your physicality. How do you use your size to your advantage at the catch point?

JW: You and I discussed my length. I have an extremely large catch radius. I’ve always tried to use that to my advantage. Being such a big guy, I like to use my body to shield guys away from the ball. I love playing physically. I can play through contact and stuff like that. Things like that definitely gives me an advantage over most defenders.

JM: You also do terrific work in the run game. It pops on tape. I think you possess the skill set necessary to play as an in-line blocker. You don’t find many tight ends who are polished as blockers at the collegiate level nowadays, but you’re an exception. What do you enjoy about that?

JW: I’m a physical guy like we said so I love to get after guys at the point of contact. I love to get into another guy while pretty much dominating him at the point of contact. That’s my motto going into every blocking rep. Of course I know I need more work in that area, though. I can become a better blocker at the next level than I am right now.

I’m excited to continue working on the techniques of blocking with an NFL position coach. I love the physical aspect of it. Being able to dominate somebody in the run game is a lot of fun for me, especially as an in-line blocker down in the trenches with those defensive ends and defensive tackles. I can get up on those safeties and cornerbacks as well.

JM: I love that. I feel like this conversation has highlighted why Jelani Woods has a chance to develop into the best tight end in the 2022 NFL Draft class. I’ve really appreciated your time today. What kind of impact is Jelani Woods going to make at the next level?

JW: I’m going to develop into a tight end that can be utilized on all three downs. I want to become a versatile, every-down tight end. I want to be able to do whatever the team needs me to do. That’s first and foremost. I believe I can bring those traits to the table from day one coming out of this draft class.