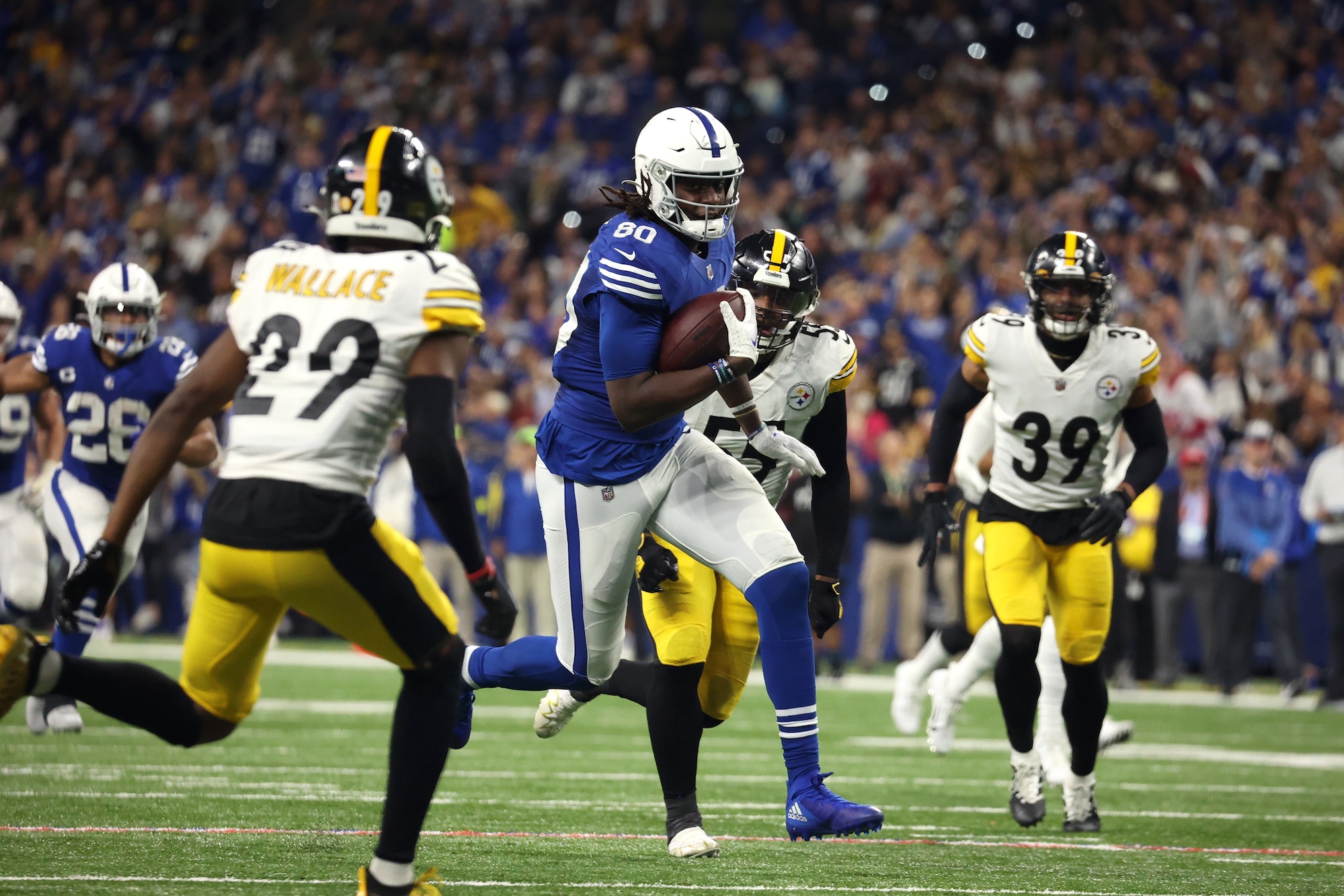 Woods’ standout contribution arrived via a 28-yard gain toward the conclusion of the third quarter. It was Woods’ second longest reception this season. The athletic and big-bodied playmaker created additional yardage post-catch. The drive ended with a Colts go-ahead touchdown.

Woods averaged a chain-moving 12.3 yards per reception. He totaled career-highs in both receptions and receiving yards. Woods also drew a pass interference penalty in the end zone. Pittsburgh’s overmatched defense had no answer for Woods’ talents and dominating frame.

The No. 73 overall selection in the 2022 NFL Draft, Woods played a career-high 41 snaps against the Steelers. Woods was present for 64% of Indianapolis’ offensive plays. Woods’ previous career-high involvement accounted for just 38% of plays in Week 6. It indicates Woods is gaining influence. Interim head coach Jeff Saturday and play-caller Parks Frazier are flashing increased trust in Woods’ abilities.

Woods’ raw numbers are particularly impressive. The Colts flashed a willingness to utilize Woods all over their formation. Woods played 23 snaps inline, 12 in the slot, and six lined up out wide, via Establish the Run. Woods ran 27 routes on 39 Matt Ryan dropbacks, which accounted for 69% of Ryan’s dropback attempts. Woods’ nine targets earned a hefty 26% target share.

Woods is averaging 3.3 yards after the catch per reception this season, via Pro Football Focus. Indianapolis’ quarterbacks have enjoyed a passer rating of 141.0 when targeting Woods. Woods should be seeing anywhere from 6-10 targets on a weekly basis moving forward. Woods has converted three of his 22 targets into touchdowns (13.6%). Woods’ massive frame must become a focal point of Indianapolis’ red zone approach.

Woods’ performance against the Steelers represented a monumental return for the former Virginia standout. Woods hadn’t played since suffering a shoulder injury in Week 9. He looked 100% healthy and engaged against the Steelers, and should manage to build on the momentum he captured.

Few players improved their draft stock throughout the pre-draft process like Woods did. Once viewed as a likely day-three selection, Woods’ showings at the East-West Shrine Game, NFL Scouting Combine, and Pro Day attached a jetpack to his reputation. Woods ran the 40-yard dash in a blazing 4.61 seconds and leaped a 37.5-inch vertical. Woods’ athletic profile landed him a rare 10.0 RAS score. It helped land Woods in the third round.

The 4-7-1 Colts are officially in evaluation mode as the regular season progresses. They should increase Woods’ snaps. Starting tight end Mo Alie-Cox is a limited and aging player. Sophomore tight end Kylen Granson also requires further evaluation, but it’s worth noting that Woods (6-7, 259) creates more mismatches for opposing defenses than Granson (6-2, 242) does. Woods possesses the highest ceiling among the bunch. The Colts should react accordingly.