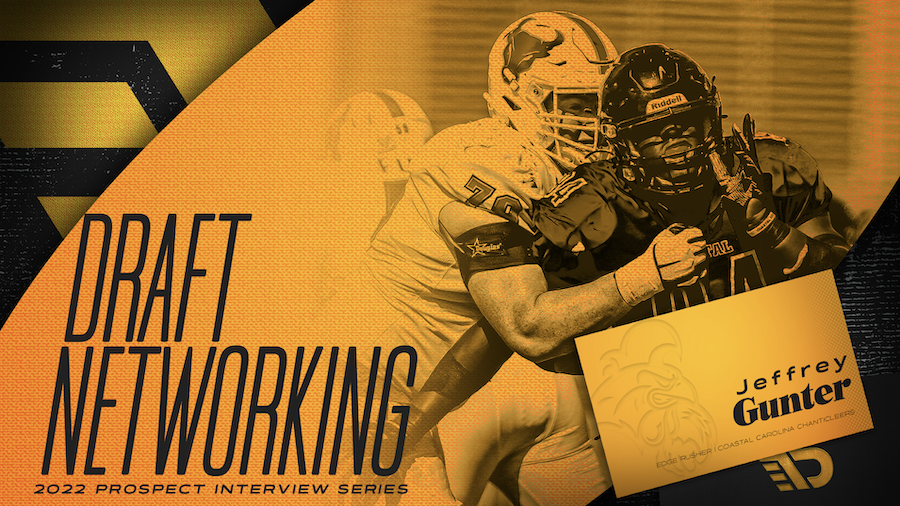 Applying pressure on the quarterback is the best way to slow down today’s high-powered NFL offenses. If teams are looking for an EDGE defender who is an exciting and ascending talent in the 2022 NFL Draft, they should have their eyes on Coastal Carolina’s Jeffrey Gunter. Gunter was named to the 2021 All-Sun Belt Second Team for his strong efforts.

Gunter recently spoke exclusively with The Draft Network about his NFL Scouting Combine experience, how he approaches his pass-rushing plan, which tools and go-to moves make up his arsenal, his ability to set the edge in the run game, and so much more.

JM: You recorded 17 sacks throughout an impressive four-year playing career at Coastal Carolina. How do you reflect on your time there?

JG: They really taught me everything I know. I feel like a lot of people don’t know I actually played defensive back until my junior year of high school. That’s where I played growing up. They really taught me how to play defensive end. I took it and ran with it. I had a great career at Coastal Carolina. I’m thankful for the opportunity.

JM: That’s quite the position change. What was that acclimation period like? What was the toughest part of making that switch?

JG: It’s a completely different world. I played the safety position specifically. That’s where I’ve spent the majority of my life. I went from being that eye in the sky to the trenches. It was hard at first. There’s a mental component involved. Once I got comfortable in the trenches, it fit me like a glove. I love coming off the edge, I love sacking quarterbacks. Mentally, I had become a more physical player. I have to be physical on every single play. That was the biggest thing for me. Once I made that change, it all worked out for the best.

JM: You consistently get after the quarterback on tape. What can you tell me about your pass rush arsenal? I’m looking for go-to moves, counters, and so on.

JG: My game is set up off my power. I’m a pretty strong kid. I’m explosive off the ball and things of that nature. I set up my long arm. I set up my bull rush. Once they start sitting down on those moves, that’s when I work my speed. It’s paid dividends for me.

JM: As a pass rusher, how can you mentally win a rep before the ball is snapped?

JG: That’s all about film study. Throughout the week, I’m looking for anything that can give me the upper hand. I try to identify little tells and keys. It’s the smallest thing sometimes. Maybe the center will flinch a muscle as a tell before snapping the ball. Maybe he’ll look around and move a certain part of his body when he’s pass-setting. Anything like that can help me get off the ball in a more efficient manner.

I pay attention to alignments, formations, down and distance, things of that nature. All of those things gave me the upper hand. My coaching staff at Coastal Carolina really taught me how to look for those things on tape. I’m thankful to them for that.

JM: You recently went to the NFL Scouting Combine and had a great week. You measured in at 6-foot-4 and 258 pounds with arms longer than 33 inches. You ran the 40-yard dash in 4.70 seconds. Your vertical jump (35.5 inches) and broad jump (122 inches) results were excellent as well. Do you feel like you surprised some people in Indianapolis?

JG: For people who didn’t know me, I’m sure my numbers somewhat surprised them. Anybody who knows me knew that I was going to test well. I was blessed to receive an opportunity to showcase what I’m capable of from an athletic standpoint. I went there and competed with the big boys. I proved that I’m athletic enough to become a good NFL player. That was my goal entering the week and I definitely achieved that. I proved it to everybody watching.

JM: I imagine you received some great feedback from teams on your combine results.

JG: I definitely have. And then a bunch of teams came to my Pro Day and were impressed with my movement skills. I was told I performed outstanding in that area. I showed that I can drop in coverage and that I’m proficient in that area. I’ve been told I might be one of the best defensive ends in this draft class when it comes to dropping in coverage. That was my goal. I wanted to show people that I’m versatile and that I can do everything. Everybody who watched my film came to my Pro Day and saw it in person.

JM: With you having a background at safety, I bet you feel pretty natural when dropping in coverage.

JG: Yeah I definitely do. I’m thrilled every time I get an opportunity to drop in coverage (laughs). Playing safety helped me out a lot in that area. Everything happens for a reason and works itself out. I’m happy I played safety growing up.

JM: You do a great job setting the edge in the run game. Tell me about the mentality it takes to set the edge as a run defender?

JG: To me, it takes a gladiator mentality. It’s me against that man and one of us has to win our matchup. When I was younger, I also participated in wrestling. I feel like that’s the type of mentality I bring with me when I’m playing against the run. I feel like one man shouldn’t be able to block me in the run game. As far as setting the edge goes, I’m just trying to make sure that I do my job. I have to dominate the man in front of me. I’m just trying to get to the ball at the end of the day.

JM: It pops on tape. For as productive as you’ve been during an excellent period in Coastal Carolina’s history, some people are still going to refer to you as a “small school” prospect throughout the process. How do you typically respond to that criticism?

JG: I couldn’t control who we played against. All I could do was dominate the competition I played against. And although it’s true that I went to a small school, we didn’t play Alabama every weekend or anything like that, I feel like my tape proves that I held my own against better competition.

When we played programs like BYU, I was just as productive as any other game throughout my career. I know that people will label me as a small school guy or whatever, but I think I’ve proven I can hang with the big boys on multiple occasions. I’m strong enough, athletic enough, and more than capable to do the same things those guys do.

JM: That’s the best way to handle that question. If you could hand-select the quarterback to be the victim of your first career sack, who would you choose and why?

JG: I have to go with the GOAT, man. Tom Brady. He’s one of my favorite players. He’s almost been in the league longer than I’ve been alive (laughs). To sack him would be an outstanding accomplishment and feeling. It’s a dream of mine. I used to play with him on Madden. I want him to be my first career sack.

JM: That’s a great choice (laughs). I’ve really appreciated your time today. What kind of impact is Jeffrey Gunter going to make at the next level?

JG: I have all the confidence in the world in myself. If somebody gives me an opportunity to learn and develop in their system, I feel like I can become one of the best players in the NFL. Give me five years and I promise you I’ll be up there with the Maxx Crosby’s of the world. I’m going to work my butt off to help a team win a Super Bowl. That’s my goal going into the league.