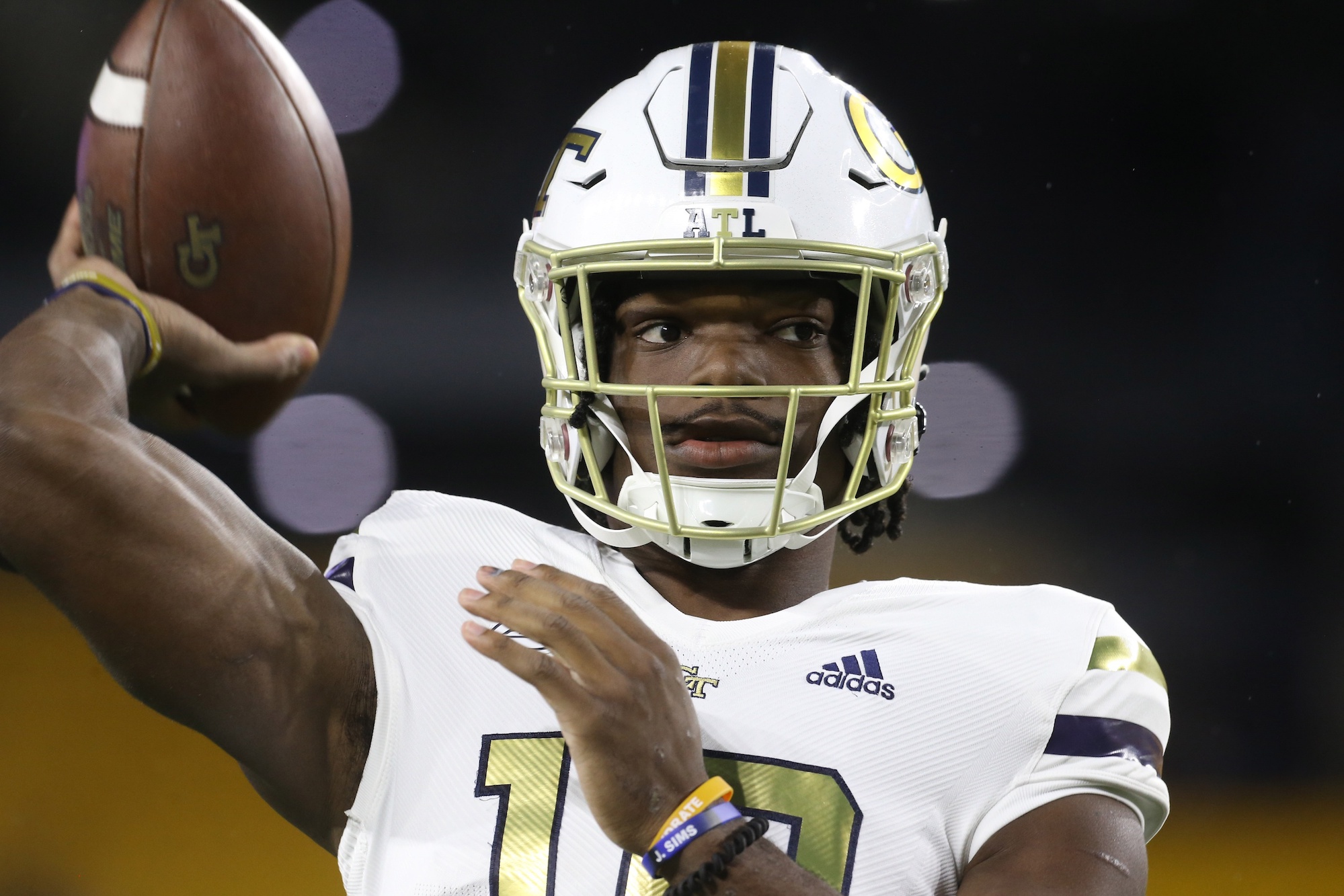 Jeff Sims Transfer Portal: What Are His 3 Best Landing Spots?

Georgia Tech quarterback Jeff Sims announced his intention to enter the transfer portal via his official social media pages. Sims arrived at Georgia Tech as a four-star recruit in 2020, but injuries and general inconsistencies derailed Sims’ tenure as a Yellow Jacket. Sims appeared in seven contests this season, throwing for 1,115 yards, five touchdowns, and three interceptions.

Sims actually entered the campaign as Georgia Tech’s starting quarterback. He suffered an injury against Duke and suffered another setback later in the season against Virginia. Little did we know that would be Sims’ final snap as a Yellow Jacket.

Tennessee should be Sims’ preferred landing spot. The Volunteers could be in the market for a quarterback this summer. Hendon Hooker is a fifth-year senior that is expected to enter the 2023 NFL Draft.
Hooker has exploded under the tutelage of offensive-minded head coach Josh Heupel. A former Virginia Tech product, Hooker has completed 69.6% of his passing attempts this season. He’s thrown for 3,135 yards and 27 touchdowns versus just two interceptions. An unfortunate torn ACL ended Hooker’s campaign prematurely, but the success he enjoyed attached a jetpack to his pre-draft stock. Collegiate quarterbacks searching for a change of scenery will take notice.

Heupel has proven capable of working alongside a transferring quarterback. After all, it was Heupel’s presence that partially attracted Hooker to Tennessee from Virginia Tech. Sims has likely paid close attention to Hooker’s ascension. A similar path could be attainable for Sims if he lands in Knoxville.

Malik Cunningham is a fifth-year senior. Cunningham has enjoyed a ton of success over the years, throwing for 70 total touchdowns and rushing for 3,179 yards and 50 additional scores. Cunningham will depart the Louisville program as a local legend, and the Cardinals may look to the transfer portal to replace him in 2023.

The Cardinals have a history of developing dual-threat quarterbacks. Lamar Jackson obviously comes to mind as a former first-round selection. Jackson is an elite franchise QB that honed his skills as a Cardinal.

There are worse places for Sims to consider. Louisville has a proven history of setting up dual-threat quarterbacks for both collegiate and professional success. Their head coaching situation looms large with Scott Satterfield potentially on the chopping block. Depending on how they decide to move forward, Sims may identify Louisville as a potential destination.

Oregon checks a lot of the same boxes Tennessee does. Quarterback Bo Nix has been outstanding this season. Nix is completing 71.7% of his passing attempts and has thrown for 27 touchdowns versus six interceptions. A dual-threat quarterback made in the same mold as Sims, Nix has rushed for 508 yards and scored a team-high 14 touchdowns.

Nix is a fourth-year senior that has already set career highs in every meaningful category despite coming to Oregon as a three-year starter at Auburn. In all honesty, Nix would be a legitimate Heisman hopeful if he didn’t play in the pacific time zone and within the underrated Pac-12 conference. The nation is sleeping on Nix’s current form and accomplishments.

First-year head coach Dan Lanning is doing an exceptional job. Lanning may be a defensive-minded leader, but Nix’s success as a first-year transfer is a resume-builder for Lanning’s future efforts to attract quarterbacks via the transfer portal. Jeff Sims to Oregon could make sense for all parties involved.