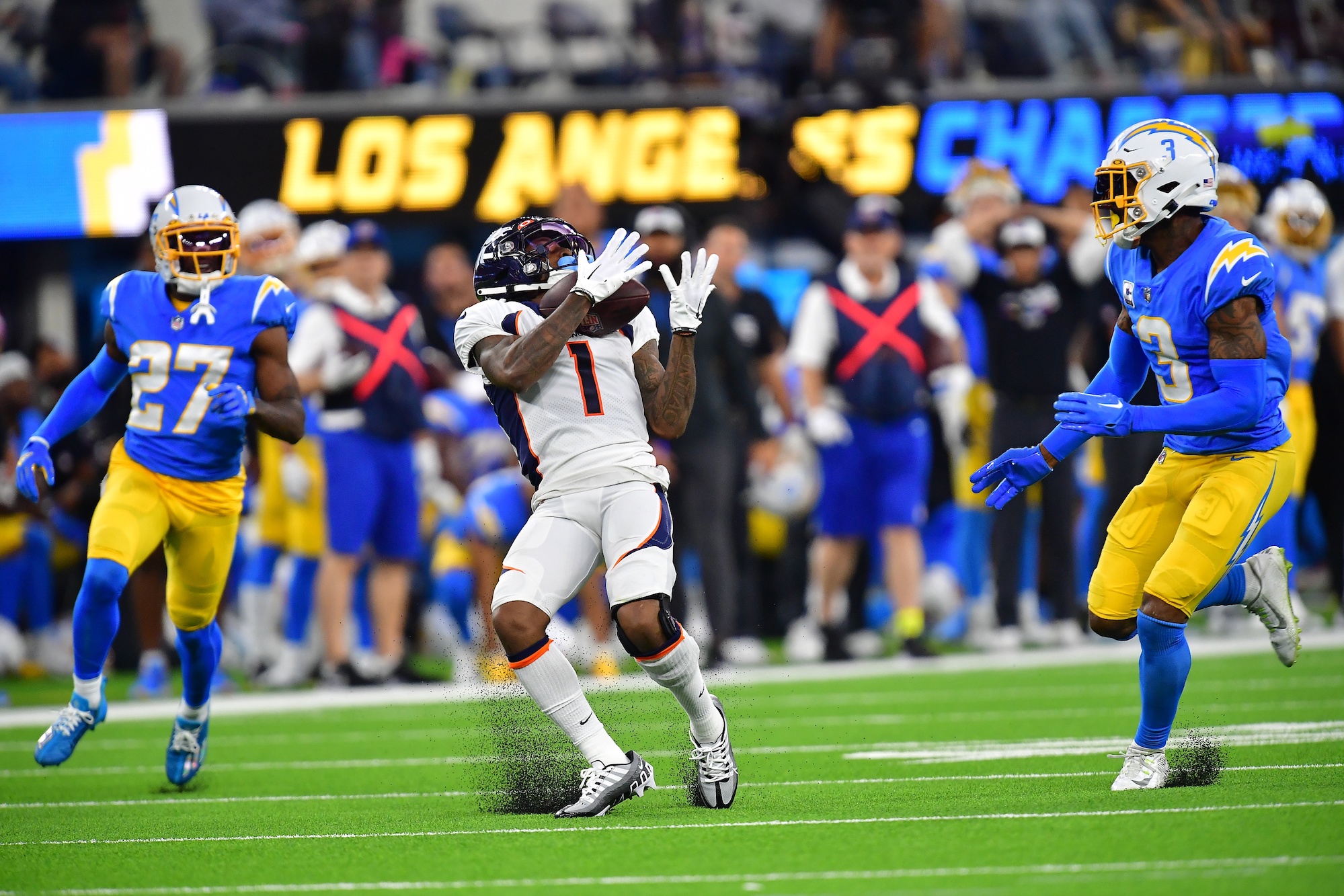 What Happened To JC Jackson?

The Los Angeles Chargers claimed an important victory over their division rival Denver Broncos on Thursday. The win improved the Chargers to an unconvincing 4-2 and tied them for first place alongside the Kansas City Chiefs in the AFC West (the Chiefs own the tiebreaker). Somewhat lost in the victory is the continued struggles of expensive cornerback JC Jackson. Jackson is a liability in coverage as things stand.

Chargers general manager Tom Telesco signed Jackson to a five-year contract worth $82.5 million that immediately made the former undrafted free agent out of Rutgers one of the highest-paid cornerbacks in the league. Jackson was added to improve a 27th-ranked scoring defense that allowed 27.0 points per contest in 2021. The results have instead been abysmal.

Jackson has allowed 17 receptions on 23 targets this season, per Pro Football Focus. Jackson has allowed multiple touchdowns and has yet to record his first interception as a Charger. Jackson has given up 19.5 yards per reception and opposing quarterbacks are enjoying a near-perfect passer rating of 155.3 when targeting Jackson in coverage. Jackson currently owns a pitiful PFF pass coverage grade of 28.9. He’s also been credited with three missed tackles. Jackson is currently unplayable in his current form. In fact, he was benched in favor of backup Michael Davis on Thursday.

Chargers head coach Brandon Staley was visibly displeased when faced with questions about Jackson’s performance during Thursday’s post-game presser. Staley confirmed that Jackson was at fault for allowing a 39-yard touchdown pass to Broncos rookie tight end Greg Dulcich in the first quarter. The Chargers were in Cover 3 and Russell Wilson found Dulcich streaking down the right sideline and into the end zone. Dulcich appeared to be virtually uncovered.

Staley also applied blame to Jackson for KJ Hamler’s 47-yard reception by confirming that Jackson didn’t have safety help on the play. Hamler got behind Jackson with ease and created several yards of separation between the two. Jackson was at the center of Denver’s two most explosive passing plays before being mercifully benched. Jackson was also called for defensive pass interference on a 3rd-and-long.

Jackson looks like a shell of the formerly dominant cornerback that excelled in both man and zone coverage in New England. Jackson was signed by the Chargers to take away opposing teams’ No. 1 receivers, particularly in a high-flying, pass-happy AFC West. Not only is Jackson falling well short of those expectations, but he’s also struggling against rookie tight ends and fourth-string slot receivers. The early-season fall from grace has been astounding.

Jackson’s ball skills have been non-existent. A defender that enjoyed a league-leading 23 passes defended last season while also securing 17 interceptions over the last two years appears to be a shell of his former self. The immediate payoff hasn’t arrived for the Chargers.

The Chargers have little choice but to allow Jackson to work through his current struggles. The hefty price tag attached to his name indicates Jackson won’t spend much time on the sidelines despite Thursday’s benching. It’s worth noting Jackson missed Los Angeles’ regular-season opener against the Las Vegas Raiders after undergoing ankle surgery in late August. The injury and surgery were described as a minor scope at the time. Could Jackson’s ankle injury be worse than first reported and the reason behind his shocking form? It’s worth monitoring as the season progresses.

The Chargers entered the campaign with legitimate postseason aspirations. Their current record (4-2) indicates they may be playoff bound, but the performances on both sides of the ball have left plenty to be desired. Telesco enjoyed an aggressive free agency period in an attempt to catapult the Chargers to Super Bowl contention. Jackson was supposed to be the prized possession of their free agent class, both in reputation and dollar value. It’s been a giant mistake so far. Will things turn around?