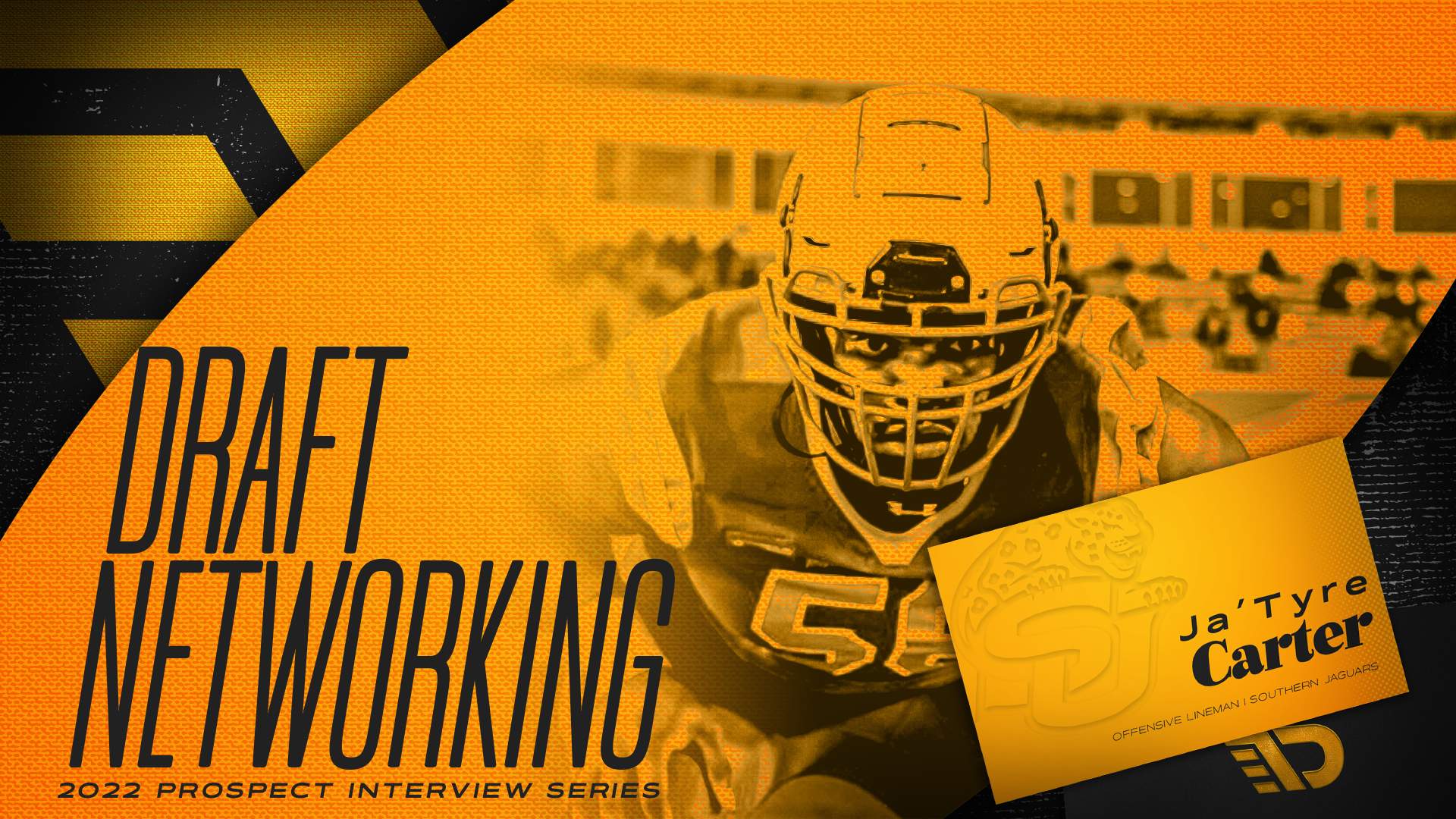 Southern’s Ja’Tyre Carter is one of the most intriguing mid-round offensive linemen available in the 2022 NFL Draft. Carter shocked dozens of scouts in attendance at his Pro Day by leaping an astounding 34.5 inches in the vertical jump despite weighing a healthy 312 pounds. Carter then further displayed his impressive athletic ability by running the 40-yard dash in 5.02 seconds. For teams searching for high-level athletes at the position, Carter fits the bill.

Carter recently spoke exclusively with The Draft Network regarding his excellent Pro Day workout and experience, which teams have shown interest in him throughout the pre-draft process, which position he sees himself playing at the next level, overcoming the “small school” stereotype, and so much more.

JM: You shocked a lot of people at your Pro Day by jumping a staggering 34.5 inch vertical despite weighing 312 pounds. You also ran the 40-yard dash in a hair over five seconds with dozens of scouts in attendance. Do you feel like you shocked NFL decision-makers with those workout results?

JTC: I probably shocked some people, but I would say most people in attendance knew what I was capable of from an athletic perspective. Some of them were surprised, but most of them weren’t.

JM: Why do you think some scouts were expecting those results? Expand on that for me.

JTC: I saw a lot of familiar faces in attendance. A lot of the scouts that were there, they used to attend my practices at Southern and what have you. They had already seen my athletic traits on full display previously. I know they were following me throughout the course of my career (laughs). They knew what I could do. A lot of the scouts that were seeing me in person for the first time at my Pro Day, I definitely shocked those people.

JM: That makes sense. Southern’s website had you previously listed at 275 pounds. I don’t know how accurate or outdated that is. Did you go through a transformation to tip the scales over 300 pounds for the pre-draft process? If so, it’s impressive to witness how you maintained your athletic ability despite putting on weight.

JTC: I was 275 pounds when I came out of high school. They probably put that number on my profile when I first arrived and never updated it (laughs). I did go through a gradual program to put on weight. I wanted to make sure that I didn’t put on too much weight too fast. I also didn’t want to be too small or under 300 pounds. I gradually put on the weight throughout my time at Southern.

JM: You handled that the right way. You made the most of your opportunity at the Senior Bowl back in January. You looked great while going up against some of the best defensive linemen in the country. What do you think that did for your draft stock?

JTC: I went out there and answered a bunch of questions scouts, coaches, and general managers had on me. I know the league wanted to see if I could handle going against top competition. I went out there and held my own. I was very competitive. I had a bunch of fun out there, I soaked up the moment, but I was very competitive at the end of the day. I definitely answered a lot of questions out there. I proved that I could compete with the best of the best. I passed that test with flying colors. I did even better than I thought I would (laughs).

JM: You were terrific in Mobile. Have you made any Top 30 visits or had any virtual meetings throughout the process, and do you have any more coming up?

JTC: I have a workout with the Atlanta Falcons on April 15. I have a virtual meeting with the Los Angeles Chargers coming up. That’s what is on my schedule currently.

JM: You’re a versatile guy. What position do NFL teams see you playing at the next level?

JM: What’s the difference between playing guard and tackle?

JTC: You have more time and space at the tackle position, but it’s worth mentioning those EDGE defenders are of the speedier variety. There’s almost no time and space while playing guard. Everything happens in the trenches so quickly. The initial point of contact occurs as soon as the ball is snapped. It’s a lot different.

JM: That’s a good point. You’ve impressed throughout this time, but some will still refer to you as a “small-school” prospect. How do you typically respond to that label?

JTC: I don’t really think about it. People will always have an opinion. I just take things as they come. I don’t really listen to the outside noise. I don’t let it bother me. I just keep playing football at the end of the day. I know scouts were thrilled with my performance at my Pro Day, and they were thrilled with the Senior Bowl as well. I’ll continue showing everybody what small school guys can do.

JM: That’s the best way to handle that question. I’ve really appreciated your time today. Why should an NFL team use one of their draft picks on Ja’Tyre Carter?