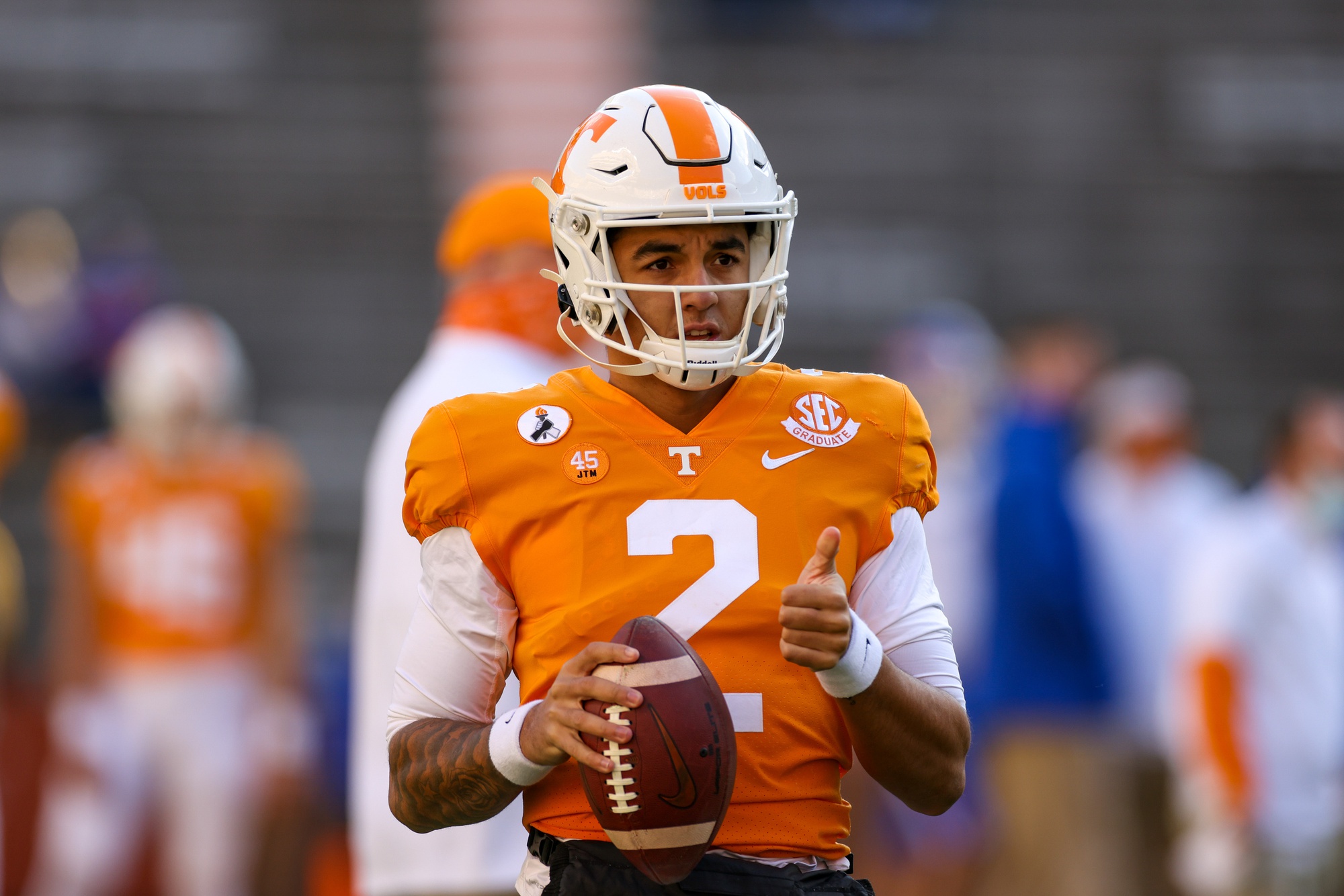 When the 2022 NFL Scouting Combine invites list was released, there were a number of names that were surprising because they were either included or left off. Former Tennessee quarterback Jarrett Guarantano falls into the latter category despite having some success in the SEC against some of the best competition in the country over the course of a lengthy career.

Guarantano spent his first four seasons at Tennessee, with sky-high expectations surrounding him from the moment he committed to the Volunteers as one of the top recruits in the nation, before ultimately transferring to Washington State for the 2021 season. The poised pocket passer remembers his time at both Rocky Top and Wazzu as being filled with ups and downs but doesn’t have any regrets about his journey or the way it’s played out.

Guarantano got off to a solid start at Washington State. He was named the starter and the team captain and was ready to put together a standout season with a change of scenery. But it was short-lived as he was forced to exit the season-opener against Utah State with a left knee injury as the action had hardly gotten underway.

It was something that would stick with him and ultimately hinder him from ever getting an actual chance to showcase himself that season.

“At Washington State, I thought it was going to be a killer year and then in the first game of the year in the second quarter, I get hurt and then I wind up missing a long time due to that,” Guarantano said. “Going through these things has allowed me to show my true colors and to learn a lot more about myself as I prepare for the NFL…It was a very long, very tough recovery. It took me between seven and eight weeks to really truly recover. I was never really able to come back and play, and I re-injured it again in the Utah game a few weeks later. It was really difficult to be able to come back and play with all of that.”

Guarantano ended up seeing the field for just those two games last season, meaning that it has now been well over a year since we have seen him play a college football game at full capacity. Adversity from quite literally every aspect, whether that be physical or mental, is something Guarantano is no stranger to, though. He played just about every offense known to man between Tennessee and Wazzu and had to deal with coaches getting fired in both places he went.

One product of all of these shifts though in an unshakeable mentality, the ability to transition quickly, and an exceptionally high football IQ as his responsibilities at the line of scrimmage essentially shifted every year in a scheme that never totally resembled the one before it.

“Having five different coordinators, every year was a different story,” Guarantano said. “My freshman year, I didn’t really do too much at the line of scrimmage. My sophomore year, I did pretty much everything. My junior year, I did a very, very good amount. And then my senior year, not so much, and then I go to Wazzu and run the run-and-shoot, which is a bit different from all of that. I’ve run the hurry-up offense, the West Coast, 22 personnel i-formation type of offense, and every single one of those has different rules on what the quarterback is asked to do at the line of scrimmage.”

Guarantano knows the reality of the situation, that even though he’s made strides and has seen a decent amount of success given the tough circumstances he’s been dealt that have affected the entirety of his college career, a lot of people haven’t been able to see his improvement given how long it has been since he suited up as a full-time starter.

“It’s been a little while (since I’ve played a college football game) and I think I’ve progressed significantly within this last year and a half really. Working with Jordan (Palmer) has improved a lot of things from a mental and physical aspect,” Guarantano said. “We’ve worked on a lot of things with my accuracy, we’ve worked on a lot of downfield things, just as a player overall I think I’ve really progressed. Unfortunately, I haven’t really been able to show that. Looking back at my career as a whole, I think there are a lot of good games in there and a lot of games I would like to have back. That’s just the game of football. But I’m confident I’m throwing the best I’ve ever thrown right now going into my NFL career.”

Despite the fact he hasn’t always popped on the stats sheet, something that also has to do with the transition as a whole and how different offenses work, and the fact he hasn’t had all of the same opportunities some other quarterbacks had to get in front of scouts ahead of the draft, Guarantano likes where he’s at.

And so does Palmer.

“I think velocity and accuracy and movement are areas he’s improved the most in. Everything we do is from the ground up so I think he’s moving better and therefore he’s got more energy on the ball and the accuracy comes in draft prep in my experience because they’re not doing anything else for 2 ½ months,” Palmer said. “They’re focusing on their throwing motion, all the things they need to learn. When they’re in college, they have school, homework, teammates, an offense, a lot of stuff going on. When they get to the league, they have money, they have marketing stuff, they have trips. So the draft training is really the only three-month period in their entire career where they can just focus on themselves and that presents the greatest opportunity to take a step in their career. He’s taken advantage of that as much as anyone.”

Guarantano hasn’t let the low points of his career derail him despite everything that can go south essentially doing just that, and it’s something to be appreciated.

“His journey is super unique. I’ve actually been wanting to work with him for three years and I’ve known him since he was in high school,” Palmer said. “I’ve really watched closely these last few years unfold for him. I think I see something in him that, since he wasn’t invited to the combine, apparently other people don’t see. He’s just had a really weird career and it’s something I’ve seen before – I saw it with Kyle Allen, I’ve seen it with a number of guys where kind of everything that could have gone wrong did go wrong. He’s really mature and really experienced as a player. I think he’s a fascinating story and it’s a bummer he didn’t get to throw at the combine because he probably would have been top three in all testing categories.”

In the midst of what might be one of the most wide-open draft classes at quarterback in recent history, Guarantano brings a good foundation for an NFL team to build off of and could be a hidden gem if people would take the time to give him a true chance.

“He’s all the physical measurables that you would want. He’s about 6-foot-4, probably runs a low 4.6, he’s really accurate and he’s got a strong arm,” Palmer said. “ I would say he’s got one of the top couple arms in this entire draft class and I understand how strong that statement is. He’s training every day with Carson Strong and Desmond Ridder so I think that’s a really good reference point. He’s one of the biggest secrets of this draft.”