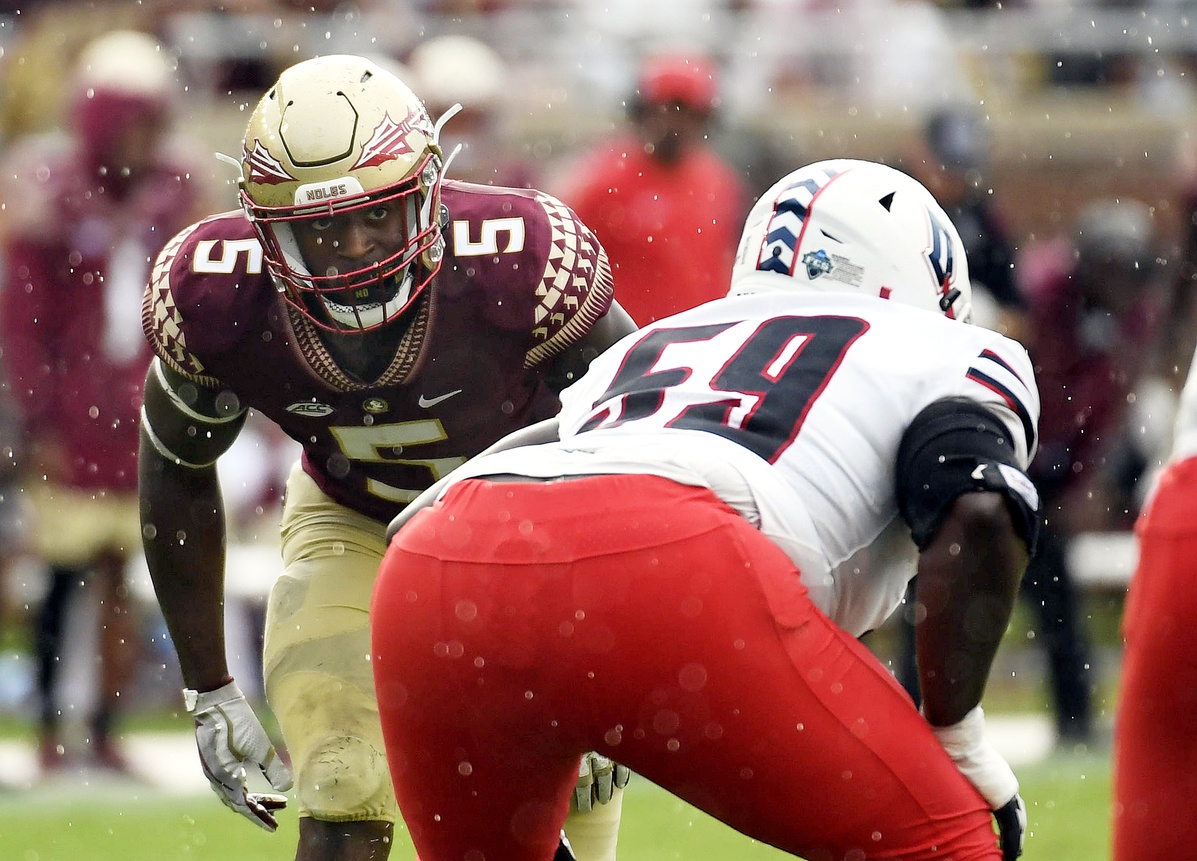 Florida State EDGE Jared Verse has exploded in recent weeks. A Dayton, Ohio native, Verse has recorded 2.5 sacks in Florida State’s last three contests, bringing his yearly total to 6.5 quarterback takedowns. Verse is currently establishing himself as one of the nation’s most feared sack artists.

Verse’s latest sack occurred against Syracuse in FSU’s dominant 38-3 victory over the Orange. Verse showcased excellent hands to defeat the offensive tackle’s outside shoulder. Verse won the edge and promptly brought Syracuse’s quarterback to the ground.

Jared Verse with the sack for #FSU. pic.twitter.com/8JRzVHtViu

The No. 44 overall player in October’s TDN100 update and our sixth-highest-ranked pass rusher,  in-house scout Brentley Weismann sent Verse to the Dallas Cowboys in our latest NFL mock draft. Verse would form quite the pass-rushing trio alongside Micah Parsons and DeMarcus Lawrence.

Verse is in red-hot form. He’s on quite the streak, recording at least 0.5 sacks in three consecutive contests. Verse recorded a sack and recovered two fumbles in Florida State’s 45-3 rivalry victory over Miami in early November. Verse showcased a relentless motor and advanced hand combat en route to sacking Miami quarterback Jacurri Brown. Verse proceeded to break the “U” over his leg in celebration. The swagger is impeccable.

Jared Verse with the sack then he breaks the U over his knee. #FSU pic.twitter.com/AUE9NdvtXt

Verse announced himself with a two-sack performance against LSU in FSU’s 2022 regular-season opener. Verse hasn’t looked back since as he continues to torment opposing backfields on a week-by-week basis. Verse firmly finds himself in the first-round conversation as NFL general managers continue their pursuit of elite sack artists.

#FloridaState Edge Jared Verse #5 terrorized the LSU backfield all night. Officially had 2.0 sacks but his impact was greater than that.

The Albany transfer is quickly establishing himself as one of the most disruptive pass rushers in CFB. pic.twitter.com/L1kRBmkZwm

A former undersized high school tight end with zero FBS scholarship offers, Verse is currently proving himself at the highest level imaginable. Verse’s form as a Seminole is crucial to his pre-draft stock following his decision to transfer to Florida State from Albany. Verse accumulated elite statistics at the FCS level, compiling 74 total tackles, 21.5 tackles for loss, and 14.5 sacks across two seasons at Albany. In 2021, Verse earned First-Team All-Conference selection and FCS Freshman All-American honors after registering 53 tackles, 11.5 for loss with 10.5 sacks and 13 quarterback hurries.

There’s a notable difference between producing at Albany and Florida State, however. Verse is currently passing the “step up in competition” test by flying colors. NFL decision-makers will note Verse’s ability to immediately hit the ground running on a bigger stage.

Verse possesses the first-step explosiveness necessary to defeat offensive tackles with the desired consistency. Verse uses quickness to shoot gaps. His motor as a backside defender pops as Verses chases down ball carriers as an unblocked defender. Verse’s rare athleticism often gives him the upper hand.

Verse is a speed demon that previously ran track for the Central Columbia Blue Jays. Verse won the state championship as part of his high school’s 4×400 relay team. Those abilities have translated to the gridiron where offensive tackles struggle to match Verse stride for stride.

Verse has revealed himself as one of college football’s most heartwarming stories of the 2022 campaign. NFL defenses are combating today’s pass-happy offenses by rostering athletic difference-makers up front. Jared Verse is currently proving that he possesses that type of potential.