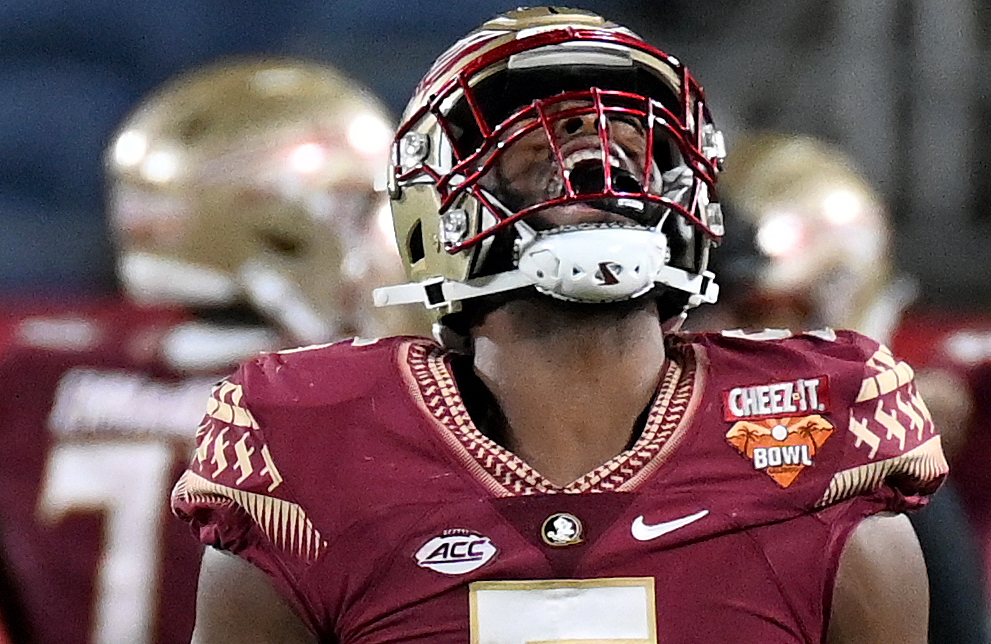 It was just last year that the draft community fell in love with a dynamic, toolsy edge rusher that called Tallahassee home. A program known for its constant production of NFL talent, EDGE Jared Verse could be this year’s version of Jermaine Johnson.

Just one year removed from an uber-successful tandem of seasons at the University of Albany, Verse’s blend of power and explosiveness has taken over the draft scene this fall. An edge threat that checks all the measurable and intangible boxes you look for in a premier sack artist on Sundays, his stock has entered fifth gear as the pre-draft process kicks into full speed.

With 36 pressures and nine sacks, his performances against top competition this fall have made it easy on the industry when attempting to lay a finger on just how impactful Verse could be from day one of his rookie campaign. A 5-tech that has no issue sliding out a little further and rushing from outside the shoulder of the tight end (wide-nine), his approach to each snap flashes abundantly on tape.

Similar to a hitter in baseball where an approach is necessary during an at-bat, while some young edge rushers rely solely on athleticism to try and work by opposing tackles—which is often met with stout hands—Verse is a mature presence on the outside who has a counter for the counters of offensive linemen—a trait beyond his years. An excellent run defender as well, while he isn’t the first guy to jump off the line of scrimmage, his patience in the RPO game was textbook in how to defend as an edge rusher at times this year. Quick yet subtle when asked to get square at the line of scrimmage and force a decision from the ball-carrier, his chase-down speed and length make up for any lost time he may suffer from due to any second-guessing up front.

An extremely cerebral player, you’ll rarely see him chasing a play after being out of position or simply not understanding an offensive concept. Football IQ is something teams won’t have to worry about with Verse despite his limited amount of snaps against high-level competition. While Verse remains a ball of clay as a young prospect, more snaps will only see him reach a performance ceiling as lofty as any pass-rusher in the class.

OU player: “You’re not making to the league”

A confident athlete that potentially ended his Seminole career with sacks in five of his last six games played, Jared Verse remains one of the more intriguing case studies in the 2023 class. While some will wish he had more snaps under his belt at a high-DI level or had a game (or two) where he looked unblockable, the pathway for Verse to become an immediate impact defender from the moment he steps onto NFL turf is there. Development remains the name of the game, and fine-tuning the next high-octane pass rusher out of Mike Norvell’s program should present a plentiful helping of production for one fortunate team.