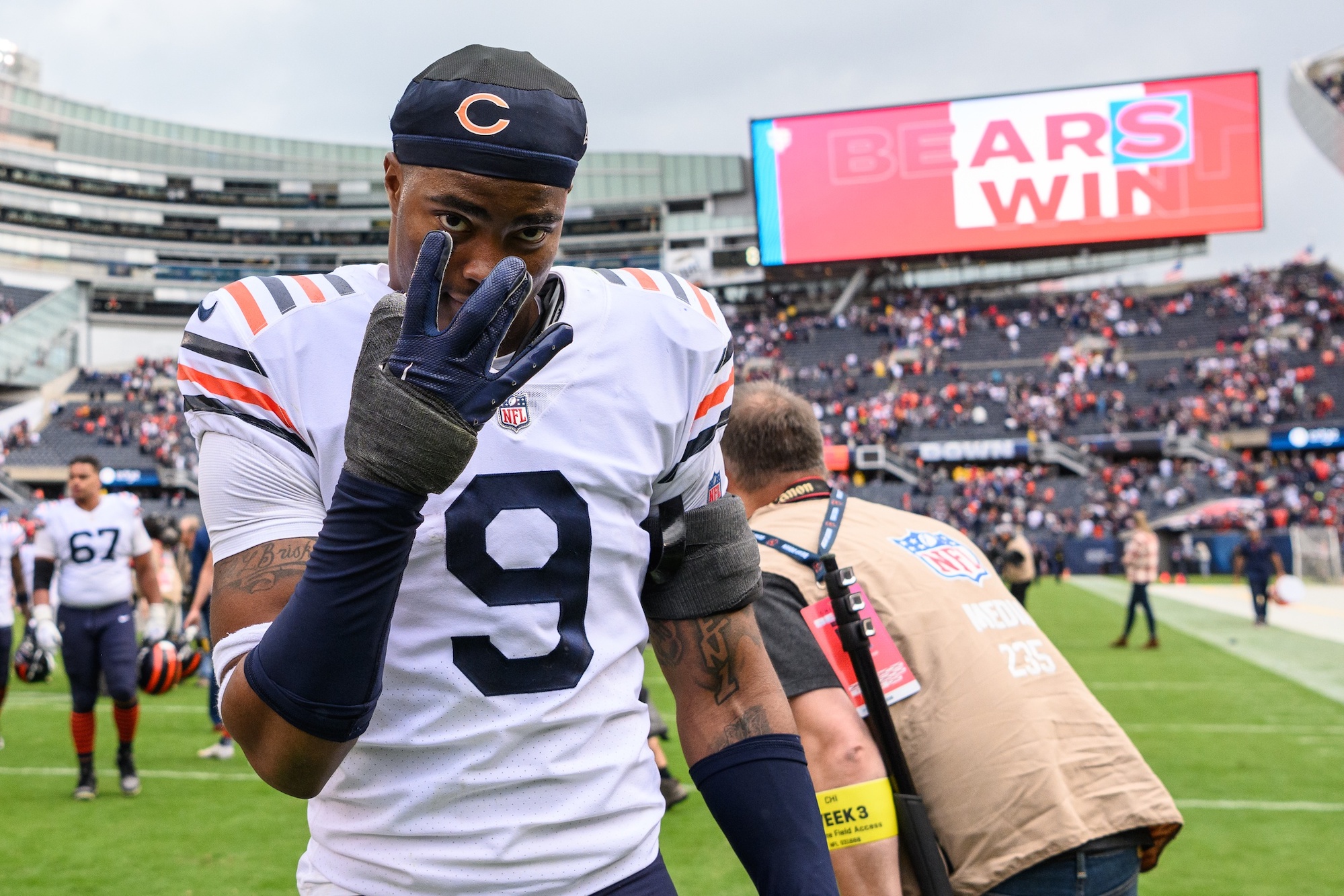 Chicago Bears rookie safety Jaquan Brisker has been a menace as the jack-of-all-trades kind of defender his team hoped he’d be when they drafted him in the second round.

Brisker is exactly the kind of player the Bears need as a foundational piece in their rebuild. He’s a very talented and versatile defensive player that has the skills and potential to grow into one of the league’s best safeties. For a team that traded away one of their veteran defenders—edge rusher Khalil Mack—and lost another—defensive lineman Akiem Hicks—in free agency this offseason, having a young player like Brisker step up and be successful is crucial to their current and future success.

All eyes in Chicago were on Brisker from the moment he was drafted. It wasn’t because he wasn’t a promising prospect or that he was a reach, it was because of what the Bears were passing on when they decided to draft a safety. Rather than address the Bears’ need at receiver with either of their second-round picks, general manager Ryan Poles opted to take the safety out of Penn State nine picks after taking another defensive back, cornerback Kyler Gordon. Bears fans and members of the media were quick to question Poles’ decision to pass on someone like receiver George Pickens. Early on, Brisker had to step up and prove Poles made the right move.

Surprising no one who had watched Brisker’s college tape—and perhaps Poles and the Bears’ coaching staff least of all—he immediately made an impact out of the gate. He made plays all of training camp and in preseason games, turning heads and forcing himself into the starting safety role in case there had been any doubt. That playmaking ability has extended into the regular season; Brisker has been quick to make a name for himself with the way he’s balled out in these first six weeks.

Though he’s yet to record an interception or an official pass breakup, Brisker has allowed just five completions on 16 passes—or 31.3%—and opposing quarterbacks have a 40.9 passer rating when targeting him in coverage. He’s only allowed 49 yards to opposing receivers and has yet to give up a touchdown. It’s only been a few weeks, but quarterbacks are already learning they have to respect the rookie safety. The ball production will come eventually, but he’s been locking down receivers all year so far.

It’s not only in pass coverage that Brisker has excelled. He also has been a total menace in Chicago’s pass-rush attack. Through the first six weeks of the season, the rookie safety is tied for the Bears’ team lead in sacks with two. He’s also second on the team with his three tackles for a loss so far this year.

Brisker’s first sack came against the Giants in Week 4. Blitzing as an unblocked defender, he had to slow down, but not stop completely, by chopping his feet when he saw the play-action fake. Once Brisker saw that quarterback Daniel Jones still had the ball as he rolled out, the safety charged Jones—who is a fairly mobile quarterback—wrapping him up and bringing him down for a 13-yard loss.

The rookie’s second sack happened last Thursday against another NFC East opponent, the Commanders. Once again, Brisker was left unblocked, charging upfield with full steam right for quarterback Carson Wentz. This time, there was no play-action, and he got to Wentz in a hurry before easily wrapping him up and bringing him down for his second career sack.

The rookie @JaquanBrisker getting to the QB in a HURRY 😮#WASvsCHI on Prime Video
Also available on NFL+ https://t.co/0NxrLlxiBS pic.twitter.com/NmtdnGrBFT

The explosiveness that Brisker has makes him very dangerous in coverage, as a run defender, and as a pass rusher. It’s very hard to target a guy who can break on the ball or an open receiver so quickly, and when he’s on the line of scrimmage, his presence alone can create pressure on opposing offensive lines, who know he’s just as capable of blitzing the quarterback from there as he is dropping back in coverage. If they prepare to block Brisker and he drops back, another unexpected pass rusher could break through to the quarterback. If they prepare as if Brisker will drop in coverage, he might get home to the quarterback untouched.

Brisker is such a special player and exactly what the Bears need as they rebuild their roster. He’s been on the field for every single defensive snap they’ve had this year and has been making plays all over it through these first six weeks. It won’t be long before he establishes himself as a true cornerstone of Chicago’s defense… if he hasn’t already.