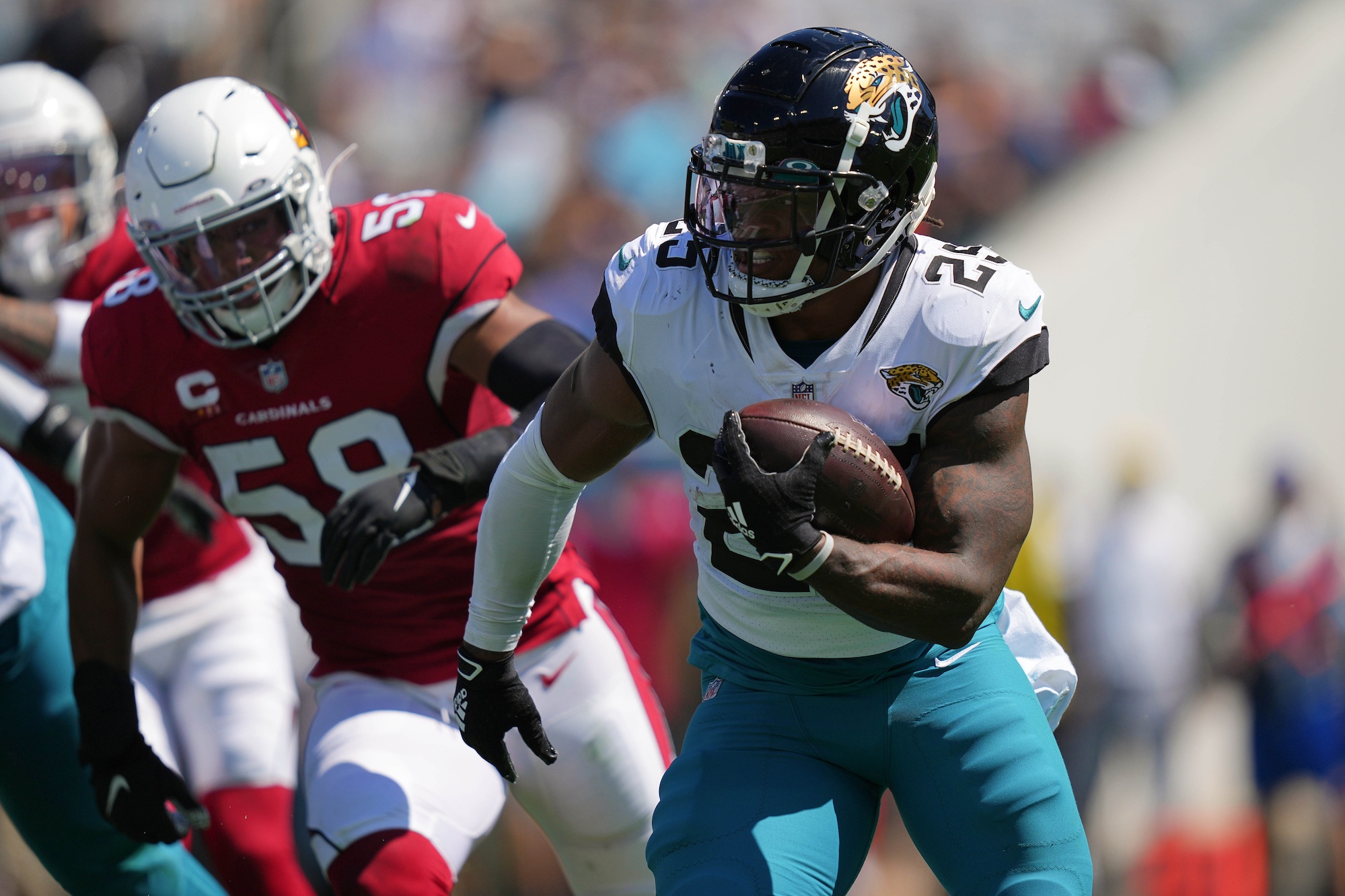 James Robinson Could Be Primed For Bigger Role Than We Thought

Jacksonville Jaguars running back James Robinson avoided starting training camp on the Physically Unable to Perform (PUP) list, per Jaguars Head Coach Doug Pederson. It represents excellent news for Robinson, who suffered a season-ending torn Achilles injury in Week 16 of the 2021 season. Beginning camp with little limitations indicates Robinson is on a miraculous path to a speedy recovery and leans favorably to him playing in Week 1. It suggests we shouldn’t forget about Robinson, who could be Jacksonville’s starting running back once again in 2022.
A former undrafted free agent out of Illinois State, Robinson exploded onto the scene by recording 1,070 rushing yards as a rookie. Robinson averaged a healthy 4.5 yards per carry and scored seven rushing touchdowns in 2020. A dual-threat playmaker, Robinson added an additional 344 receiving yards and three touchdowns. The 2021 campaign saw Robinson fail to gel with a new coaching staff led by the controversial Urban Meyer, but Robinson still totaled 989 total yards of offense in 14 appearances before suffering the injury.  A fresh start under a staff that’s better prepared to usher the Jaguars forward is good news for Robinson. A clean bill of health never hurts, either.

Robinson is expected to play alongside Travis Etienne, who missed his entire rookie campaign due to a significant tear in the lisfranc zone of his foot. A healthy Robinson should have little issue claiming the traditional role in Jacksonville’s backfield while Etienne handles passing-down duty. Earlier this offseason, Etienne spent portions of the Jaguars’ organized team activities (OTAs) catching passes throughout practice. Etienne had sessions that saw him solely focus on catching the football. That, paired with a healthy Robinson, tends to indicate this backfield is headed for more of a timeshare than originally predicted, with Robinson slightly outproducing (and out-touching) Etienne.

Meyer was criticized for utilizing Etienne in wide receiver looks throughout the majority of last year’s training camp. It sounds like Pederson and offensive coordinator Press Taylor similarly view Etienne as a pass-catching threat. Robinson’s return would allow the Jaguars to split up their backfield accordingly.

A new regime makes it difficult to say with certainty how the Jaguars’ new staff views Robinson and Etienne, but all signs point to the aforementioned timeshare. Pederson enjoyed success as the head coach of the Philadelphia Eagles, claiming an unlikely victory over the New England Patriots in Super Bowl LII. Three running backs rushed for more than 300 yards for the Eagles that season (LeGarrette Blount 766, Jay Ajayi 408, and Corey Clement 321). A successful stint as Andy Reid’s offensive coordinator in Kansas City also showcased Peterson’s preference to field a timeshare in the backfield—he learned from Reid, after all.

Much of the offseason focus in Jacksonville has centered around upgrading their pass-catching options, making Robinson and the running game an underappreciated commodity. Jaguars General Manager Trent Baalke has made sizable investments at wide receiver and tight end, adding the likes of Christian Kirk, Evan Engram, and Zay Jones to the fray. An effective rushing attack is still a young quarterback’s best friend, and the Jaguars will lean on Robinson and Etienne to remove some of the pressure off sophomore quarterback Trevor Lawrence’s shoulders.

Robinson is getting healthier and a mid-August return appears on the schedule, per Pederson himself. A tumultuous relationship with the previous staff plus last season’s injury saw Robinson fall out of sight and out of mind this offseason. Those roadblocks now appear to be in Robinson’s rearview mirror. The Rockford, Illinois native is an underrated ball-carrier that’s fully capable of producing yet another 1,000-yard campaign.

Much remains undecided in Jacksonville’s backfield, but Robinson possesses the outlook necessary to experience a successful campaign in 2022.