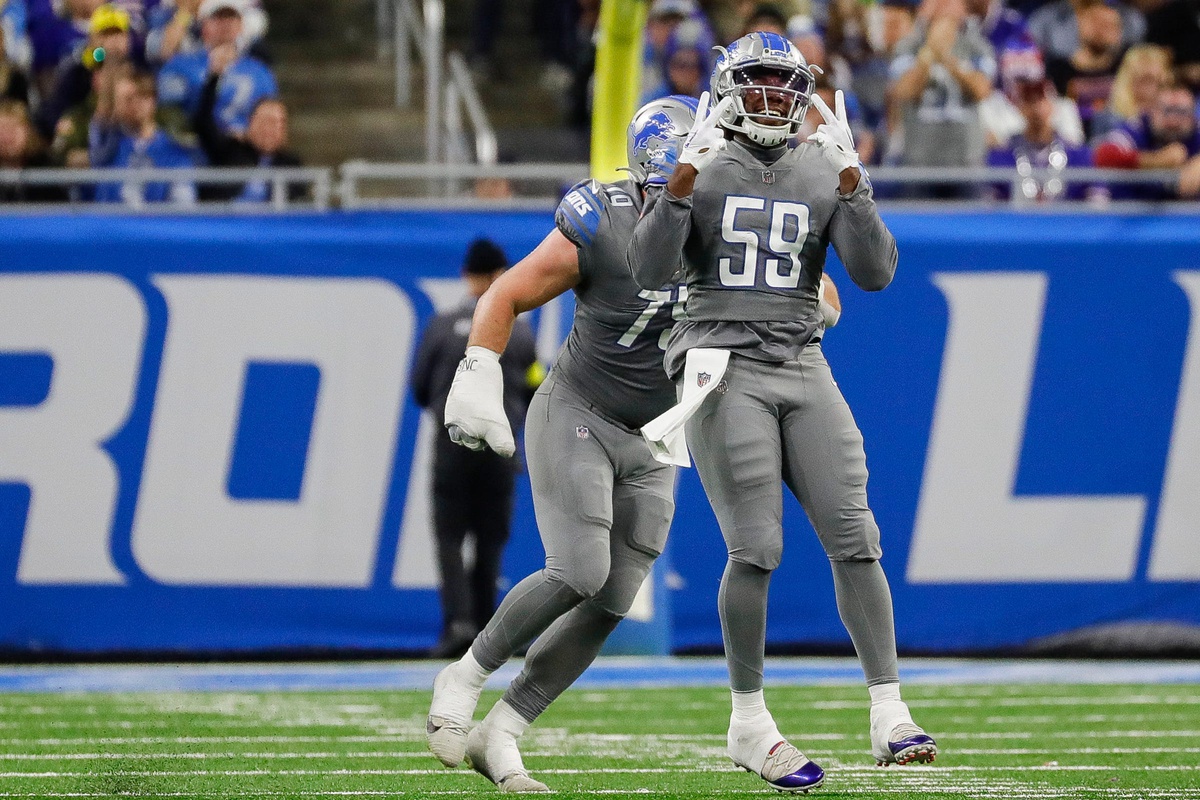 Detroit Lions rookie outside linebacker James Houston IV announced himself to the world with an eye-popping performance during his team’s Thanksgiving loss to the Buffalo Bills. Houston, who was playing in his first career NFL game, recorded 2.0 sacks and recovered a fumble on special teams. Houston is an intriguing rookie who may have played himself into a larger role moving forward.

Houston recorded his second sack in the third quarter. Houston first beat the block of running back Devin Singletary, who ran a delayed route after chipping-and-releasing, and then defeated Bills fill-in left tackle David Quessenberry around the edge. Houston showcased terrific effort as he chased down a scrambling Josh Allen and dragged him down from behind.

The rookie said watch me do it again! #BUFvsDET | 📺 CBS pic.twitter.com/TIw9hqDPr4

The No. 217 overall selection in the 2022 NFL Draft, Houston failed to make Detroit’s initial 53-man roster out of training camp. He was waived on August 30 and promptly added to their practice squad. On Thursday, Houston served as a standard elevation to Detroit’s game-day roster.

Houston was added as insurance for Josh Paschal and Charles Harris, who both missed out with injuries. Houston will now revert back to the practice squad on Friday. Lions general manager Brad Holmes may be forced to add Houston to Detroit’s roster before other teams attempt to poach him off the practice squad, however. His performance did not go unnoticed around the league.

A small-school gem, Houston became the first player drafted out of Jackson State since Deion Sanders took over as the head coach. Sanders is building something special with the Tigers program. Houston’s development is a resume-builder for Sanders, who’s turning his Tigers into a SWAC powerhouse.

Houston actually began his college career at Florida, but eventually entered the transfer portal after a pair of disappointing seasons. A suspension forced Houston to redshirt during his true freshman season. Houston later failed to secure a starring role for himself as a reserve linebacker during his redshirt freshman campaign. Houston arrived at Jackson State after transferring to the program ahead of the 2021 season.

Houston immediately became a big-time playmaker for the Tigers. The HBCU standout recorded 70 tackles, 24.5 tackles for a loss, 16.5 sacks, seven forced fumbles, and an interception in 2021. Houston was named first-team All-Southwestern Athletic Conference for his efforts. It convinced the Lions to utilize a sixth-round selection on his services.

Houston enjoyed fruitful showings at the NFLPA Bowl and East-West Shrine Game in front of dozens of pro scouts and NFL decision-makers. Houston’s intriguing athletic traits were also on display throughout the pre-draft process. The Fort Lauderdale, Florida native leaped a 39-inch vertical and 10-foot, 5-inch broad jump. We witnessed Houston’s natural abilities translate to the field against the Bills on Thursday.

The competitive Lions remain in rebuilding mode. Holmes will evaluate his roster down the final stretch as he searches for long-term contributors to develop. Houston will now receive additional opportunities to prove he’s a legitimate NFL talent. James Houston looks capable of capitalizing.