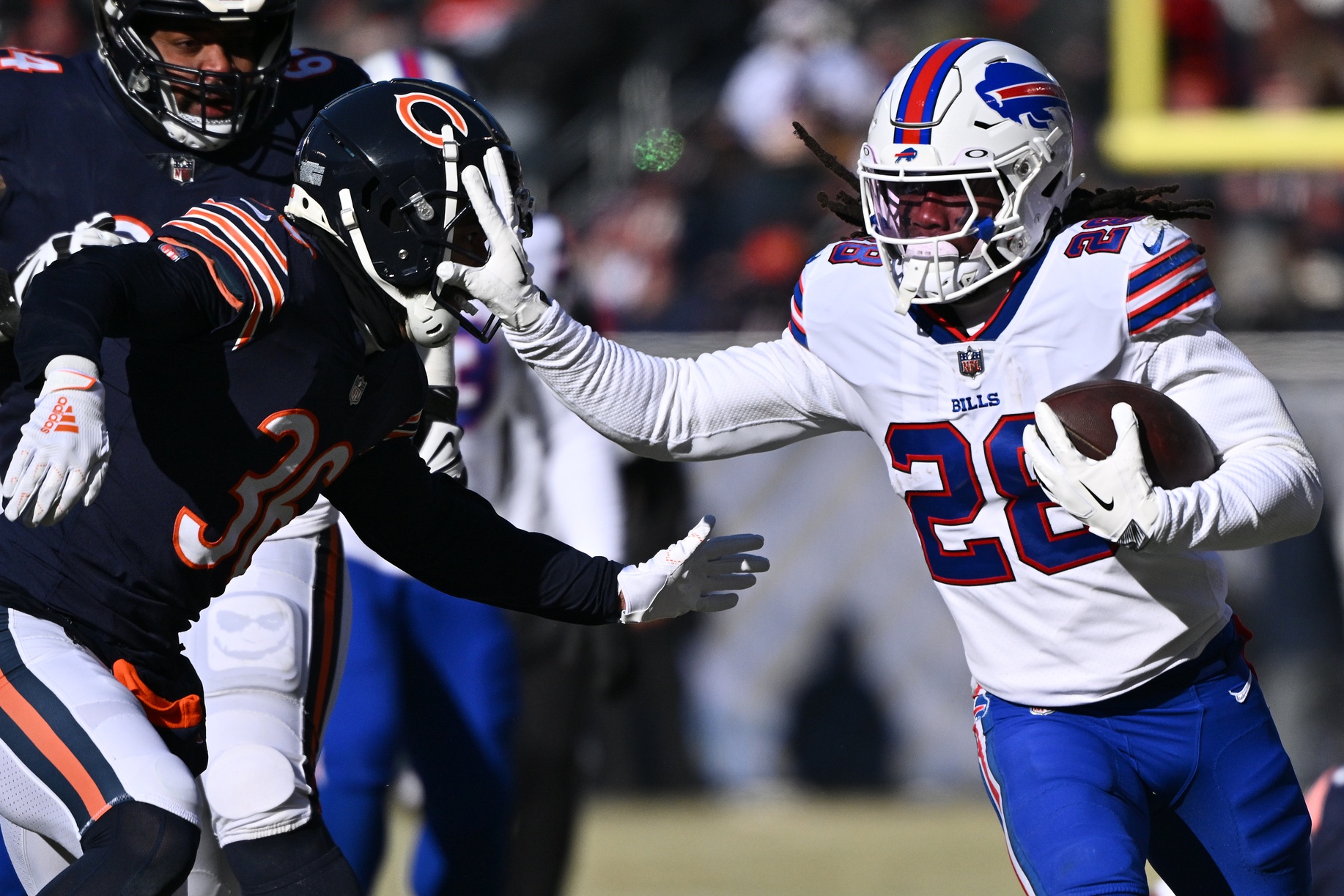 Buffalo Bills rookie running back James Cook was outstanding in Saturday’s dominant victory over the Chicago Bears. Cook rushed for 99 yards and a touchdown via 11 carries (9.0 yards per carry). The Bills must continue utilizing Cook in a 50-50 timeshare split alongside Devin Singletary.

Bills offensive coordinator Ken Dorsey is beginning to rotate Singletary and Cook with increased frequency. Singletary led Buffalo’s backfield against the Bears with 37 snaps (58% of Buffalo’s offensive plays), but Cook didn’t trail far behind Singletary with 26 offensive snaps (41%). In Week 14, Singletary out-snapped Cook 29-24. The splits were even closer (33-32) in Week 13. Cook has closed the gap.

Cook is gaining traction to become Buffalo’s lead ball-carrier. Pressure has officially been placed on Singletary, who responded in excellent fashion. Singletary wasn’t outdone by Cook against the Bears, gaining 106 yards and scoring a touchdown on 12 carries. Singletary’s 8.8 yards per carry ensures he’ll maintain a sizable role moving forward despite Cook’s recent breakout performances. Things have clearly shifted. Singletary out-snapped Cook 60-14 as late as Week 12. Cook is earning the complete trust of Buffalo’s coaching staff. His snaps and workload have increased as a result.

Cook’s campaign didn’t begin in an ideal fashion. The No. 63 overall selection in the 2022 NFL Draft fumbled in Buffalo’s regular-season opener. Cook was also held to eight-or-less rushing yards in four of Buffalo’s opening six contests. A switch flipped for Cook from late November on. Cook has recorded 371 yards of total offense as a dual-threat rusher and pass-catcher in Buffalo’s high-octane offense via his last six showings. Cook is averaging 1.58 yards per route run as a receiver, per Next Gen Stats.

Buffalo’s passing attack commands all the attention, but their ground-game success deserves acknowledgment as well. The Bills are currently averaging 142.8 rushing yards per contest. Dual-threat quarterback Josh Allen helps, but this is currently the Singletary and Cook show. They’re the eighth-ranked unit in that department, placing them in the company of other elite rushing offenses such as the Dallas Cowboys and Philadelphia Eagles. Cook has helped catapult Buffalo’s rushing attack up the leaderboard.

Cook has been particularly elusive. The former Georgia standout is averaging 2.99 yards after contact per attempt and has forced 16 missed tackles, per Pro Football Focus. A big play waiting to happen, Cook has accounted for 11 explosive (10-plus yards) gains as a ball-carrier. Four of Cook’s 11 explosive rushes have occurred in Buffalo’s last two games.

The Bills are utilizing Cook via multiple schemes and concepts. Of Cook’s 80 rushing attempts, 39 of them have been of the gap variety, with 33 additional attempts via zone-based concepts, per PFF. It speaks to the multiplicity of Buffalo’s offensive approach and Cook’s ability to handle multiple tasks. Cook has had success while running behind Bills left tackle Dion Dawkins. Cook is averaging 8.9 yards per carry (71 yards on eight attempts) when running behind Buffalo’s left tackle.

Cook’s emergence makes Buffalo’s offense considerably more versatile. The Bills are swiftly heading toward the postseason with a dynamic one-two punch in the backfield. James Cook raises the ceiling for the Super Bowl-contending Bills.