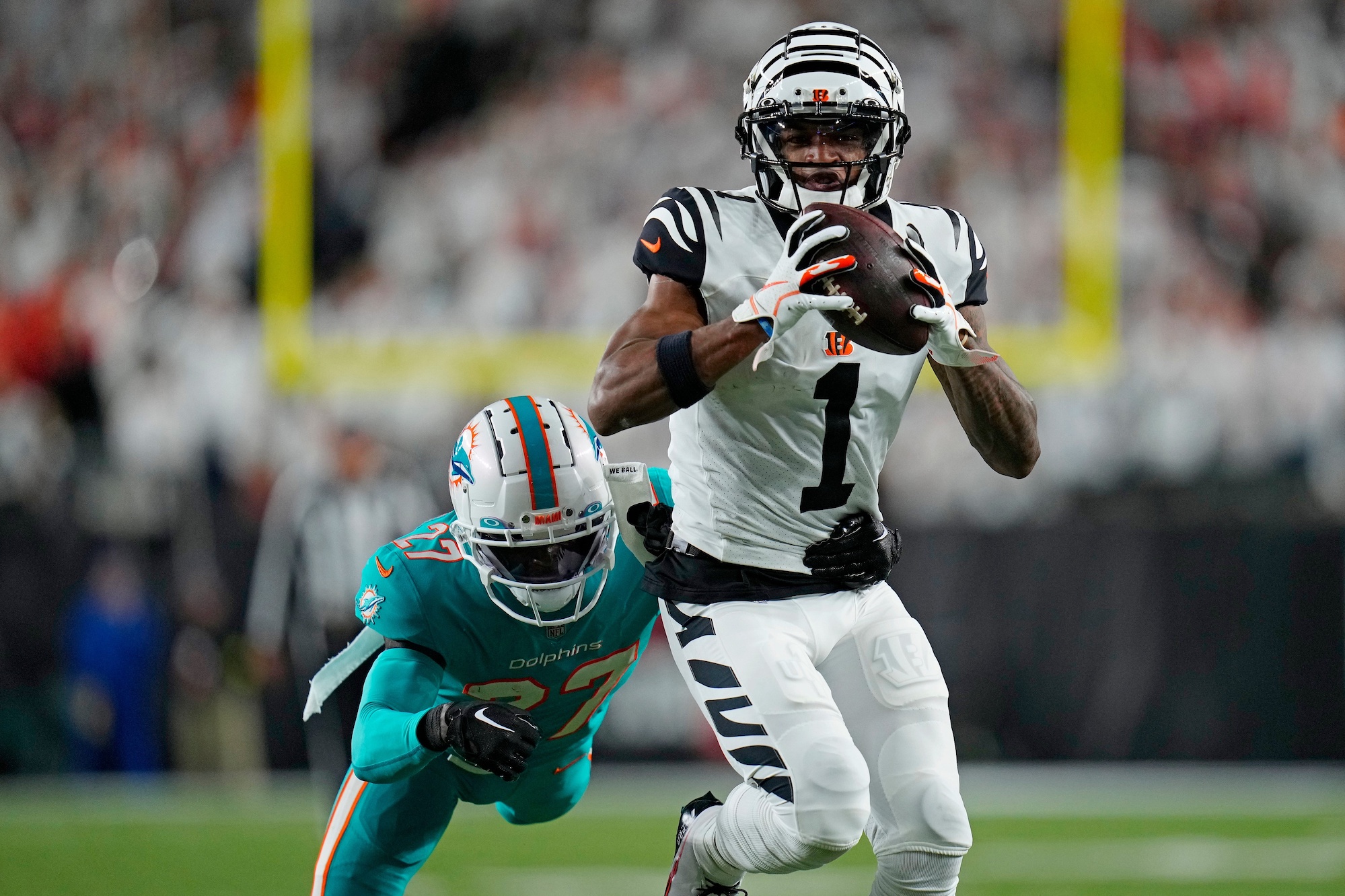 The Cincinnati Bengals claimed a crucial victory over the Miami Dolphins on Thursday. It marked consecutive wins for the Bengals, who are now 2-2 and back in the divisional race in the unpredictable AFC North. Cincinnati’s offense continues to work through some kinks, however. The lack of success for superstar wide receiver Ja’Marr Chase has been both confusing and disappointing.

Chase appears to be the Bengals’ No. 2 receiver based on production when extrapolating his numbers throughout the course of a 17-game season. Bengals head coach Zac Taylor must address this immediately.

Chase recorded four receptions for 84 yards against the Dolphins. This included a trick play that saw Tyler Boyd complete a 23-yard pass to Chase. It stunk of desperation.

Tyler Boyd completes a pass to Ja’Marr Chase for a gain of 23 yards.#MIAvsCIN on Prime Video
Also available on NFL+ https://t.co/Phmgdb9VGl pic.twitter.com/UiPCTJY5KS

Through four contests, Chase has totaled 25 catches for 293 receiving yards and two touchdowns. Chase has converted just 60.9% of his targets (25-of-41) into receptions. Fellow receiver Tee Higgins is leading the Bengals in receiving yards (315) despite missing Week 1 with an injury. Higgins is also averaging 4.1 more receiving yards per catch than Chase is (15.8 for Higgins, 11.7 for Chase). Higgins is Joe Burrow’s go-to receiver as things stand.

Opposing defenses have certainly adjusted the manner in which they approach Chase in coverage following his historic rookie campaign. Chase is seeing more bracket coverage as defenses draw safeties to his side of the field. Taylor and the Bengals aren’t being creative enough to place Chase in advantageous situations, however. The Bengals can’t simply accept Chase’s new reality. Taylor and offensive coordinator Brian Callahan must comb through the film while highlighting solutions to Chase’s current ineffectiveness.

Chase should be running crossing routes, digs, and screens with more consistency. Getting Chase in the open field with prime yards after catch opportunities could lead to the desired improvement. Taylor has been utilizing Chase in a rather unimaginative manner. It requires immediate addressing.

Chase is currently averaging 10.25 targets, 6.25 receptions, 73.25 receiving yards, and 0.5 touchdowns per contest. The raw numbers indicate improvement is pending. Based on last season’s outputs, Chase is averaging nearly three more targets (7.5) and two more receptions (4.76) per contest than he did in 2021. It’s the efficiency that’s down. Chase averaged 85.5 receiving yards (12.25 more yards per contest last campaign) and 0.76 touchdowns per game last season. Chase is averaging nearly seven fewer yards per catch (18.0 in 2021, 11.7 in 2022) as opposing defenses attempt to limit his explosive plays.

Chase’s struggles can also be linked to the Bengals’ offensive downgrades. The Bengals are currently scoring 22.8 points per contest. Burrow and Cincinnati’s passing offense is averaging 257.3 yards through the air. It’s slightly fewer yards and nearly five fewer points (27.1) compared to last season’s output. The Bengals are essentially scoring one less touchdown per game. Getting Chase going would undeniably improve these numbers.

Ja’Marr Chase will eventually break out if all parties involved approach his current struggles with the correct mindset. It requires more creativity than Taylor has displayed. The Bengals can’t continue keeping their Ferrari in the garage.