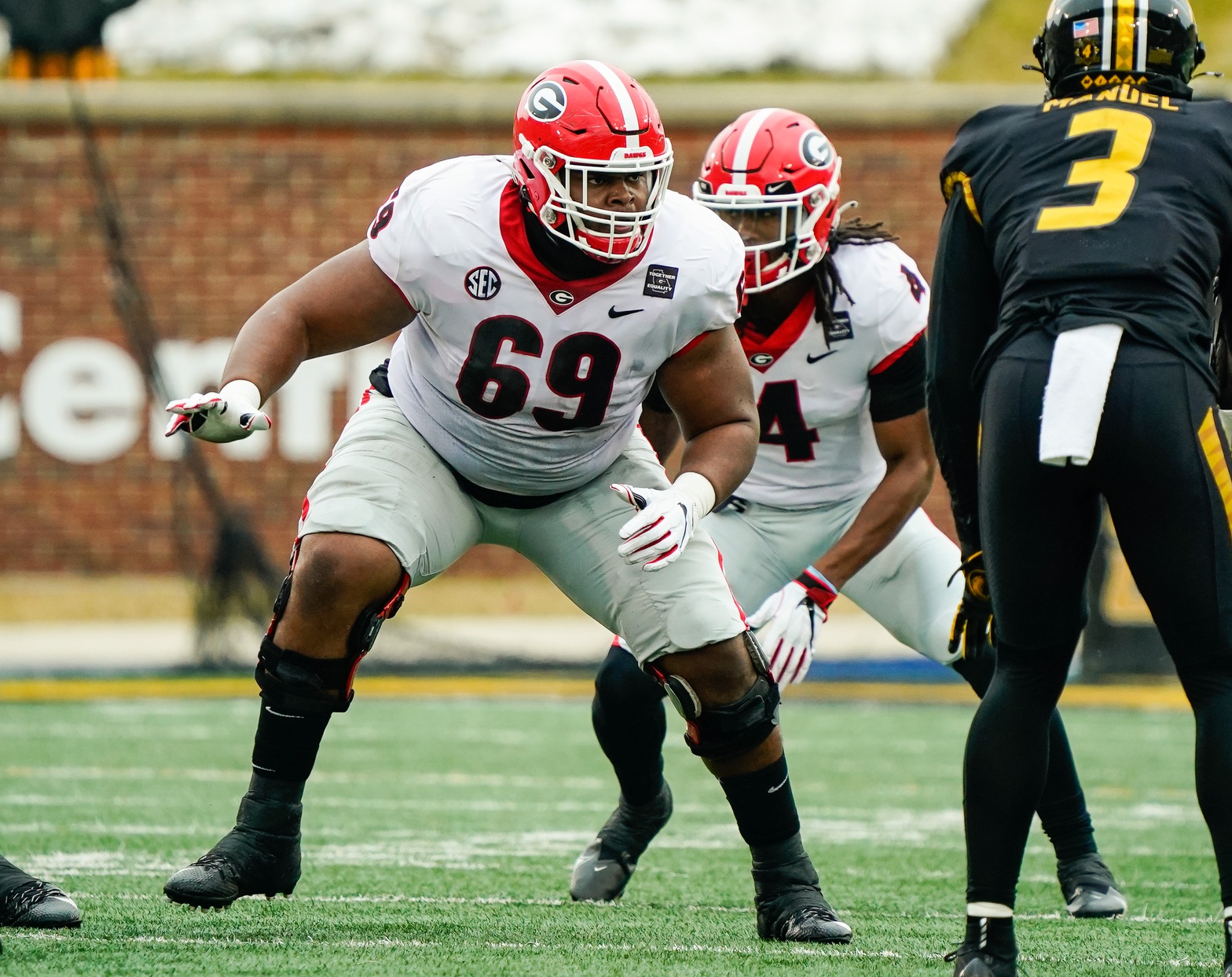 After defeating Jim Harbaugh’s Michigan Wolverines to officially punch their ticket to the CFP national title game—and a rematch with Alabama—flipping on the tape of Georgia’s dominant performance was a New Year's treat for the football eye. As much attention is drawn to the defensive side of the ball for Georgia, where the historic group of 11 tout pro-ready prospects at all three levels, a spotlight to the front five tasked with protecting quarterback Stetson Bennett proved to be the most impressive group on the field. With projected top-two pick Aidan Hutchinson and day-one talent David Ojabo lined up opposite, the play of Jamaree Salyer proved extremely impressive from the opening snap of the ball game. An unrelenting effort from the true senior that eliminated the two aforementioned edge threats off the sack sheet and away from Bennett, it’s time we turn our attention in the scouting world to a player whose dominance shouldn’t go overlooked as a mere flash in the pan. While it was easy to point out a game MVP for Georgia in Bennett or versatile ball-carrier James Cook, who totaled more than 100 receiving yards, the play of Salyer to keep Hutchinson and Ojabo’s impact at neutral is a stat that won’t pop off the post-game box score. Held to just three tackles combined, the two Wolverine defenders that have made it a habit to wreak havoc in opposing backfields all year long were mute on the broadcast and vacant on the All-22. But, this isn’t the first time Salyer has shut down one of CFB’s most intimidating 5-techs, as a quick look back to his play in the SEC championship against Alabama’s front, and, specifically, against Will Anderson, that has put a jetpack on Salyer’s draft stock as we approach the national title game next week. A stoutly-built prospect who’s lived on the left of the side of the line for head coach Kirby Smart, Salyer’s stocky build makes him tough to maneuver in both facets of the Bulldogs’ offense. While other bookends are blessed with pterodactyl-like length to consistently ‘win first’ with their hands, while Salyer has sufficiently long enough arms to control and stymie defenders, his versatility and ability to fluidly move upfield in the run game could see his best days inside at the guard spot on Sundays. However, as good as he was Friday evening, a failure to point out the ugly wouldn’t do justice on where he needs to show his biggest improvements. While his performance failed to allow a sack or a slew of pressures, Salyer was flagged multiple times for a facemask and a chop block that set the offense back behind the sticks. And although the penalties failed to amount to anything considering the state of the game, it’s something he’ll be forced to avoid in his rematch against the Crimson Tide, as each snap’s importance is extrapolated to the umpteenth degree when a ring is on the table—especially against Nick Saban’s group. Currently the sixth-ranked interior offensive lineman with a third-round evaluation from our scouts, Salyer has a boatload of room to grow in all facets of his impressive game. While the likes of Kenyon Green, Zion Johnson, and Darian Kinnard have headlined the guard class, it speaks volumes how much Salyer has popped this year with free space to his outside shoulder despite his pro projection coming as a true interior mover. A powerful prospect whose elite lower half possesses outstanding lateral agility with excellent flexibility in his hips to create massive creases in the run game and ideal technique to anchor in the pass game, his name should have the boldest of red dots next to it as Georgia and Alabama square off on Jan. 10.