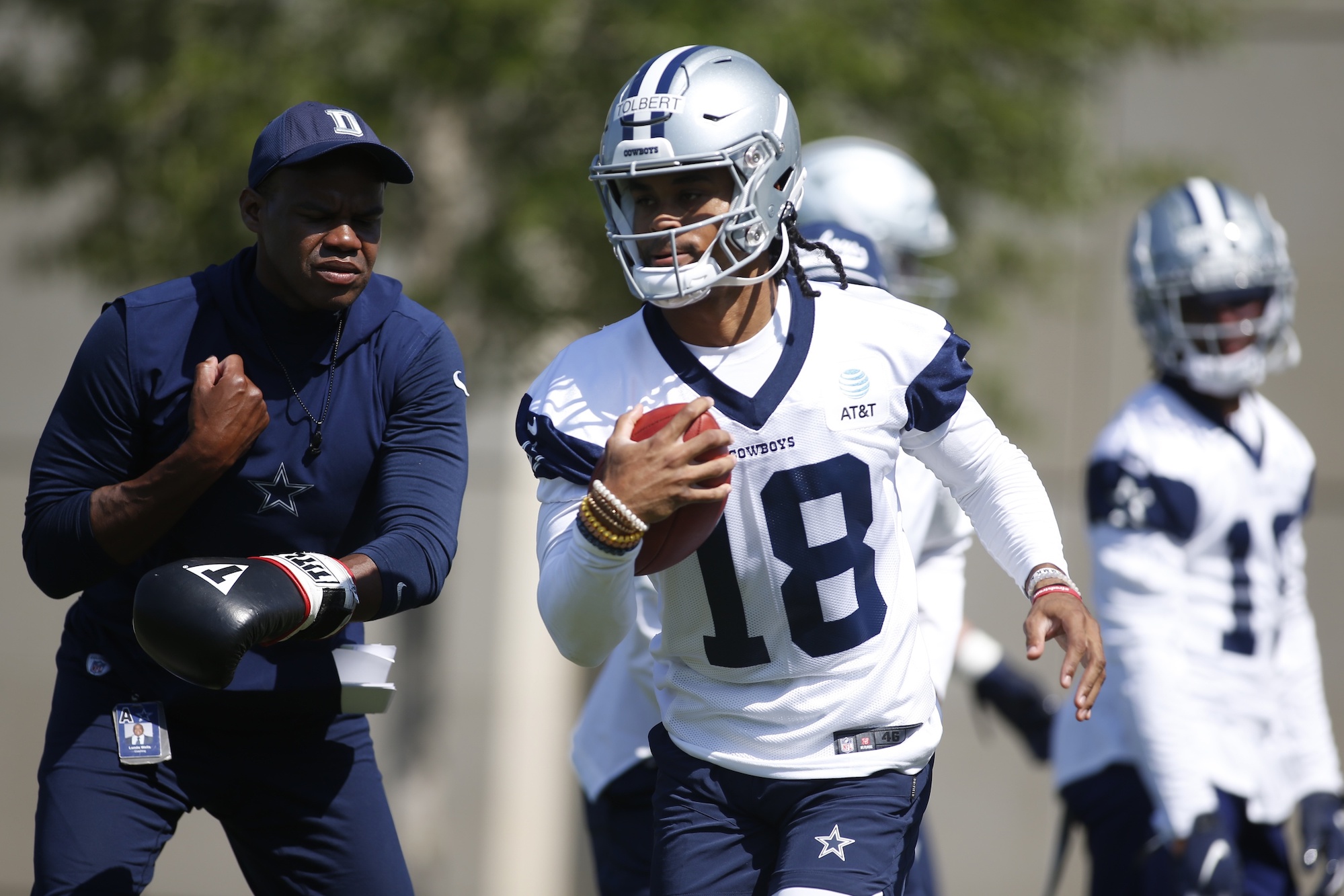 The Dallas Cowboys are going to field a new-look offense in 2022. Salary cap-related difficulties forced Jerry and Stephen Jones to part with several high-level offensive contributors this offseason. Change is especially afloat across the offensive line with Connor Williams and La’el Collins both signing elsewhere in free agency. The receiver position is another key spot that’s been negatively affected by Dallas’ financial issues. Amari Cooper was traded to the Cleveland Browns in exchange for a fifth-round selection and a swap of sixth-round picks in the 2022 NFL Draft, and Cedrick Wilson Jr. signed a lucrative contract with the Miami Dolphins. The Cowboys had to find creative solutions for their new-found pass-catching woes, and drafting South Alabama’s Jalen Tolbert with the No. 88 overall selection in the 2022 draft carries the potential to pay immediate dividends based on Tolbert’s first impression at Dallas’ recent rookie mini-camp.

“He’s awesome,” Cowboys offensive coordinator Kellen Moore recently said in response to a question regarding Tolbert’s abilities and overall fit in Dallas’ offense. “I think he works his tail off. I think you can tell how prepared he is and how detailed he wants to be. I think he’s going to be a really good addition for us.”

It’s no surprise to hear Tolbert earning the praise of his coaches so early into his career as a Cowboy. Tolbert possesses an excellent combination of size (6-foot-1, 194 pounds) and speed that should allow him to quickly develop into a versatile and effective receiver at the next level while continuing to finetune the intricacies of his game. Tolbert impressed decision-makers at the NFL Scouting Combine by running the 40-yard dash in a respectable 4.49 seconds. The Mobile, Alabama native also recorded a 36-inch vertical and 123-inch broad jump. Landing Tolbert with a third-round selection represented terrific value for a Cowboys franchise that was forced to revamp their pass-catching playmakers.

Tolbert possesses a rare opportunity to immediately establish a role within Dallas’ high-octane passing offense. The departures of Cooper and Wilson have left obvious holes. CeeDee Lamb remains in place as Dallas’ primary receiving option, but the returning Michael Gallup suffered a season-ending torn ACL injury in a Week 17 loss to the Arizona Cardinals. Gallup is currently expected to target an October or November return if all continues going well during his rehabilitation process. The Cowboys, who averaged the league’s second-most passing yards per contest in 2021 (282.4/game), are expected to give Tolbert a fair opportunity to make an impact in two-and-three receiver sets as an early-down option and potential Gallup replacement, at least momentarily.

Gallup’s injury may force Tolbert into an early role regardless, but the key to ultimately determining Tolbert’s overall outlook as a rookie may depend on how he fares in direct competition against recently signed receiver James Washington. The cash-strapped Cowboys inked Washington to a shrewd one-year contract worth just $1.035 million, per Spotrac. A former second-round selection of the Pittsburgh Steelers in the 2018 NFL Draft, Washington joins the Cowboys on a short-term prove-it deal after failing to consistently stand out in Pittsburgh.

Washington did enjoy a rather fruitful campaign in 2019 as a sophomore, having recorded career-highs in receptions (44) and receiving yards (735). Washington’s role in Pittsburgh’s passing offense would diminish considerably in 2020 and 2021, and his downfield vertical ability was a mismatch for Ben Roethlisberger’s dwindling arm strength and a Pittsburgh offense that preferred to attack the short-to-intermediate areas of the field. Washington is a much better fit in a pass-first Cowboys offense that features the always-electric Dak Prescott at the helm.

Starting jobs aren’t locked down or confirmed in mid-May, but all signs point to Tolbert making a quality first impression on Dallas’ coaching staff. Monitoring Tolbert’s progress throughout the summer is something worth partaking in. A retooled pass-catching corps may require Tolbert’s immediate contributions if they hope to reach the heights of last season.