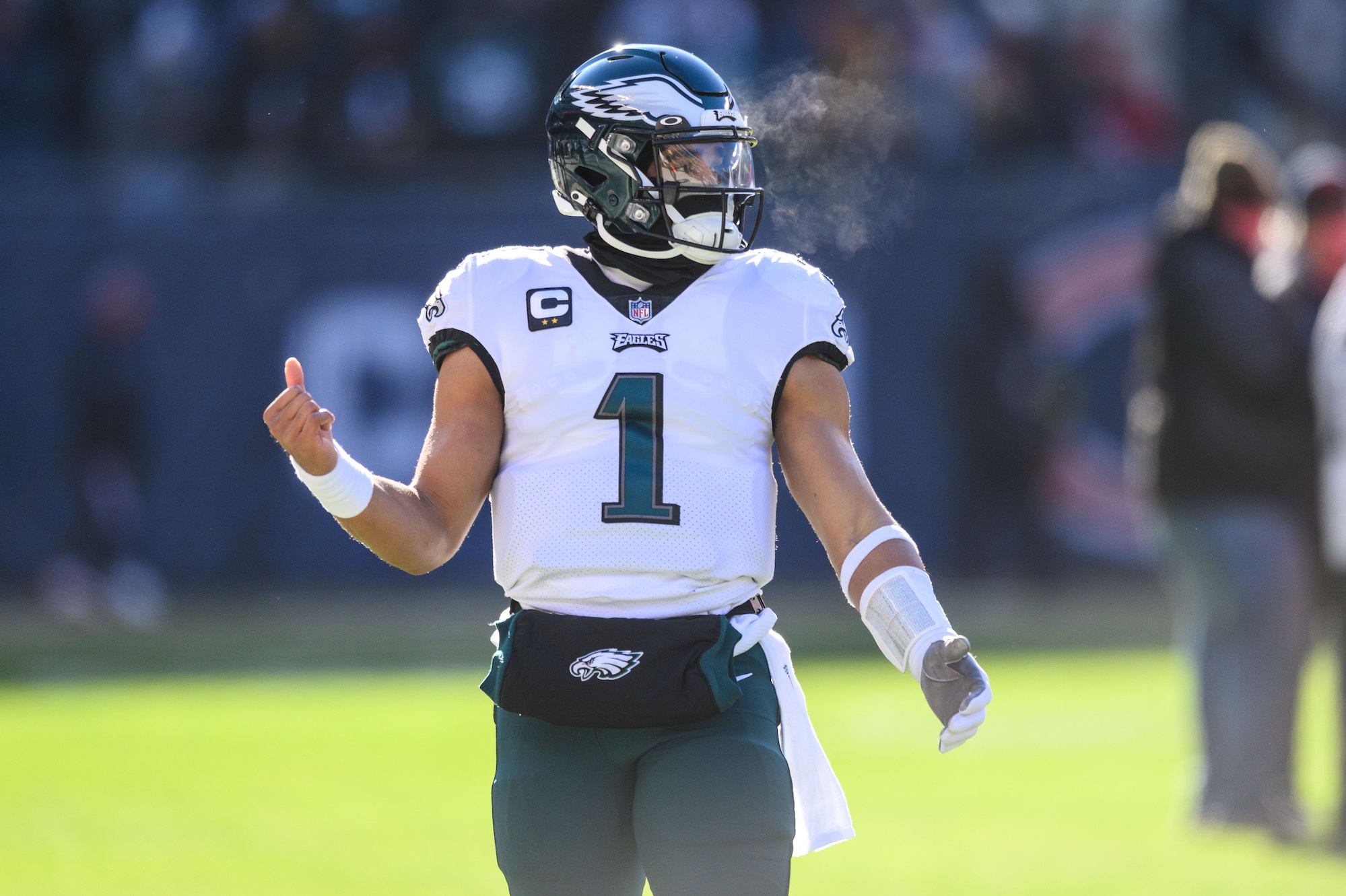 An absolute bombshell was announced on Monday afternoon. Philadelphia Eagles starting quarterback Jalen Hurts has been diagnosed with a sprained shoulder injury, according to multiple reports. Hurts will likely miss Saturday’s NFC East showdown against the Dallas Cowboys and is expected to be sidelined for multiple contests. Hurts’ health looms large moving forward because the Eagles aren’t capable of winning Super Bowl LVII without Hurts.

The sprain is to Hurts’ throwing shoulder. The injury occurred when Chicago Bears third-year defensive end Trevis Gipson drove Hurts into the ground during the third quarter of Philadelphia’s victory. Hurts miraculously managed to finish the contest.

Hurts is a legitimate MVP candidate. The No. 53 overall selection in the 2021 NFL Draft, Hurts has led the Eagles to a league-best 13-1 record. The Eagles are inching towards clinching the No. 1 seed in the conference and home-field advantage throughout the postseason, but Philadelphia’s lofty expectations rely on Hurts’ availability.

Philadelphia’s offensive success revolves around running the football. They’re averaging 158.6 rushing yards per contest. They’re the fourth-ranked rushing offense across the league and are averaging a second-best 29.4 points per contest largely as a result of their run-game prowess.

Hurts ranks second among all Eagles ball carriers with 747 rushing yards. Justin Fields (1,000) and Lamar Jackson (764) are the lone quarterbacks to out-gain Hurts via the ground game. Hurts leads the Eagles in rushing touchdowns with 13 scores. Hurts is averaging 4.8 yards per carry and 11.1 rushing attempts per contest. The mere fundamentals of Philadelphia’s offense change without Hurts.

Hurts has also taken sizable steps forward as a passer throughout his sophomore campaign. The former Oklahoma and Alabama standout has completed 67.3% of his passing attempts this season en route to throwing for 3,472 yards and 22 touchdowns versus just five interceptions. The threat of Hurts’ legs has aided his progress as a passer. It also made Philadelphia’s offense an unstoppable juggernaut.

The Eagles will now turn things over to Gardner Minshew. Minshew is a high-level backup quarterback that’s capable of momentarily leading the Eagles to victories. The Eagles should still march into the postseason as the NFC’s one-seed with a first-round bye. Minshew isn’t a like-for-like replacement for Hurts, however, and Sirianni’s offense becomes more predictable as a result.

Minshew is capable of spreading the ball around to Philadelphia’s pass-catching weapons such as A.J. Brown and DeVonta Smith, but opposing defenses aren’t going to fear Minshew’s ability to hurt them with his legs via Sirianni’s bread-and-butter option plays. Minshew is mobile enough to rush for a few yards, but he’s totaled just 516 career rushing yards through three-and-a-half campaigns—not exactly Jalen Hurts-like numbers.

Eagles fans may cling to Nick Foles‘ Super Bowl LII heroics in the meantime. In what may feel like an eerily similar situation, Foles replaced MVP-candidate quarterback Carson Wentz due to injury and shockingly led the Eagles to glory. The difference between that and this is that the Eagles didn’t have to fundamentally change the baseline of their offensive approach. Philadelphia’s offense goes where Hurts takes them.

Hurts has proven his status as Philadelphia’s franchise quarterback of the future throughout the 2022 campaign. His ascension from borderline starter to elite signal-caller has been televised. The Eagles are capable of winning Super Bowl LVII, but only with a healthy Jalen Hurts spearheading their efforts.