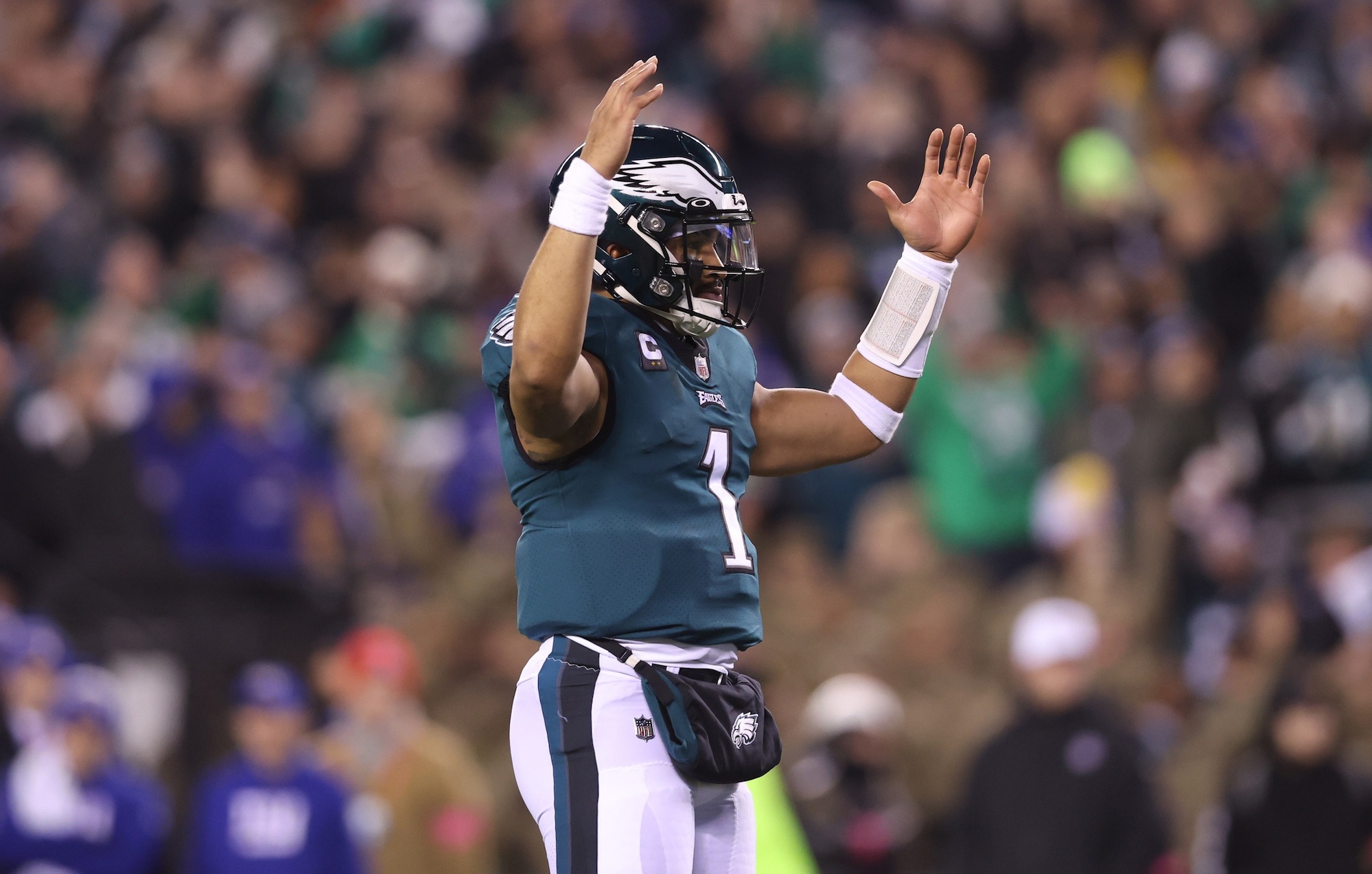 Philadelphia Eagles star quarterback Jalen Hurts just helped boost his team to a blowout of the New York Giants in the divisional round this past weekend. Even so, he’ll face a much stronger San Francisco 49ers defense in the NFC Championship game next Sunday. What might it take from Hurts and head coach Nick Sirianni to give the Eagles’ offense the best chance to succeed and bring the team back to the Super Bowl for the second time in six years?

Against the Giants, the box score would suggest Hurts didn’t really have to put the offense on his back the way he had in several of the Eagles’ wins this season. Running backs Kenneth Gainwell and Miles Sanders had their way with New York’s run defense while Hurts just managed the offense as its signal-caller. That’s partly true, but it doesn’t take into account the added context of Hurts’ gutsy performance just five weeks after spraining his throwing shoulder, which caused him to miss two games.

In truth, Hurts’ performance—especially in light of his recent injury—was fantastic. He didn’t turn the ball over once and made some great throws that never would have revealed there was anything wrong with his arm in the first place.

Jalen to DeVonta. Good for 33 yards!

According to Hurts, he still wasn’t—and likely isn’t—at 100% health-wise, but with the strong play of the offensive line in front of him and the mental toughness he plays with, it didn’t really matter. He answered the call when he had to and took advantage of the Giants’ defensive weaknesses with his arm and his legs.

As impressive as Hurts was as the leader of the offense and complement to the Eagles’ dominant run game this past Saturday, he still has some big questions to answer when Philadelphia hosts the 49ers on Sunday. Namely, will he be able to continue stepping up to the challenge with a still-not-100% throwing shoulder against a stouter defense?

Where New York had a glaring weakness defending the run all season, San Francisco is the polar opposite. Their defense, particularly against the run, was the NFL’s best this season. They allowed fewer than 78 rushing yards per game throughout the regular season and just 62 yards per game to running backs so far this postseason. So against the 49ers on Sunday, the Eagles may have to lean even more heavily on Hurts and the passing game.

For Hurts, the biggest key to beating the 49ers on the offensive side of the ball will be avoiding mistakes. A big reason San Francisco secured the second seed in the regular season and has made it to the NFC Championship for the third time in four years is their ability to generate turnovers. They led all teams in the regular season with a turnover margin of +13 and were second in the NFL with 30 defensive takeaways, including a league-leading 20 interceptions.

On Sunday evening, the 49ers turned two Dak Prescott interceptions into six points as the Cowboys lost by seven. Hurts is going to have to avoid costly errors like those to keep the Eagles in front. One way to do so is taking what the defense gives him and spreading the ball around to his different targets, something Prescott didn’t do (23 of his 37 pass attempts on Sunday targeted either Lamb or tight end Dalton Schultz) and something Hurts has done well all season.

Another key for Hurts is taking advantage of his mobility by using his legs when he can, both on designed runs and scrambles. Sirianni showed on Saturday night that he’s willing to call more designed runs for Hurts now than he did at the end of the regular season when the quarterback was working his way back from injury. Those designed runs make the offense more difficult to read and could put additional pressure on the 49ers’ defense to account for Hurts’ legs.

On the flip side, Hurts should be ready to take advantage of scrambling opportunities as well. If the offensive line continues to dominate the trenches the way they have all season, the third-year quarterback will be well-protected once again, but that doesn’t mean he shouldn’t take off running if an opportunity presents itself.

Obviously, limiting the risk of aggravating Hurts’ shoulder injury comes into play for those decisions, but the quarterback’s mobility is a big part of what makes him a special talent at the position. For the Eagles’ offense to take down the NFL’s best defense, they need to be able to take advantage of Hurts’ full skill set if and when they can.

Any way you look at it, Hurts is primed to play a key role in Philadelphia’s final test to secure another Super Bowl appearance. For the Eagles to be successful on offense, the quarterback needs to limit mistakes as a passer and take advantage of his mobility when he can. If he can do those things while his team’s defense generates pressure on rookie quarterback Brock Purdy, the Eagles could win their biggest home game in five years and find themselves on the brink of winning another Lombardi Trophy.