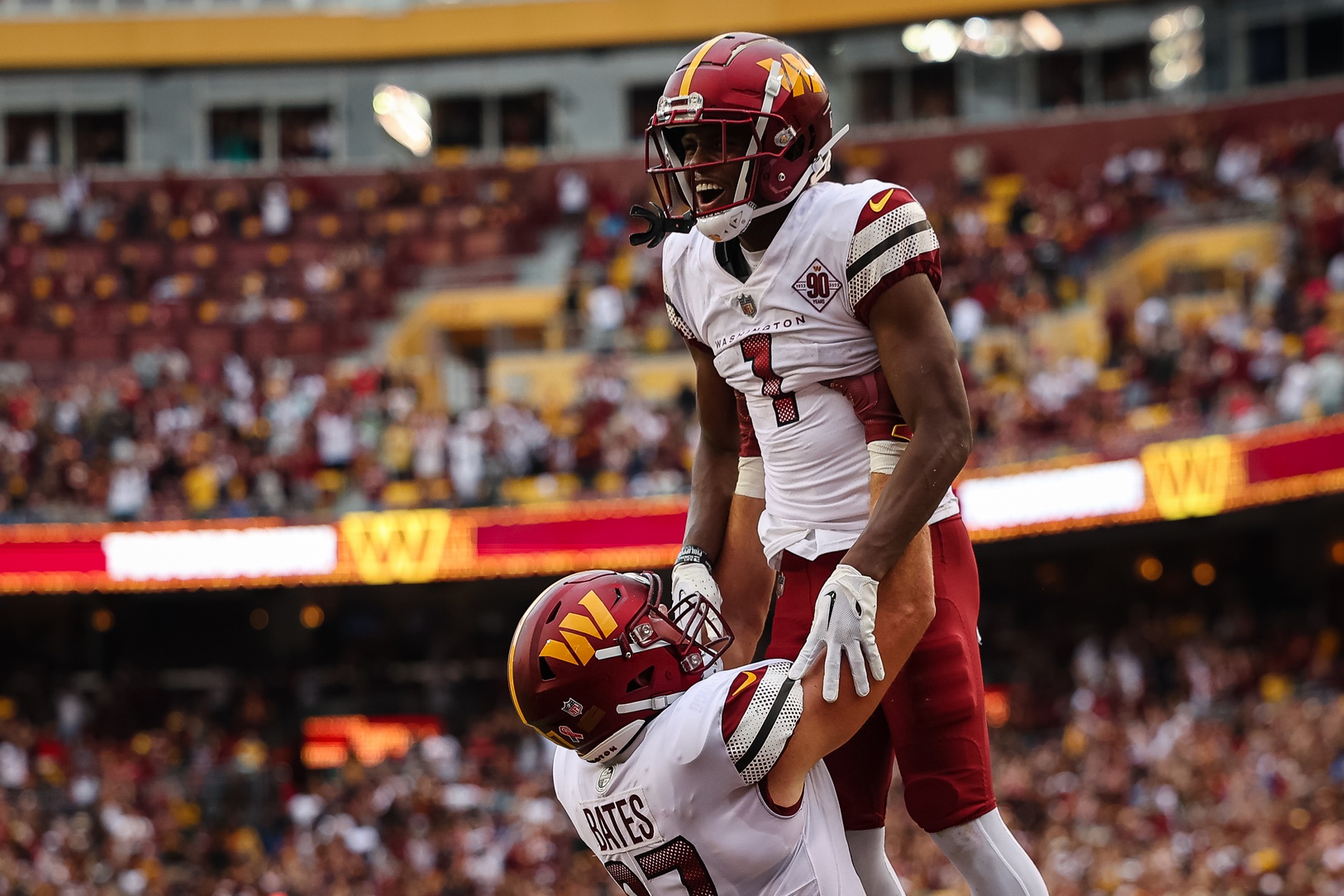 Is This Beginning Of Special Rookie Season For Jahan Dotson?

What a professional debut it was for No. 16 overall pick Jahan Dotson in what was his first taste of NFL action on Sunday. In a week 1 matchup against the Jacksonville Jaguars, Dotson didn’t waste any time in asserting himself as an impact player for the Washington Commanders on Sundays.

The 1A to Terry McLaurin, the two leaders within Washington’s passing attack stepped up when needed the most. While Dotson’s first-half touchdown put the burgundy and gold up 14-3, as the game wore on, No. 1 (Dotson) and No. 17 (McLaurin) seemingly fell out of the game plan. And while Washington took a double-digit lead into halftime, a minimal target share from Carson Wentz remained worrisome as the Jaguars began to find their footing on offense. Wentz opted to target Antonio Gibson and Curtis Samuel, leaving his two elite playmakers without much to show for heading into the fourth quarter.

Boy did things change. And quick.

Following two, ugly, horrendous, insert adjectives here to describe Wentz’s two interceptions, Washington quickly turned to their bread and butter in McLaurin. After Jacksonville scored 19 straight points, a 49-yard hookup from the Commanders’ newly-minted signal-caller to his Mr. Everything on the perimeter provided the spark they needed to get within striking distance. Dotson provided the nail in the coffin.

What was initially looked upon as a series where Washington was going to run down the clock to set up a field goal attempt, Wentz opted to go for the jugular on 3rd-and-8—a questionable decision considering the scenario if it had not been completed. There are some things you just can’t teach, and Dotson checks the “intangibles” box with a bold checkmark.

The throw wasn’t the prettiest ball in the world in comparison to Wentz’s hookup with McLaurin just a few minutes prior, but Dotson’s ability to work around Tyson Campbell—a much larger defender—and secure the pass beyond his frame while falling to the ground is just special stuff in the endzone. In what was a MASSIVE offensive series toward the outcome of the game, for a rookie to make that play, in that spot, for a stadium already set to turn on Wentz… that’s gutsy.

His play has now set the table for what’s to come. Was it a flash in the pan? Was it an appetizer for what he will be down the line in the nation’s capital? One thing is for sure: When Dotson is firing, the Commanders’ offense thrives. With attention centered around McLaurin for now, Jahan Dotson should continue to feast with eyes drawn elsewhere.