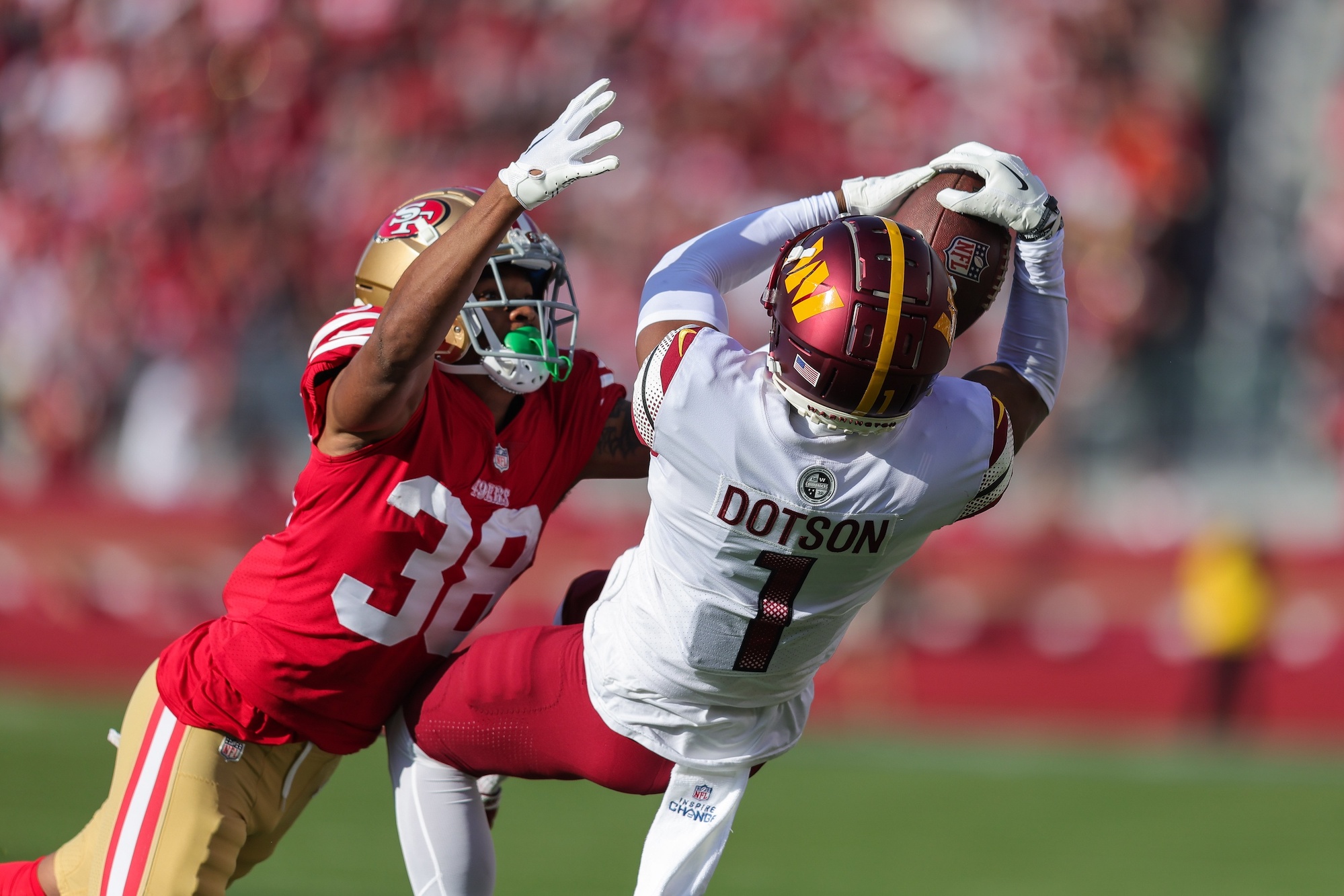 Washington Commanders rookie wide receiver Jahan Dotson was excellent in Saturday’s loss to the San Francisco 49ers. Dotson secured 6-of-9 targets for 76 receiving yards and one touchdown. Dotson is developing into an excellent complement opposite Terry McLaurin.

Dotson got loose in the back of the end zone against the 49ers’ fierce secondary. The four-yard touchdown reception tied the contest and is tied for the rookie lead in touchdown receptions (7) alongside Green Bay’s Christian Watson.

Dotson has been in excellent form throughout the entire month of December. The No. 16 overall selection in the 2022 NFL Draft has recorded 15 receptions for 235 receiving yards and three touchdowns. Dotson has caught a touchdown in three consecutive contests. Dotson has been the type of complement to McLaurin that Commanders general manager Martin Mayhew envisioned he would be.

Dotson has now recorded 29 receptions for 414 yards and the aforementioned seven touchdowns this season. Dotson has appeared in 10 of Washington’s 15 regular-season contests. Dotson leads all Commanders pass-catchers in touchdowns despite missing five games due to a hamstring injury.

Mayhew entered the offseason with a clear-cut priority to locate another passing-game weapon opposite McLaurin. Curtis Samuel has been significantly more productive in 2022, but Samuel appeared in just five games in 2021 and was labeled as one of the worst signings of that offseason. Samuel’s lackluster 2021 forced Mayhew to double down at the receiver position. He hit a home run with Dotson.

Commanders offensive coordinator Scott Turner has creatively utilized Dotson all over his formations. Dotson has lined up out wide on 399 occasions, but he’s also earned 150 snaps in the slot. Washington is moving Dotson around in search of advantageous matchups and mismatches. They’re doing an excellent job identifying such opportunities.

Dotson has been a receiving weapon in every area of the field. Dotson has recorded 200 receiving yards and two touchdowns via explosive (20-plus yards) receptions. Washington is targeting Dotson downfield. Dotson has also secured 60% of his intermediate (10-19 yards) targets for a personal-best three touchdowns. When utilized near the sticks, Dotson has caught 13 receptions for 144 yards and two touchdowns when targeted within 0-to-9 yards. Dotson’s ability to thrive at all three levels further unlocks Washington’s offensive playbook.

The Commanders signed McLaurin to a three-year extension worth $71 million earlier this year. McLaurin’s extension ties him to Washington through the completion of the 2025 campaign. Dotson’s rookie contract also runs through 2025 with a fifth-year team option for 2026. Terry McLaurin and Jahan Dotson will continue to form one of the league’s most fearsome one-two punches at receiver for years to come.