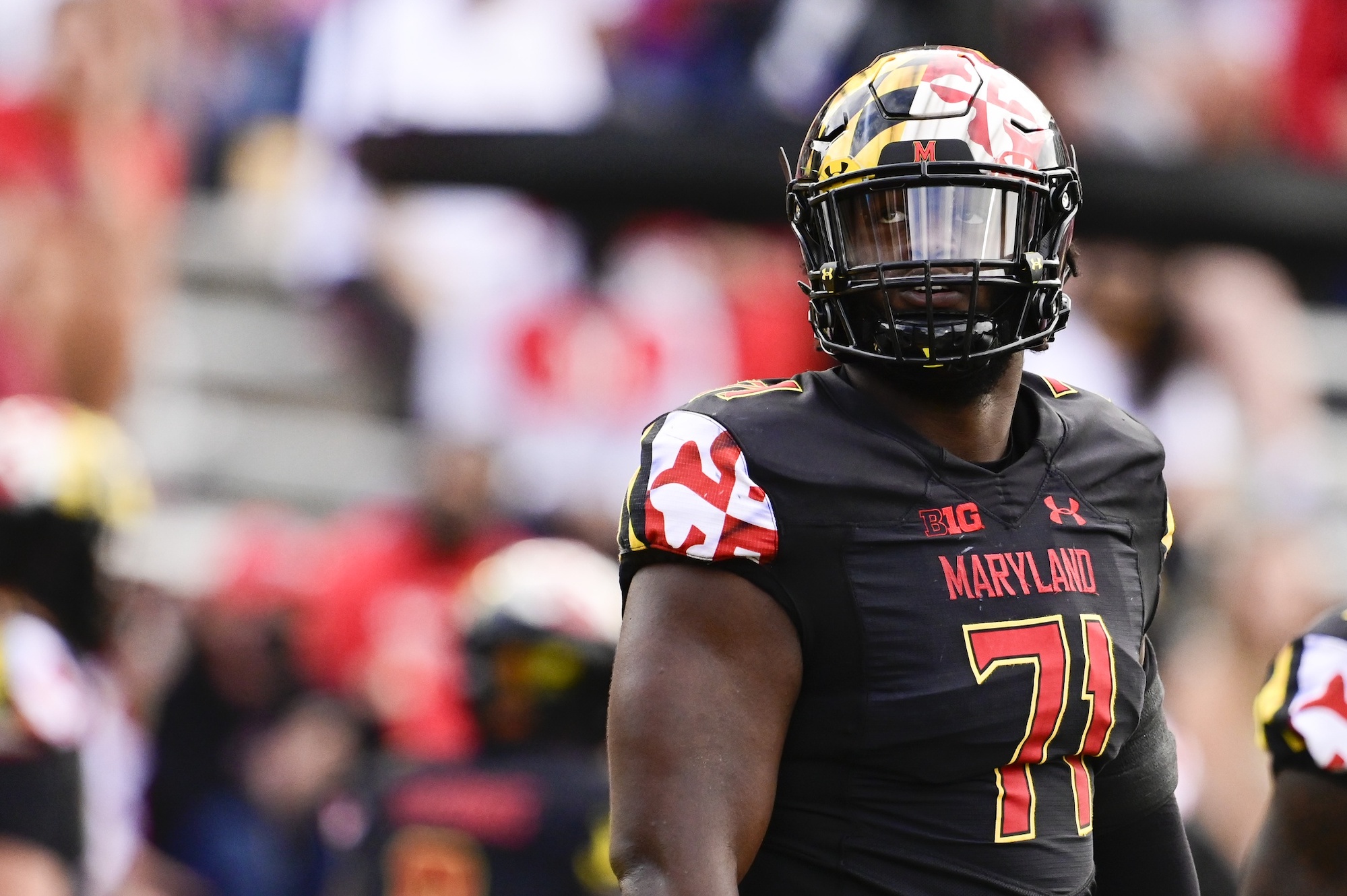 Jaelyn Duncan On How He’s Improved His Game In 2022

Offensive line play has underwhelmed throughout the early portion of the 2022 NFL campaign. Several NFL teams will aggressively be searching for necessary upgrades in the 2023 NFL Draft. Maryland’s Jaelyn Duncan possesses an excellent chance to become the first offensive tackle selected next April. Duncan possesses all the traits necessary to develop into a franchise cornerstone left tackle.

The No. 15 overall player in our latest TDN100 update and third overall selection in our latest NFL mock draft, Duncan recently spoke exclusively with The Draft Network. We discussed Maryland’s impressive 4-2 start to the season while simultaneously looking ahead to their impending showdowns with Indiana, Penn State, and Ohio State. Duncan also discussed his overall identity as a blocker, how he handles speed differently from power in pass protection, how he uses his outstanding size and athleticism to his advantage, and so much more.

JM: That was a difficult two-point loss to Purdue on Saturday. What was the atmosphere like around the program after suffering a tough defeat?

Jaelyn Duncan: Everybody was hurting. That’s the way it’s supposed to be after a tough loss. We have to get back in the lab and work to improve. We’re learning from that loss as we speak. We want to make sure something like that never happens again.

JM: You’re 4-2 and it’s a good start to the season. Maryland is entering a tough stretch on the schedule. You’ll be playing against Penn State and Ohio State in back-to-back weeks in November. How can you prepare for such outings?

Jaelyn Duncan: We look at every team the same way. We practice and prepare the same way. We don’t get ahead of ourselves. We’re always a work in progress and we work hard to stay on the correct path. We don’t want to change something up just because the opponent is different or whatever. We don’t pay attention to all that. We just continue working hard.

We’re going to practice hard to perfect our techniques. We’re in our playbook and we stay studying. We’ll be fine. I don’t think we should change the way we practice or change our approach because of the opponent. Everything should stay the same. We just have to keep working and doing what we do best.

JM: What would you say is the biggest difference in your game from last season to this year?

Jaelyn Duncan: The main difference in my game from last season to this season is that I feel like I’ve improved on my techniques. I’m a better pass protector. I’ve improved in the run game as well. My knowledge of the game has definitely improved. I can read defenses at a higher level now. I can identify blitzes and read keys from the defensive linemen.

JM: You have terrific size for the position. You’re listed at 6-foot-6 and 315 pounds. How do you utilize your size to your advantage on a snap-by-snap basis?

Jaelyn Duncan: I try my best to dominate on a play-by-play basis. We’re playing D-I football. Everybody is big and strong. It’s not just me. I try to use my athleticism, abilities, and knowledge of the game to my advantage.

JM: When we turn the tape on, we see a left tackle prospect that possesses the lateral movement necessary to mirror edge rushers. How did you begin developing the athletic traits that make you so effective in pass protection?

Jaelyn Duncan: I train hard every single day. I love perfecting my craft in pass pro. I spend a lot of time practicing my sets, movements, and keys. I’d point to things of that nature. I’m always chasing improvement.

JM: How do you handle speed differently than power in pass pro?

Jaelyn Duncan: If it’s a speed guy, it depends on who it is basically. I spend a lot of time watching film on my opponent throughout the week. If he’s a speed guy, you might set vertically and meet him at his spot. You can’t really open up your hips because that’s when you lose the battle against a speed guy. You have to get to your spot. Once you beat him to the spot, it becomes a mirroring game at that point.

JM: You talked about studying film. What are some tells you look for pre-snap?

Jaelyn Duncan: I look at the way he’s lined up. What leg is back? What leg is up? I look at his knees. If he’s in a three-point stance, what knee is low to the ground and what not. He might tell you where he’s going pre-snap. You have to read your pre-snap keys. Is he tight or wide to you? If he’s tight to me, I might switch it up and jump-set him. He can’t really beat me with speed at that point if I beat him to the spot or if I get on him right away.

JM: You’ve talked about practicing sets and switching it up. Do you have a preferred pass set?

Jaelyn Duncan: I would single out a simple two vertical, one out of an angle [45-degree set]. Or one vertical, two out [45-degree]. It really depends but I would point to that. I might jump-set every once in a while when it’s called for. I like to switch it up. Other than that, I prefer to stick to the same two sets. You gotta change it up once in a while. You can’t keep doing the same thing out there and risk getting predictable.

Maryland OT Jaelyn Duncan was OT1 on the first edition of the 2022 #TDN100, and @TheJoeMarino explained what about Duncan makes him special 💪⬇️ pic.twitter.com/uNcqbKIyRM

JM: Maryland’s offense is versatile. How do you think playing in this system is helping prepare you for the next level?

JM: Going into a bit more detail, what can you tell me about Maryland’s scheme and what your coaches ask of you?

Jaelyn Duncan: That’s a great question. We run a very balanced offense. We do a little bit of everything. We call a lot of passes, runs, and RPOs. We try to maintain a 50-50 even balance. If you look at it, we take a very balanced approach. We’d love to stay 50-50 on a weekly basis.

JM: You’ve showcased the ability to reach the second level as a run blocker. Maryland asks you to pull and work as a lead blocker. What do you enjoy about run blocking?

Jaelyn Duncan: I enjoy pulling (laughs). It allows me to showcase my athleticism. It shows how much faster I am than my opponent, how quick I am with my feet. I can run around and reach the other side before my opponent. I reach my spots. I can climb to the second level. I love running around out there and making my blocks. I love hitting people (laughs).

Jaelyn Duncan: Playing for coach Locksley is a great experience. He’s a terrific head coach. He pushes us to be great. He doesn’t expect anything less out of us. He expects us to be great. We love going to practice every day with him as our head coach. He preaches hard work every single day. It makes me work harder. Nothing is given to us. He doesn’t care about your status as a recruit or whatever. We have to earn everything around here. You can’t come here and think you’re going to play because of your name. You have to really buy into what he’s preaching.

JM: He’s proven that. Would you say your game is more developed in pass protection, or as a run blocker at this point in time?

JM: You frustrate a lot of defensive linemen in pass protection. What have you identified in run blocking that requires improving?

Jaelyn Duncan: I want to become a more dominant run blocker. I think I cover guys up well enough but I’m still working on my footwork and hand placement. Achieving that would help me avoid certain predicaments. I want to be able to block moving keys and moving defensive linemen, like stunts, with more efficiency.

JM: Is there an NFL offensive tackle in today’s game that you’d love to sit down with and pick their brain?

Jaelyn Duncan: I’d probably pick Trent Williams from San Francisco or Tyron Smith from Dallas. I like both of those players. I’d love to sit down and have a conversation with them.

JM: Those are terrific choices. What do you feel is the best game you’ve played in a Maryland jersey up until this point and why?

Jaelyn Duncan: I would probably say the Michigan game from last season. I think I played a great game. A lot of people were talking about Aidan Hutchinson and David Ojabo. A lot of people were doubting Maryland’s offensive line. They didn’t think we could rise up to that challenge. I felt like we went out there and played our butts off. We showed everybody that we could be great.

JM: You were terrific in that game. You actually didn’t start playing football until 14 years old. What was the main reason behind the late start?

Jaelyn Duncan: My family didn’t have a lot of money growing up. I couldn’t play sports like that until the age of 14. We simply couldn’t afford it. That’s why I didn’t play any organized sports really. We had some unfortunate family events as well. It was tough. I eventually found myself in a position to start playing football. I haven’t looked back since.

JM: You’re playing your butt off. We’re excited to monitor your progress throughout the rest of the season. I’ve appreciated your time today. In closing, what are Jaelyn Duncan’s goals for the remainder of the 2022 campaign?

Jaelyn Duncan: I’m going to keep playing my butt off as you said (laughs). I want to improve every single day, every week at practice. I’m going to keep fighting. I love going out there and having fun with my brothers.