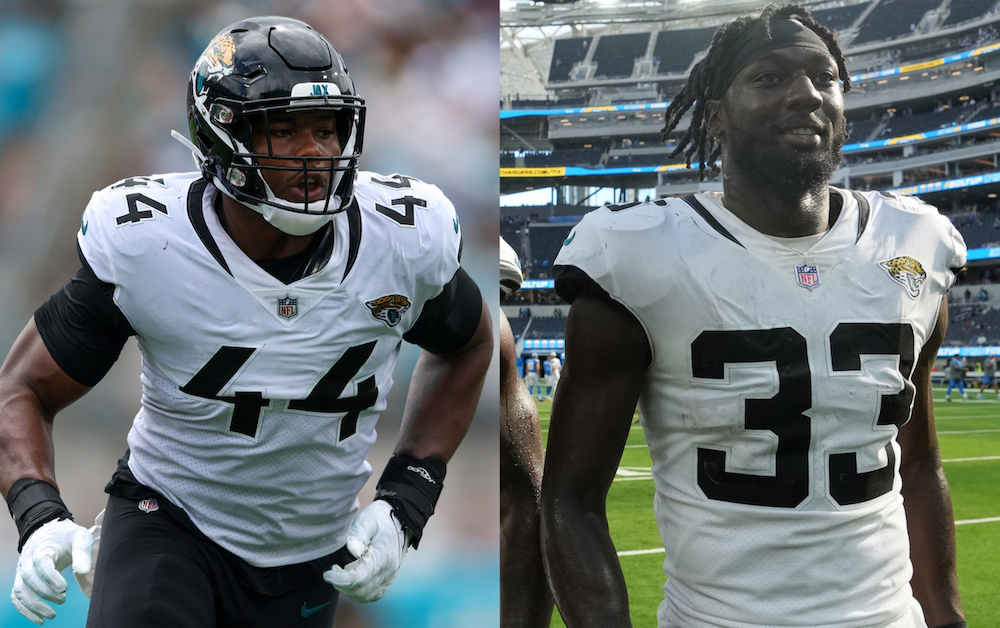 2 Rookies Making Name For Themselves On Jaguars Defense

The most stunning Week 3 result occurred when the Jacksonville Jaguars waltzed into SoFi Stadium and brushed the Los Angeles Chargers aside by a final score of 38-10. Jacksonville’s defense absolutely dominated a perceived Super Bowl-contending Chargers squad. This Jaguars defense may be the league’s most surprising unit through three contests.

Rookies Travon Walker and Devin Lloyd are spearheading these standout defensive performances. The No. 1 overall selection in the 2022 NFL Draft, Walker has lived up to his billing thus far. Considered a high-risk, high-reward pick, Walker looks capable of reaching the ceiling that convinced Jaguars general manager Trent Baalke to roll the dice on his upside. Walker has recorded seven pressures, five hurries, four total stops, one sack, and one interception, via Pro Football Focus.

An athletic rarity, Walker is a versatile 275-pound defensive lineman that can rush the passer, stuff the run, and drop in coverage. Walker has already flashed in all three areas. The Jaguars likely don’t regret drafting Walker over Aidan Hutchinson, who has impressed for the Detroit Lions in his own right. Hutchinson was a more pro-ready prospect, but Walker’s freakish athletic tools appear primed to make the appropriate transition to the NFL level.

Lloyd is also an elite run defender, earning an 88.5 run defense grade from Pro Football Focus through three showings. Lloyd’s 78.2 overall grade makes him PFF’s highest-rated defender among all qualifying rookies (75 minimum snaps). Opposing quarterbacks own a passer rating of 50.0 when targeting Lloyd in coverage. Lloyd has been excellent against both the run and pass.

Sunday’s performance wasn’t a fluke. Jacksonville’s swarming defense held the Chargers to just 5-of-13 (38.4%) on third down conversions. A desperate Chargers squad also went 0-for-2 on fourth down attempts. The Chargers managed just 26 rushing yards and 312 total net yards. Justin Herbert threw an interception and also lost a fumble. Austin Ekeler was a non-factor. It was an appropriate follow-up to the dismantling we witnessed against Indianapolis in Week 2. Jacksonville deserves all the credit.

The Jaguars have posted elite defensive numbers over the previous two contests, including the aforementioned 24-0 shutout win over Indianapolis. In consecutive victories, the Jaguars have allowed an average of 5.0 points per contest. The Colts and Chargers combined to go 7-of-23 (30.4%) on third down. Jacksonville held both squads to 0-for-4 (0-for-2 each) on fourth down attempts. Both opposing offenses gained an average of 265 net yards per game. Jonathan Taylor was held to 54 rushing yards as Jacksonville’s run defense is currently allowing a league-low 55.0 yards per contest. Jacksonville also forced five turnovers and sacked the opposing quarterback on six occasions in their latest two contests. They’re a league-leading +7 in the turnover department via a league-high six interceptions and eight total turnovers.

Several additional Jaguars defenders are playing the best football of their lives. EDGE Josh Allen leads the league in pressures with 16, and has already recorded eight hurries, six hits, and 2.0 sacks. Allen generated a career-high eight pressures in Week 3, leading a Jaguars pass rush that pressured Herbert on 30.4% of his dropbacks, via Next Gen Stats. Folorunso Fatukasi and Davon Hamilton have formed a fearsome interior duo. Tyson Campbell is developing into an impressive boundary cover-man. Everyone is eating in defensive coordinator Mike Caldwell’s defense.

Baalke entered the offseason requiring a difference-making period in order to secure his future. Baalke’s track record is extremely spotty dating back to a tumultuous period in San Francisco, but Baalke appears to have enjoyed an excellent offseason in the talent acquisition department. Drafting Walker and Lloyd were the highlights. Once again, credit where credit is due.