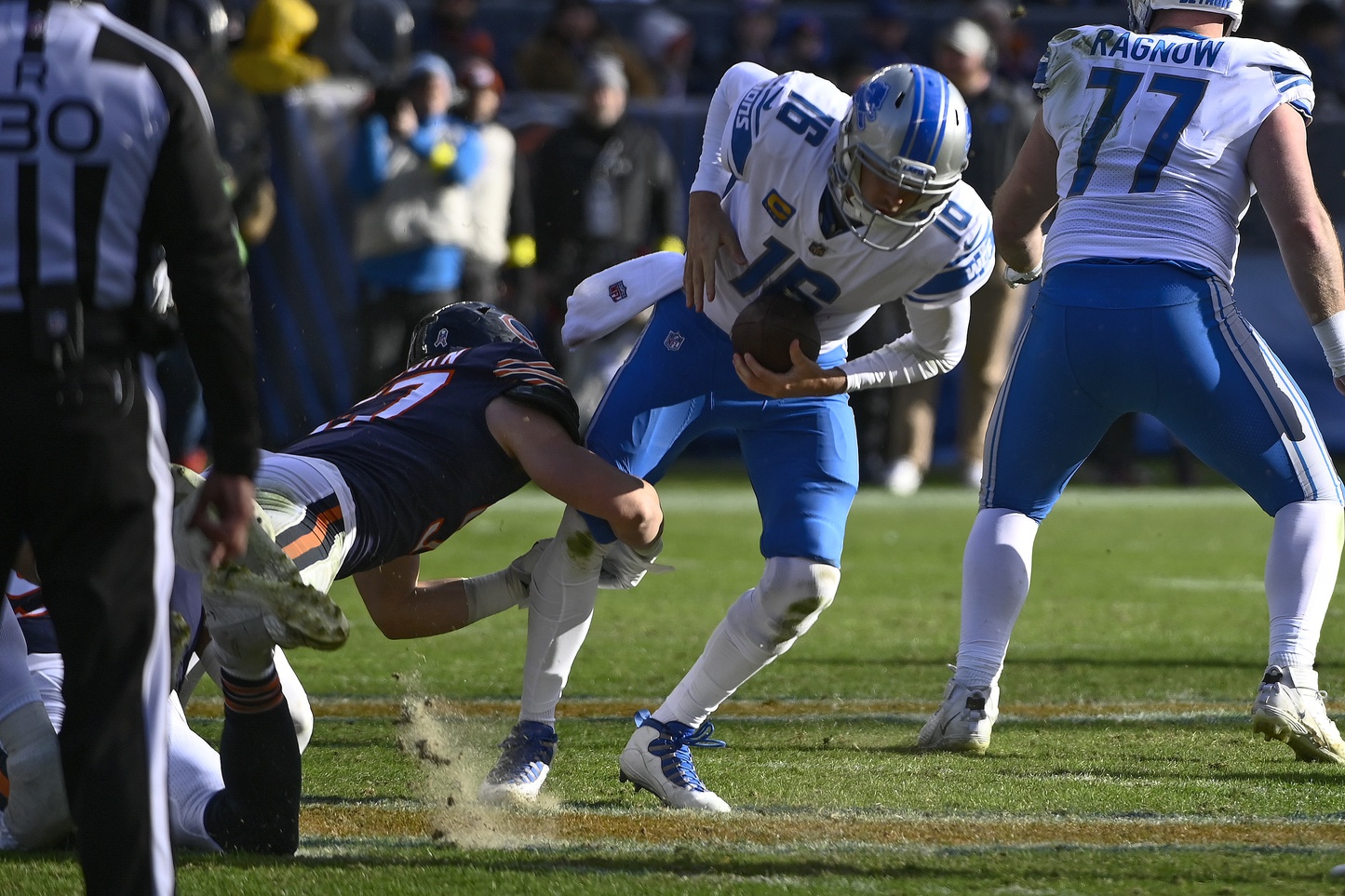 One of the biggest surprises of the 2022 NFL Draft was linebacker Jack Sanborn falling out of the draft without a new team. A talented defensive playmaker with high football IQ, effective tackling ability, and versatile upside as a special teams contributor, Sanborn is seeing an increased role with the Chicago Bears as a UDFA and is starting to show the 31 teams that didn’t sign or draft him that they made a mistake.

Before the regular season even began, Sanborn was making himself known as a potential rookie standout for Chicago in the preseason. In his NFL preseason debut, the rookie linebacker tallied his first interception and fumble recovery for the team he grew up watching. But with some talented, more veteran linebackers on the depth chart in front of him, Sanborn didn’t immediately get his chance to shine. For the first seven weeks of the season, Sanborn’s only contribution to the Bears came on special teams, where he played at least 60% of all snaps. Then, a couple of days before the trade deadline, Sanborn was on the field for 13 snaps in the Bears’ Week 8 matchup with the Dallas Cowboys.

One day later, the Bears traded fellow linebacker Roquan Smith to the Baltimore Ravens. As a result, Sanborn has seen an increased role as a new starter for the Chicago defense in the two weeks since then, and he’s already starting to shine with the higher snap count.

On the Miami Dolphins’ first play from scrimmage in Week 9, Sanborn got his first snap as the starting middle linebacker for his hometown team and made the tackle on running back Raheem Mostert. By the end of that game, he was tied with fellow rookie Kyler Gordon for the team lead with seven solo tackles against Miami.

He made some nice plays all game both in coverage and against the run to limit the Dolphins offensively when was the one to step up and make a play. But his performance against Miami paled in comparison to the coming out party that was this Sunday’s game against the Lions.

If Sanborn’s Week 9 performance against the Dolphins was just a small taste of what he could do, his Week 10 showing against Detroit was the full meal.

The undrafted free agent rookie was everywhere on defense for the Bears, once again leading the team with nine solo tackles (and 12 total). Most impressively, he recorded two sacks in his second career start, one of which prevented an early rushing touchdown on a Jared Goff scramble and another that led to a 3rd-and-long for the Lions, who were forced to punt one play later.

.@JackSanborn79 gets to Goff ‼️

Both plays give a good sense of how great Sanborn’s competitive toughness is along with an impressive lack of uncertainty for a rookie. There was no hesitation in chasing down Goff as he started to scramble after a play-action rollout to his left. A single moment of uncertainty likely would have allowed an easy rushing touchdown and a lost lead for Chicago. His second sack was similar, shoving his way past the right guard on a blitz, wrapping up the quarterback as he stepped up in the pocket, and rolling through the tackle to make sure Goff went down.

Sanborn’s best play of the game might have been his interception that was eventually wiped away thanks to another defender’s hands-to-the-face penalty. He made a nice drop back in coverage, read Goff’s eyes, and got just enough extra depth to make a leaping play on the ball after it was thrown. Though it didn’t end up counting, that is a huge play to make—one that really could and should have sealed the game for the Bears—for the rookie linebacker in the red zone. It’s a play that showed off his abilities in pass coverage to pair with the strengths as a run defender and pass rusher he displayed throughout the game.

This was called back due to a penalty, but again, Jack Sanborn!

This looked a lot like a certain number 54 who played in navy and orange. pic.twitter.com/7bA2KrAa3n

After trading away Smith at the deadline, Chicago can rest easy knowing its homegrown talent can do and has done a good job filling in. Sanborn has always had good upside with his solid set of skills and finally is able to show everything off as his role in the Bears’ defense increases. He may have “only” been an undrafted free agent, but don’t count Sanborn out as a big part of this new Bears regime’s vision for the future of their defense.

This is a test.