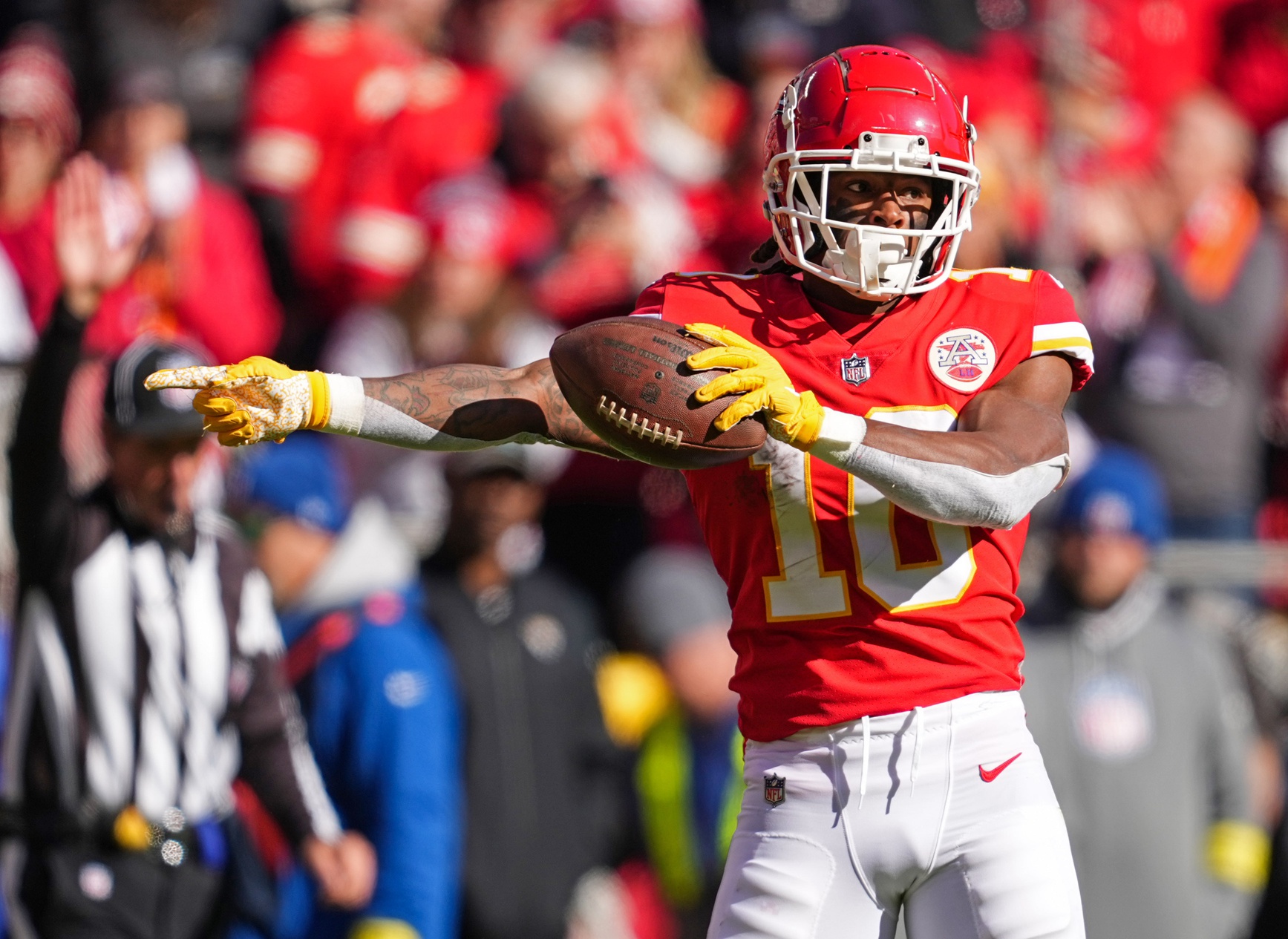 Kansas City Chiefs rookie seventh-round rookie running back Isiah Pacheco appears to have earned Andy Reid and his coaching staff’s trust to play a significant role in the backfield for the league’s highest-scoring offense as the season approaches the stretch run.

Pacheco’s emergence as the Chiefs’ lead running back provides further evidence of how continuously impressive he has been since arriving in Kansas City.

Pacheco came with low draft pedigree. As the 251st overall pick, he was not a lock to make Kansas City’s roster at the outset of training camp. However, his impressive performance and special teams prowess earned him first-team reps throughout camp. This enabled him to jump free-agent acquisition Ronald Jones and holdover Derrick Gore (since released) on the team’s depth chart.

Pacheco’s performance during training camp offered hope that he would play a prominent role in Kansas City’s backfield come the regular season. For the first six weeks of the season, that hope did not come to fruition. Kansas City began the season featuring former first-round pick Clyde Edwards-Helaire and pass-catching specialist Jerick McKinnon in the backfield. It worked. Edwards-Helaire ran 59 times for 256 yards (4.34 yards per carry), adding 137 more through the air on 16 catches over the first six weeks of the season, with five touchdowns. McKinnon added 107 yards on the ground on 27 carries (3.96 yards per carry) and 80 yards on 11 receptions through the air, with one touchdown. Kansas City’s offense thrived, averaging 29.8 points per game. They didn’t need to change a thing.

Pacheco’s action through that point in the season had mainly come in mop-up duty, with the exception of Kansas City’s Week 4 win over Tampa Bay. In that game, Pacheco flashed some of the impressive burst that made him stand out during camp, rushing for 63 yards on 11 carries. In hindsight, that game, and the two that followed it, may have been what spelled doom for Edwards-Helaire. In Weeks 5 and 6, Edwards-Helaire managed only 48 yards on 18 carries, a 2.67 yards per attempt figure.

Before the Chiefs’ Week 7 contest against the San Francisco 49ers, NFL Media’s Ian Rapoport reported that Pacheco would start over Edwards-Helaire. That game did not bear out Kansas City’s backfield transformation; Pacheco took 19 snaps to Edwards-Helaire’s 17 (McKinnon led the way with 28, as Kansas City overwhelmed the 49ers with a pass-heavy approach). It, and Rapoport’s report, were a harbinger for what was to come.

After an odd Week 9 game coming off their bye week in which Kansas City mostly played from behind against Tennessee and was forced to feature McKinnon, their plans to start Pacheco became something more than nominal in their Week 10 victory over the Jacksonville Jaguars. Pacheco led Kansas City’s backfield with 35 snaps, followed by 23 from McKinnon and four (4!) from Edwards-Helaire.

Maybe the most important, or telling, play of Pacheco’s season came with 9:04 left in the first quarter of that Week 1- game against the Jaguars. Pacheco ran up the middle for four yards. He fumbled, and Jacksonville recovered. Given Pacheco’s tenuous role in Kansas City’s backfield (he hadn’t even led the backfield in snaps since being named the nominal starter), it would not have been a surprise to see the Kansas City coaching staff turn towards McKinnon and Edwards-Helaire for the rest of the game.

Instead, they leaned on Pacheco. On Kansas City’s next play from scrimmage, he took a carry off the right end for 13 yards. Pacheco finished the game with 16 carries for 82 yards, his 16 carries representing the second most from a Chiefs running back all season.

In other ways, Pacheco’s emergence is shocking. Kansas City did not need to give any kind of role to Pacheco. He was a seventh-round pick and their offense had been mowing down teams before Rapoport reported they would start the rookie over Edwards-Helaire. Edwards-Helaire also has significant draft pedigree from this regime; he was a first-round pick just two years ago. Many coaching staffs would stick to the player they selected highly in the draft, especially when their offense is humming the way Kansas City’s was. The fact the Chiefs tinkered with their backfield and did not let “good enough” (which was arguably the best offense in the NFL, already) get in the way of potential improvement, especially at the cost of admitting a mistake in drafting Edwards-Helaire, is a credit to their coaching staff.

Pacheco’s growth in Kansas City should be taken within the context of the role he plays. Pacheco does not lead Kansas City’s backfield; no one does. This has helped him grow into a role the coaching staff feels comfortable playing him in. McKinnon’s emergence as Kansas City’s pass-catching back, which dates back to last season’s playoffs, means that one week he may be playing 70% of the offensive snaps. The next week, that player may be Pacheco. The players may split snaps more evenly another week. Snap share in Kansas City’s backfield depends on game script.

Terms like “starter” are misleading. They are so misleading, in fact, that the “starter” in Kansas City’s backfield will probably not even play in their highest leverage moments. Jerick McKinnon remains Kansas City’s go-to running back in passing situations. He will be the player flanking Mahomes when Kansas City needs a first down on 3rd-and-8. He will probably lead the backfield in snaps for a few more games this year, as he did in Weeks 7 and 9 after Pacheco was named the starter. But Pacheco will play a role in this backfield for the rest of the season. That in and of itself is remarkable for the 251st overall pick on the best offense in the NFL.