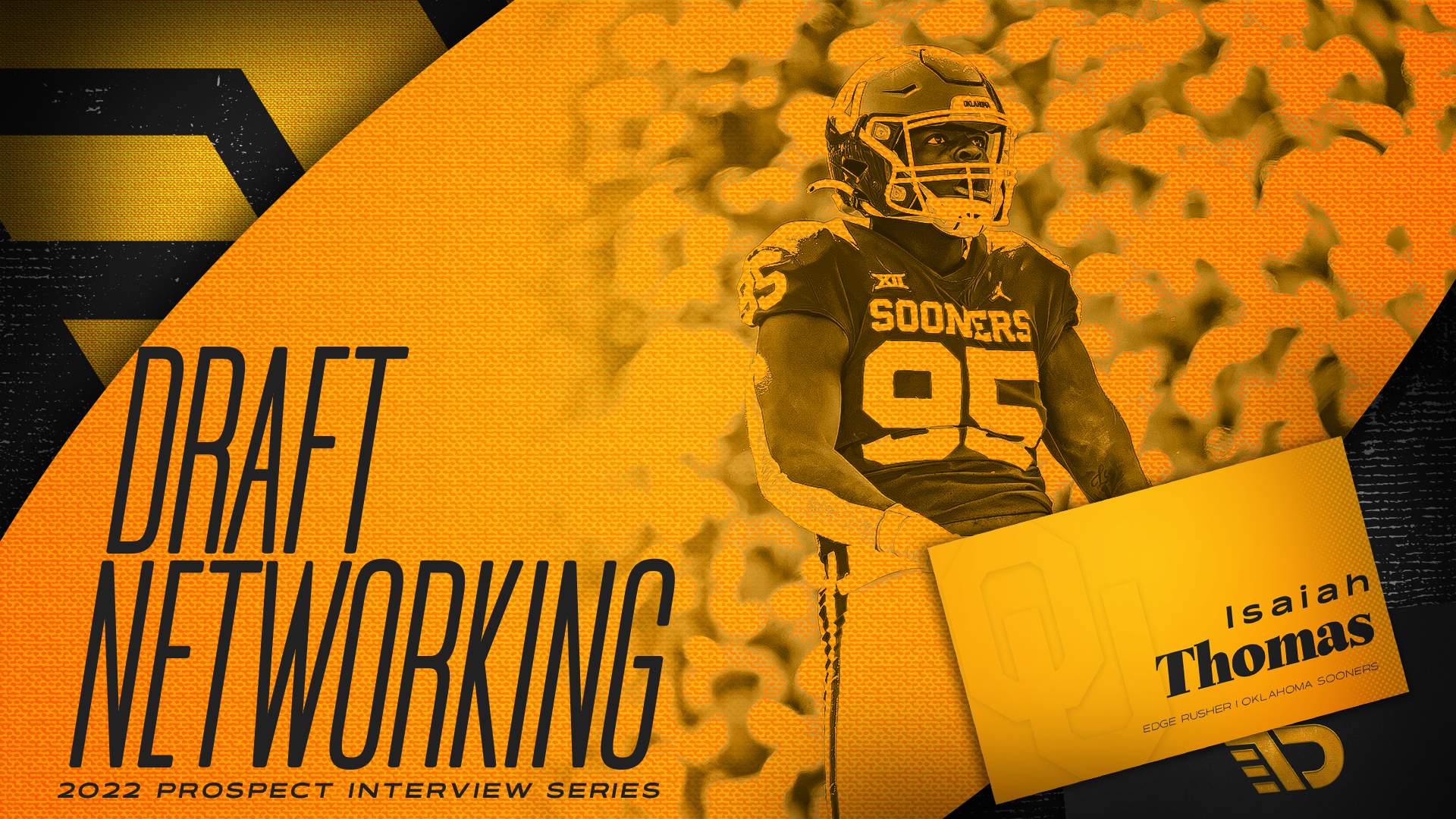 Oklahoma’s Isaiah Thomas is one of the most intriguing EDGE defenders available in the 2022 NFL Draft. For whatever reason, Thomas is flying under the radar and deserves more of your undivided attention.

The Tulsa, Oklahoma native consistently flashed at the Senior Bowl in January. Thomas is a long and rangy defensive end that enjoyed an incredible and underrated NFL Scouting Combine. Firstly, the measurements are off the charts. Thomas is 6-foot-5 and 266 pounds with arms longer than 33 inches and hands larger than 10 inches. Those are rare numbers.

Thomas then became just one of two 265-plus-pound defensive linemen to run the 40-yard dash in 4.7 seconds or less. The other? Georgia’s Travon Walker, who’s receiving top-five buzz. Thomas, who recorded 14.5 sacks over his previous two campaigns at Oklahoma, also leaped an impressive 117-inch broad jump.

Thomas recently spoke exclusively with The Draft Network regarding his excellent combine performance and experience, his exciting and rare pass rush arsenal, which teams he’s met with throughout the process, and so much more.

IT: Like you said, I believe I had success throughout my final season. It was bittersweet in a sense. Bitter because we didn’t reach our goal by qualifying for the playoffs. We wanted to win a National Championship. It was also sweet because I finished on a high note with a successful final season as a leader and team captain. I developed my career and took steps forward as a high-level collegiate athlete. I earned invites to the Senior Bowl and NFL Scouting Combine. I really appreciate the final season I had with my teammates.

JM: You certainly did. You recorded 14.5 sacks across your final two campaigns. Tell me about your pass rush arsenal. I’m looking for go-to moves, counters, and so on.

IT: I’m a bigger defensive end, a big and strong defensive end. I like to start my game off with a little power. I can start with some iteration of a bull rush or the long-arm. That allows me to put the offensive linemen on his heels. As the game goes by, I might switch it up and do a little stab-club. I love showing some hands with a side-swipe. I can throw a counter in there. I definitely enjoy starting with power and keeping opposing offensive linemen on their heels. I keep them guessing after that. My pass rush arsenal blended well with Perrion Winfrey on the inside and Nik Bonitto on the edge.

JM: The three of you created a ton of havoc and the tape proves that. You’re always full of energy on tape. You’re constantly chasing down plays and showcasing terrific effort. How did you develop that mentality?

IT: Our defensive coordinator, coach Alex Grinch always preached our effort and the “want to” run to the ball. He always told us if we did one thing right, it better be running to the ball (laughs). It came from coach Grinch, and the defensive line coaches would pass that message on. If you ever mess up, mess up going 100%. In certain situations, I had reps that weren’t perfect. It can’t always be perfect from start to finish and that’s why we practice our craft every single day. I didn’t make a WOW play on every single snap, but I did flash 100% effort on every single play. That shows a lot.

You can’t win every single rep on the field. You want to, you try to, but it’s just not realistic. I’m always in control of my effort. If you display that effort, you can look like you won that rep. I always went the hardest and fastest. I learned that attitude from my coaches at Oklahoma.

JM: I love your effort and hustle. You played a bit of a unique role in Oklahoma’s defense, playing some five and three-technique. You rarely settled into one spot and you could play outside more consistently at the next level. How does all of that impact your pro projection?

IT: I think all of those things have a tremendous impact on my pro projection. My coaches always told me to add value to myself by doing more than what your role calls for. Like you said, I was all over the place from a hustle and effort standpoint. I played both defensive tackle and defensive end. I even played the nose guard in our subpackages (laughs).

My experiences definitely helped me a lot and I showed that at the Senior Bowl by playing some defensive tackle there. I feel like I’m versatile enough to play multiple roles at the next level. That helps me a lot. I can play on the EDGE and kick inside in subpackages. I definitely give the credit to my coaches for that.

I have to pat myself on the back a little bit too because I knew our playbook and I studied the film. I mastered those things and I was physically capable of lining up anywhere. I’ve definitely displayed my versatility while proving I’m one of the better defenders in this draft.

IT: I definitely feel like my performance flew under the radar. You mentioned Travon Walker. At the combine, most things are done in alphabetical order by last time, so I was often lined up awfully close to him. Travon and I were close together throughout most of the combine. I got to know him well.

Seeing the numbers he put up and then witnessing myself put up similar numbers, we essentially ran a similar 40 at the same size, being just one of two, it definitely flew under the radar. Talking to NFL coaches before the combine, some of them were asking me what I thought I was going to run in the 40. I told everybody I was going to run a 4.72 or faster, and they all acted kind of surprised.

Several coaches told me they had me down as a 4.8 guy and I said no way (laughs). I put on a great performance and I definitely surprised the coaches in attendance, specifically in the 40. It makes me feel like I should be getting more credit, hype, and buzz around social media. It is what it is though.

JM: We’re in agreement there. You also had excellent measurements at the combine. Your official numbers included arms longer than 33 inches and hands larger than 10 inches. How do you use those assets as a pass rusher?

IT: I use my hands and my arms to protect my chest. Our coaches always used to tell us to protect our numbers, protect the middle of your chest. We didn’t want the offensive linemen to get their hands on our chest. I had to get my hands in there before they reached me.

With me having big hands and long arms, that’s why I told you earlier that I use my long-arm to get my hands in there first. I use my length to my advantage. When I’m going against an offensive guard, I know I’m quicker and longer than he is. I can flash that club move. I definitely know how to use my measurements to my advantage in every aspect.

JM: It’s so important and I love the way you utilize your God-given abilities. Have you completed any virtual or in-person top-30 visits, and do you have any more coming up?

IT: The Cincinnati Bengals are supposed to travel down here to visit me shortly. We had to reschedule but they’ll be down here shortly. I’ve had several virtual visits through Zoom. I worked out for the Dallas Cowboys. I met with the Denver Broncos, Buffalo Bills, New York Giants, and Dallas Cowboys for a second time via Zoom.

JM: There’s a lot of interest in you and it’s easy to see why. Who are some of the best offensive tackles you’ve ever played or practiced against?

IT: I can definitely tell you the best ones I’ve ever practiced against (laughs). I can’t recall a ton of opposing players, but Teven Jenkins from Oklahoma State definitely stands out. He was pretty good. I played against Connor Williams when he was at Texas. I believe he’s playing guard now. He began his career with the Dallas Cowboys and I believe he’s with the Miami Dolphins now. He was pretty good as well.

JM: That’s one hell of a physically imposing player you got to see in practice every day. If you could pick the brain of any EDGE rusher in today’s NFL, who would you choose and why?

IT: I’d probably say Cameron Jordan. For one, we’re signed to the same agency and my representation knows him very well. We talk about him a lot. They’ve compared me to him. Cameron Jordan also plays inside and outside a lot. He’s primarily an EDGE just like I am, but you’ve seen him line up as a three-technique in certain situations. He’s extremely disruptive no matter where he lines up. I would pick him because we have similar frames, although he’s a little heavier than I am. I would love to discuss his approach to the game as both an inside and outside defender. I would love to ask him “why” and how he’s had the success he’s had.

JM: That’s a terrific choice and I hope you get that opportunity. I’ve really appreciated your time today. I feel like this conversation has highlighted why you’re one of the most exciting and intriguing EDGE defenders in the 2022 NFL Draft. In closing, what kind of impact is Isaiah Thomas going to make at the next level?

IT: I’m definitely going to be an effective player that makes an instant impact for whoever drafts me. You’ve said it throughout this conversation. I don’t have the hype or the buzz I feel like I rightfully deserve. When a team drafts me, they’re going to get a well-coached player that’s extremely coachable moving forward. I’m responsible and I understand how to respond to adversity. I don’t back down from the challenge. I love being coached. I’m a resilient guy. I’m really looking forward to playing for whoever drafts me. They’re going to be one lucky team.