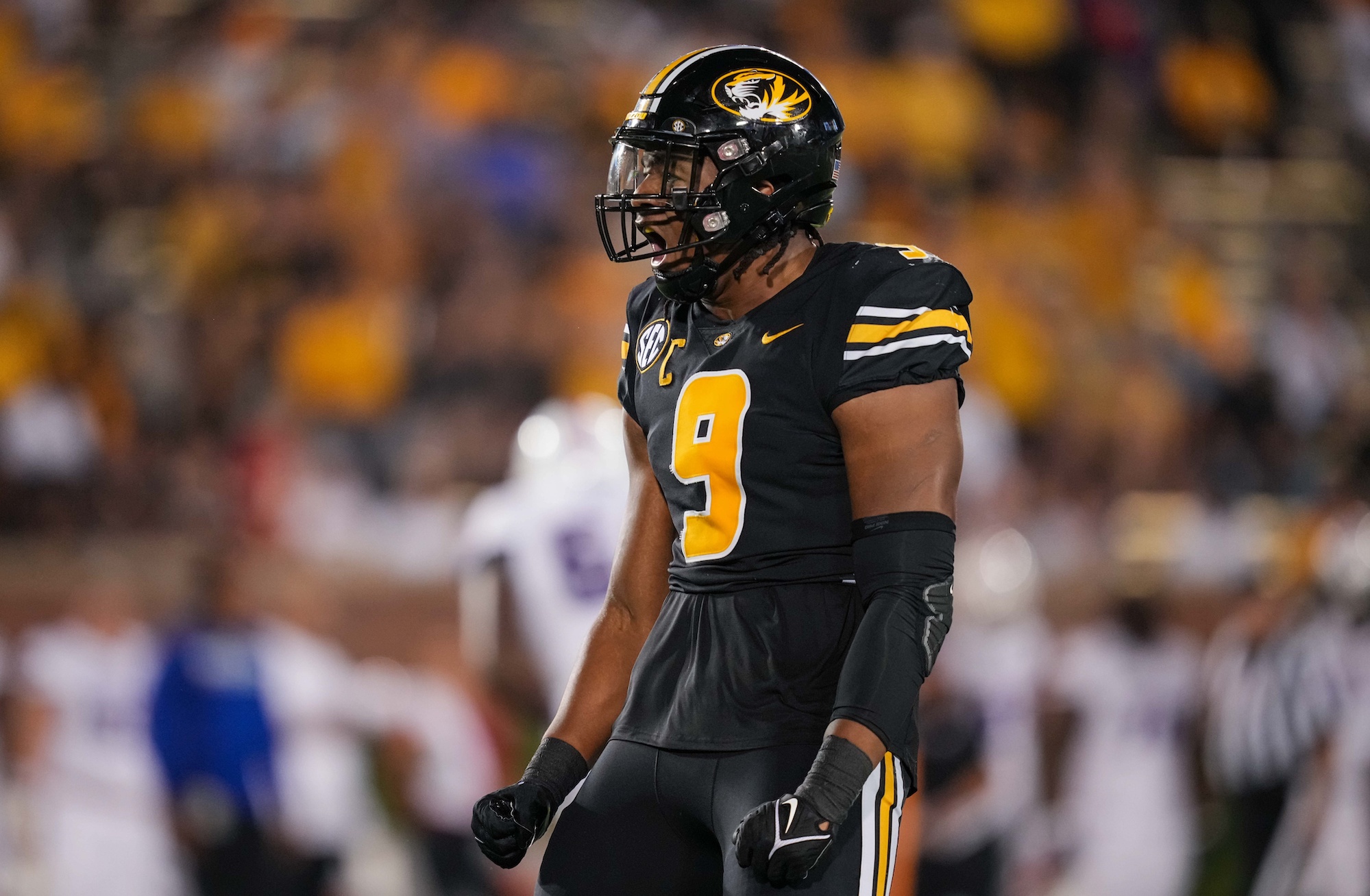 Why Isaiah McGuire Deserved To Be In TDN100

There are some loaded position groups in the 2023 NFL Draft and the edge rushers have a strong claim to be among the deepest. In fact, there are 17 edge rushers in our latest TDN100 update. Among those 17, 13 were consensus selections from our scouting department. For our next update, I’m hopeful to see Missouri’s Isaiah McGuire as a consensus selection or at a minimum, me not being the only member of the staff to include him on a ballot.

A 30-game starter at Missouri, McGuire’s production ramped up over the last two seasons where he racked up 28 tackles for loss, 14.5 sacks, and forced three fumbles while competing in the SEC. McGuire checks so many boxes we look for in edge rushers. Listed at 6-foot-4 and 275 pounds, McGuire has ideal size and good length. He offers an appealing blend of athleticism, flexibility, power, and a motor that always runs hot to go with his frame.

As a pass rusher, McGuire has a quick first step, active hands to soften angles, and the flexibility needed to flatten and corner edges. I like his feel for rush angles and utilizing effective footwork to complement his overall rush plan.

Missouri’s Isaiah McGuire is one of the most underrated prospects in the 2023 #NFLDraft and should do a ton to help his stock at the @seniorbowl.

Beats the left tackle here with a forklift-rip for the sack. So powerful and violent with his hands. pic.twitter.com/IaPAcAWzai

McGuire is also an effective run defender, where his ability to process, respond, play with leverage, set the edge, disengage, and finish all shine. He doesn’t easily concede ground while maintaining his run fits with a strong ability to locate the football.

Isaiah McGuire has put together one heck of a season for #Mizzou. pic.twitter.com/pKoApoQYWm

It’s not hard to see McGuire’s ability as a pass rusher and run defender and how it translates to the next level, but I also love his versatility and how that pairs with his balanced skill set. He projects well to playing defensive end in even-front looks, but he also offers appeal as a 3-4 outside linebacker where he has the athleticism and processing skills to serve in that role. McGuire represents an option for all defenses which only helps his valuation.

I also love that McGuire doesn’t appear close to being maxed out. With added functional strength, his bull rush can be even more effective to build out his overall rush repertoire as a compression-style rusher that still offers flexibility. He can also learn to play with better control so that he can more consistently finish behind the line of scrimmage. When watching his film, there are instances where he misses an opportunity to complete a tackle because he comes in too hot and without enough balance and he comes up empty. Those are all improvable components of his game that will help him take a step forward.

While McGuire proved himself in the most talented conference in college football, he’ll get another chance to showcase his talent competing against the best of the best at the Senior Bowl. I have a feeling he’ll go from “under-discussed” to being a favorite day-two prospect among evaluators who gain meaningful exposure to his ability. From there, it won’t take long to confirm what he did at Missouri and realize he deserves to be slotted higher on the board.