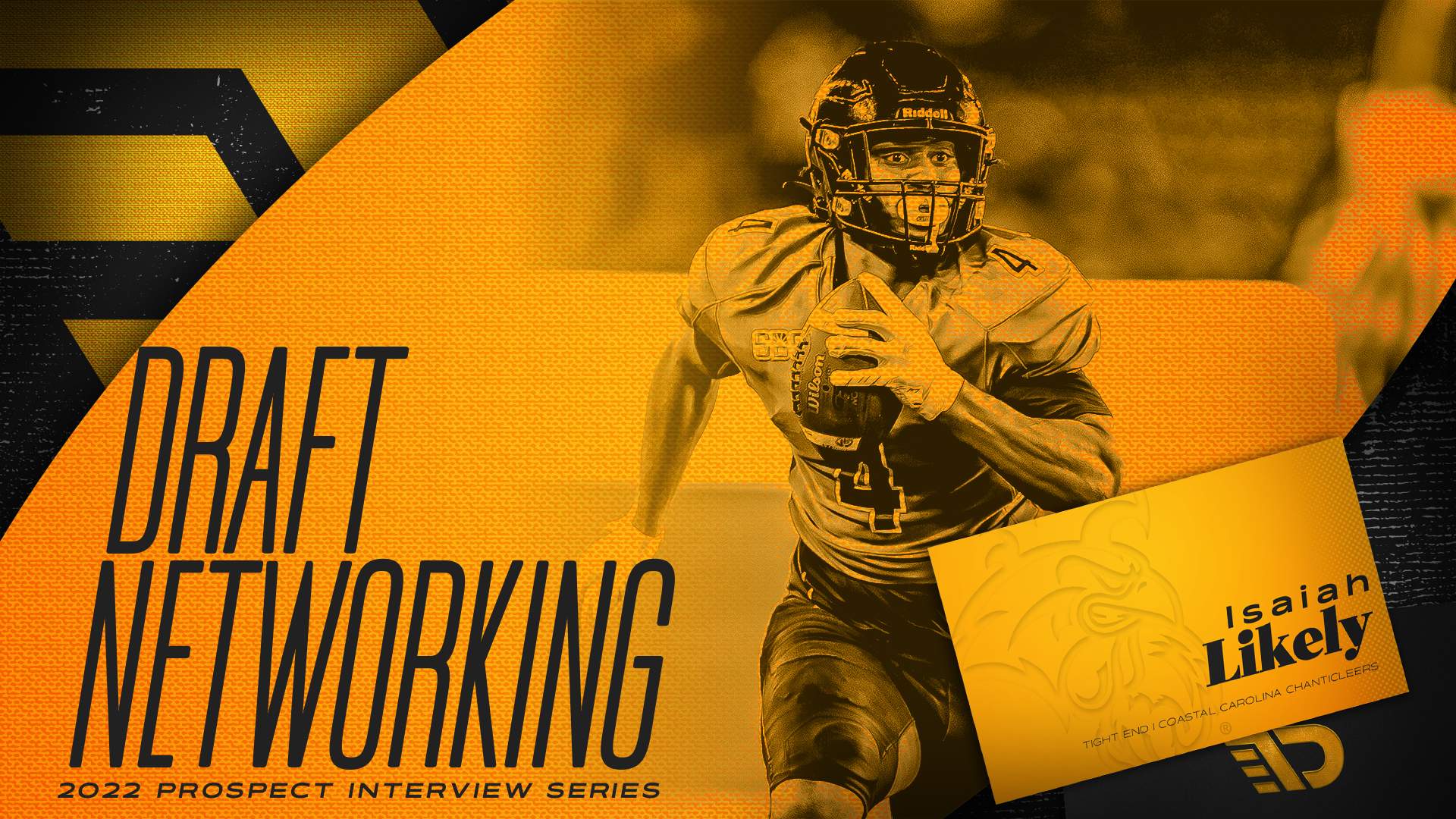 The 2022 NFL Draft class of tight end prospects is extremely deep and talented and Coastal Carolina’s Isaiah Likely is one of the most impressive athletes available. Likely was far and away the biggest threat the Chanticleers posed on offense on a weekly basis.

The Cambridge, Massachusetts native exploded in 2021 to record a career-high 59 receptions, 912 receiving yards, and a staggering team-high 12 touchdowns. Likely was a big play waiting to happen that averaged 15.5 yards per reception.

Likely recently spoke exclusively with The Draft Network regarding his upbringing in Cambridge, Massachusetts, what he learned about himself at this year’s Senior Bowl, his favorite routes to run, debunking the small school narrative, his overall athletic profile, which teams have shown interest in him throughout the process, and so much more.

JM: Conway, South Carolina is a long way from your hometown of Cambridge, Massachusetts. Those two places couldn’t be any more different in my opinion. I’m curious if you experienced any culture shock when you first arrived at Coastal Carolina.

IL: The southern way of living definitely took me by surprise. I grew up in a big city. I was used to seeing a lot of streetlights, traffic lights, and stop signs. When you come to the south, there’s nothing but land everywhere (laughs). It’s definitely a different way of living. That’s something that for sure took me by shock.

JM: You found a way to fit in, though. You did a lot of heavy lifting for the program this past season, having recorded an impressive line of 59-912-12 in 13 appearances. How do you think carrying that workload helped prepare you for the next level?

IL: It really did prepare me for the next level. My game is centered around being the most versatile player on the field. To be able to play the X position, in the slot, in-line, or wherever they needed me, it made me that movable chess piece that a lot of teams desire at the next level. It made me somewhat of that hybrid tight end.

JM: Your big-play ability really popped. You averaged an astounding 15.4 yards per reception in four strong seasons. That’s not just one season, that’s your career average. What is it about your game that allows you to create so many explosive plays in the passing game?

IL: I have a high football I.Q. I was consistently able to identify defensive coverages, and I understood how to take advantage of how they were lining up. I understood where they lacked help. I was always in the film room, whether that was with my coaches asking questions, or putting in extra work by myself.

I used to watch film with my quarterback Grayson McCall. I’m a film guru. I love the game not only for what it’s done for me. It goes beyond that. It’s given me an opportunity to highlight what I can do. I put my best foot forward on a snap-by-snap basis. You can turn on the tape from any of my games and you’ll see what you’re going to get from Isaiah Likely as a football player. I was consistent. Not only am I great in the run game, but I’m also a player that can take a five-yard hitch to the house.

JM: The tape speaks for itself. The coaching staff moved you all over the formation and you were excellent at executing everything they put on your plate. You touched on that earlier, but talk to me in detail about some of the positions you played, and what some of your duties were.

IL: I played in-line as a traditional “Y” tight end. I played in the slot. I played the “H” position, or really the “F” as the move tight end, as NFL organizations like to call it. I really played the “X” as well, and to the other side of the field as the “Z.” If I was play-side and had to be a lead blocker in our offense, I was that tight end that was able to do everything for us. Sometimes I would flex out and motion to the opposite side of the formation as a lead blocker on a regular option. I moved around into the slot and created one-v-one mismatches. I played “X” and took advantage of one-v-one coverages. Sometimes we lined up every receiver to the play side and left me isolated on the back side.

Defenses had to decide if they wanted to double bracket me or leave a corner or linebacker on me. Did they want to single cover me? Those were the decisions we forced defenses to make. I was the focal point of the offense and we tried to get me open. We made big-time plays.

JM: It’s so obvious on tape. You had a chance to go through a bit of a different experience when you traveled to Mobile, Alabama for this year’s Senior Bowl. I’m curious what you feel you learned most about your game following the annual all-star event?

IL: I learned that it didn’t matter what level or caliber of competition I played against. I’m going to be the same player regardless. My game is centered around being that unmatched tight end that you can’t account for with a regular safety or linebacker. You have to account for me when I’m on the field. Going to Mobile really showed me that I can handle any level of competition. I went toe-to-toe with some big-school, highly sought-after players. I proved I could do it against anybody in Mobile. I could do it at the Power-5 level. I could do it against the best of the best, which is what I essentially encountered at The Senior Bowl.

JM: You were excellent in Mobile and you answered a lot of questions out there. Do you have a favorite route to run?

IL: I probably ran every route in the book at Coastal Carolina (laughs). I do love a good 10-12 yard option route. That’s definitely one of my favorites. I’d also single out a 10-12 yard corner route, and a 10-12 yard post route. Those are probably my three favorite routes.

That 10-12 yard option route really just gives us receivers room to operate. Whether the defender is head up, inside or outside, he’s never going to be right because we’re in control of the option. It also depends on whether or not you’re the first, second, or third read. Depending on that, you can get out of your breaks early, or you can mess with him a little bit. If you’re the third read, you know you have more time to operate, and you can really give him something at the top of the route. If you’re the first read, you have to be quick and get out of it because the ball is coming your way.

When it comes to that corner route, it becomes a game within the game. If you’re already attacking vertically and he’s already inside leverage, you have a great idea pre-snap that you’ve most likely won the route as long as you can high point and catch the ball. If he’s outside leverage, you just have to be more adaptable. You can give him something at the top of the route, use your hands at the top of the route. Now you just go get the ball.

With that post route, it just showcases my big-play ability. When trying to defend against me on that route, the safety tries to sit on the tight end at the 10-12 yard mark. When you’re dealing with me though, you better be able to really backpedal and understand that if you give me any ground, I’m going to run by you.

JM: I love how in-depth you went there. I want to keep this going a bit longer. What are some of the ways and moves you attempt to create separation?

IL: I love using my head and my hands at the top of my routes. Those are some of the things I pride myself on. I don’t let defenders get their hands on me. I’ve been able to master that art through practice and repetition. Having quick hands, using your hands at the top of the route lets defenders know that they have to be better with their feet when dealing with a tight end like me, because you’re not going to be able to put your hands on me.

Yeah, I’m a big-bodied tight end which obviously means that I’m going to get my body on you if I have to in order to make those dominant catches. I’m also going to let you know that there’s so much more to my game than just having to rely on my frame at the catch point. I have a lot of moves I can work. I can work my hands. I can work my feet. I can dip in and out of my breaks efficiently because I have smooth hips. These are some of the common moves I use throughout my game.

JM: You have such a diverse arsenal. Which teams have you met with throughout the process, either virtually or through Top 30 in-person visits, and do you have any more coming up?

IL: I’ve met with all 32 teams in some capacity between The Senior Bowl, combine, or virtually through Zoom. I had in-person Top 30 visits with the New York Jets, Buffalo Bills, and I just came back from Arizona.

JM: There’s a lot of interest in you and it’s easy to see why. Earlier, you touched on going down to The Senior Bowl and proving that you could handle a step up in competition. You’ve aced this pre-draft process, but it won’t stop some people from calling you a “small-school” prospect. How do you typically respond to that?

IL: I honestly love it. I welcome the opportunity to prove myself at the next level. You’re always going to have to prove yourself to somebody. Football is football at the end of the day. The level you played at only matters so much. The NFL is going to find talent around the world, no matter where it lives. Players from all walks of life currently play in the NFL.

Being labeled as a small-school prospect just shows that I was the best of the best at what I do. The work I put in at the college level, and what I’ve done off the field as well, those things let me know that my game will translate to the next level. Being that small-school kid, I’m used to having to show people why I’m different.

Being able to stand out on film throughout my career, and then for me to go down to The Senior Bowl and achieve that same success showed that you can’t define me by the competition I played against at Coastal. That doesn’t stop me from being able to make those big-time plays against any defender at any level.

JM: That’s the best way to address that question. I’ve really appreciated your time today. I feel like this conversation has highlighted why Isaiah Likely has a chance to develop into the best, and most dangerous tight end in the 2022 NFL Draft. What kind of impact is Isaiah Likely going to make at the next level?

You’re going to get somebody that understands how to approach his teammates in the desired manners. I’m a people person that understands you can’t talk to everybody the same way. Every player is different and I understand that as a leader of men. I learned that from a young age. I was a leader at Coastal Carolina, and I’m a leader in the community as well.

I’m going to come in and compete for that starting spot right away.