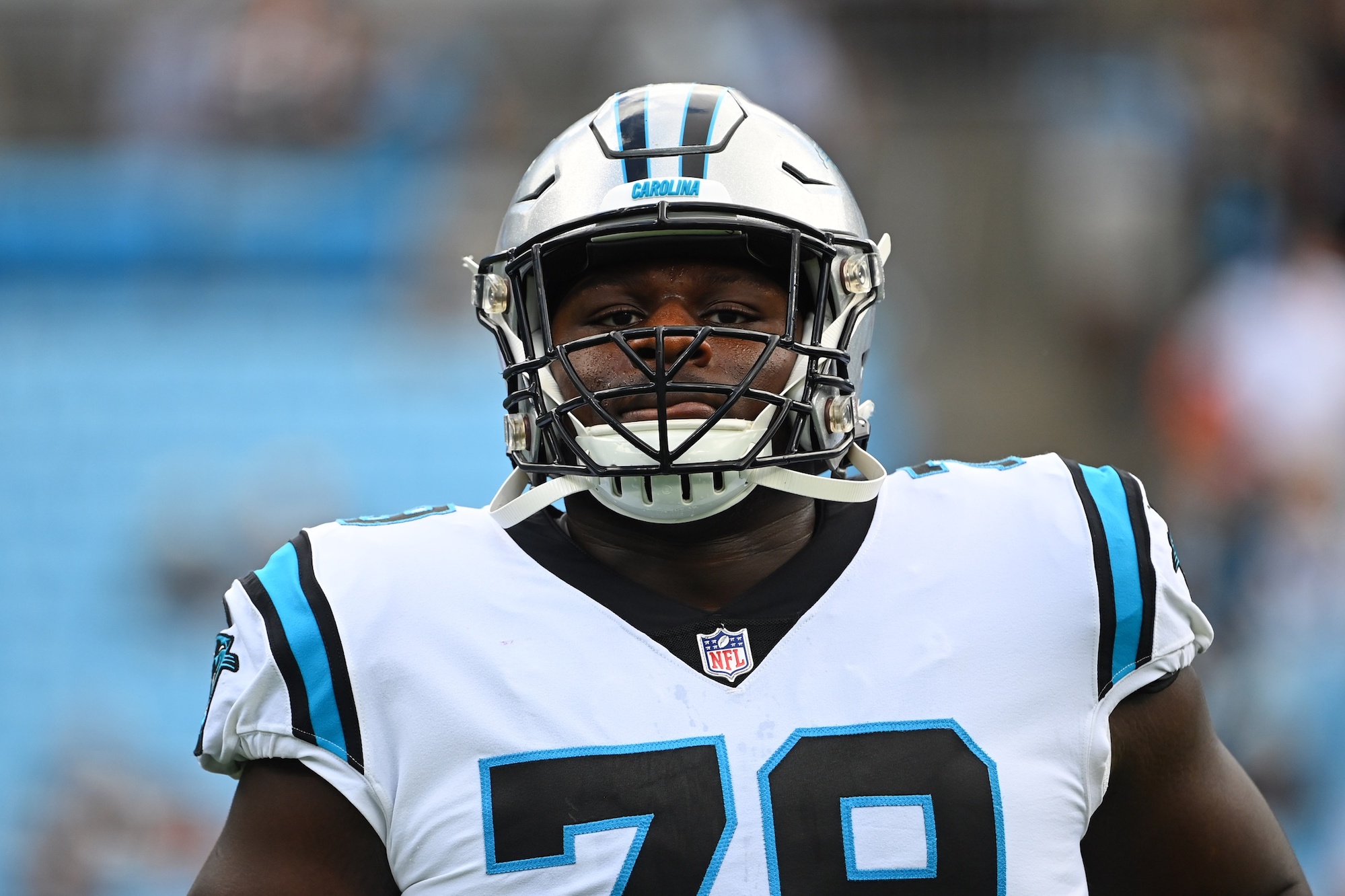 The 2022 season hasn’t gotten off to a great start for the Carolina Panthers, who dismissed head coach Matt Rhule after five games and currently hold a 2-6 record through eight games. After trading away Christian McCaffrey and Robbie Anderson before the deadline, the remainder of this season presents an evaluation opportunity for the young players on the roster and determining who the building blocks are moving forward. The slow start for the team coincided with some early struggles from rookie left tackle Ikem Ekwonu, who the Panthers selected at No. 6 overall to fortify the offensive line. After featuring a different primary starting left tackle in every season since Jordan Gross retired in 2013, Carolina was searching for stability at the position for a number of years.

The initial three-game stretch for Ekwonu and the Panthers came against the Cleveland Browns, New York Giants, and New Orleans Saints, and Ekwonu was clearly still finding his way as a pass blocker. He also had some struggles in the preseason and from the training camp practices I was able to observe. But the switch has flipped and over the last five games, Ekwonu has come into his own as a pass blocker.

Early on, Ekwonu wasn’t showing enough patience and his aggressive nature got the best of him. He wasn’t framing blocks with consistency and getting his hands fit to maintain the width of the pocket. Known for being a tenacious mauler at North Carolina State, winning in pass protection in the NFL requires consistent technique, balance, and timing and Ekwonu has now discovered that.

What I’ve seen over the last five weeks from Ekwonu is more consistent footwork in his kickslide to put him in position to stay square while not opening his hips too soon. I’ve observed far better consistency with strike timing and placement to stymie rushers and keep them out of his pads and unable to execute their rush plan.

While every player develops on different timelines, I can’t help but think about how Rhule’s plan for acclimating Ekwonu contributed to his early struggles. Up until mid-August, the Panthers had Brady Christensen running with the first-team offense at left tackle with Ekwonu behind him. This was a peculiar decision, just months after Rhule stated Christensen wasn’t best suited to play offensive tackle and projected better to the interior offensive line.

“Brady’s more of a guard body,” Rhule said. “He’s played tackle at times, but his future is probably more as a guard-center type.”

During training camp, Rhule explained his decision to put Christensen at tackle ahead of Ekwonu.

“To me, Ickey’s a rookie. He’s gotta earn everything he gets, and he’s got a long way to go,” Rhule said during training camp, via The Athletic. “He does some things really well naturally. He’s unbelievably powerful and talented. But there’s a lot to this game. There’s a lot of nuances and techniques and all those things. He has a long way to go. He’ll get there, but every day he’s gotta work.”

So in an attempt to make the hard-working Ekwonu “earn everything,” Rhule took away meaningful reps during the leadup to the season in favor of Christensen, who he said isn’t ideally suited to play the position? How does this make sense?

It was always inevitable that Ekwonu would be the left tackle and Christensen the left guard, so what was the point in that not being the case from the outset? How much of Ekwonu’s early struggles could have been avoided if he got the reps necessary to get ready for the season? After all, Rhule stated there are a lot of “nuances and techniques.” Wouldn’t time on task and experience help him gain that understanding? The answer is yes, because after a challenging start, Ekwonu has stabilized his play and become a quality pass blocker for the Panthers offense.

The mismanagement of Ekwonu’s early development can simply be added to the long list of Rhule’s failures in Carolina, but Rhule’s no longer employed by the Panthers and Ekwonu is coming into his own. With nine games left in the regular season for Carolina, Ekwonu should continue his progression as he gains more reps and meet the promise of being a high first-round draft selection. The search for a left tackle in Carolina is officially over.