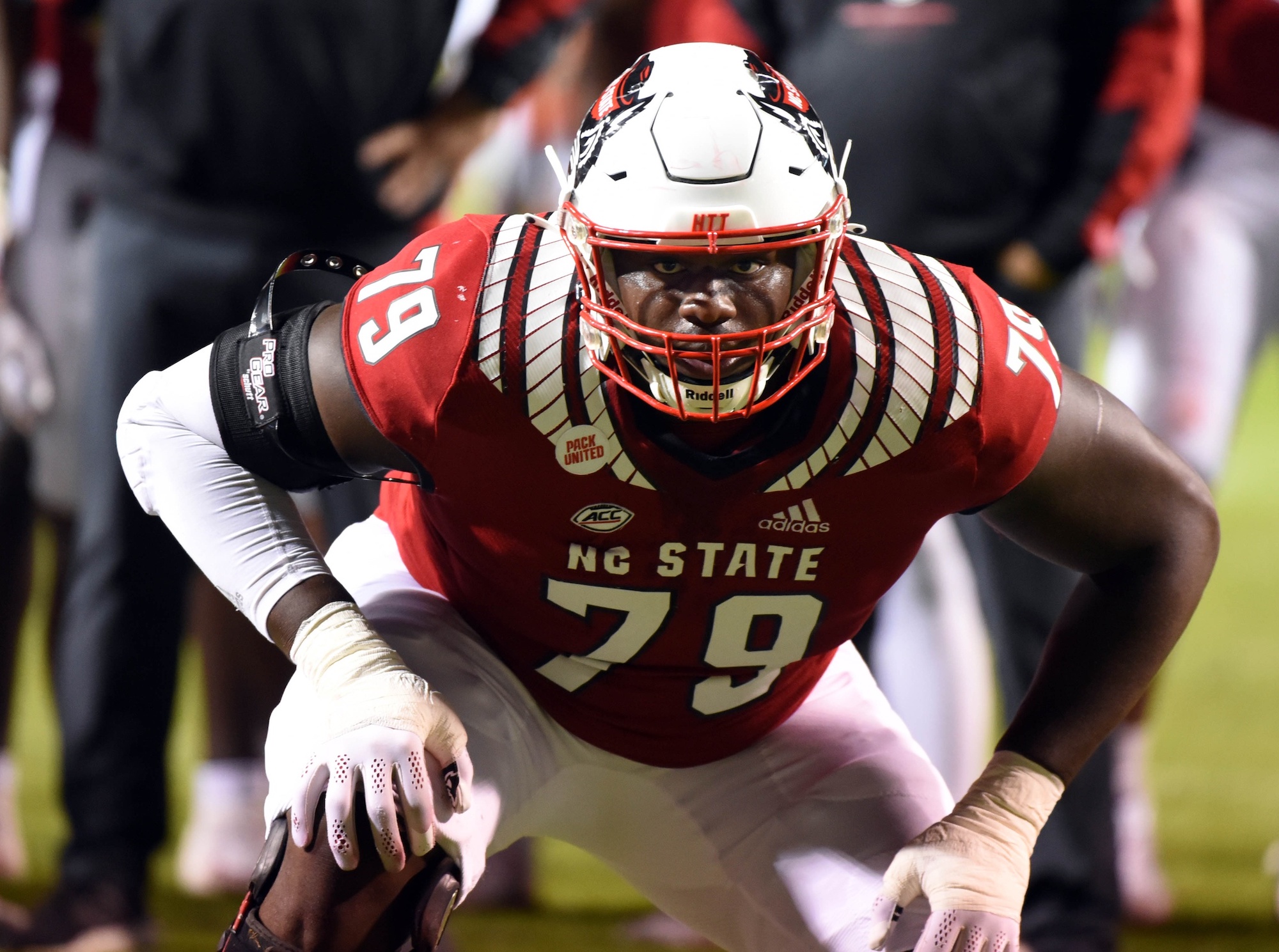 NFL mock draft season has swiftly and mercilessly arrived for 24 franchises who have already been eliminated from Super Bowl contention. The 2022 NFL Draft is just 98 days away from announcing its arrival, and the hype machine is beginning to heat up in a rather furious fashion. One prospect that has been receiving an abundance of love and appreciation as of late is NC State offensive tackle Ikem Ekwonu. The 6-foot-4, 320-pound Ekwonu was the first offensive tackle selected in Kyle Crabbs' latest mock. Ekwonu also shockingly went No. 1 overall in Dane Brugler's recent mock draft for The Athletic. Readers may have been surprised to witness Ekwonu fly off the board before Alabama's Evan Neal in Kyle’s mock, but a deep dive into the tape reveals an excellent prospect worthy of a premium draft selection. Ekwonu is the next high-end talent out of the flourishing and ascending program that is NC State. A devastating blocker that consistently overwhelms opponents with violence and rare explosion at the point of attack, Ekwonu is the type of physical and tough-natured tone-setter that could catapult an offensive line to new heights. Other high-end traits include the raw power, nimble athletic ability, and arm length that may remind some of Louisville's Mekhi Becton, who similarly took the pre-draft process by storm due to his rare size, unexplainable ability to reach the second level, and penchant for dishing out pancakes like a truck stop diner. I vividly recall the first Ekwonu game from NC State's 2021 schedule I studied in-depth. It was an early September contest against Mississippi State in which the Wolfpack was defeated 24-10. There was nothing anonymous or unspectacular about Ekwonu's performance, however, as I routinely spotted No. 79 manhandling any and all defensive linemen across four quarters that qualified as “teach tape.” Further study of Ekwonu's tape confirmed my initial findings—this is a high-level offensive tackle prospect with the ability to develop into an All-Pro starting left tackle on an annual basis. The Jacksonville Jaguars own the No. 1 overall selection in the 2022 draft and general manager Trent Baalke has some difficult decisions to make. There's an excellent and likely chance that either Ekwonu, Neal, Oregon's Kayvon Thibodeaux, or Michigan's Aidan Hutchinson will be the first player selected by the Jaguars, barring a trade. You can make a strong argument for any of the four prospects. K'Lavon Chaisson has thus far failed to develop into the sack artist the Jaguars were hoping to get when they selected him in the first round of the 2020 NFL Draft and has recorded just two sacks through two professional seasons. Josh Allen is undeniably Jacksonville's best pass rusher, and pairing him with either Thibodeaux or Hutchinson would greatly improve a pass rush that crawled to just 32 sacks in 2021. Starting left tackle Cam Robinson is set to hit free agency after playing on the franchise tag this season and is largely expected to explore options elsewhere. Properly protecting Trevor Lawrence’s blindside in 2022 and beyond must take priority. The Jaguars could realistically use any of these high-end talents, and that sentiment rings especially true about Ekwonu, A.K.A. the best offensive tackle in the draft.