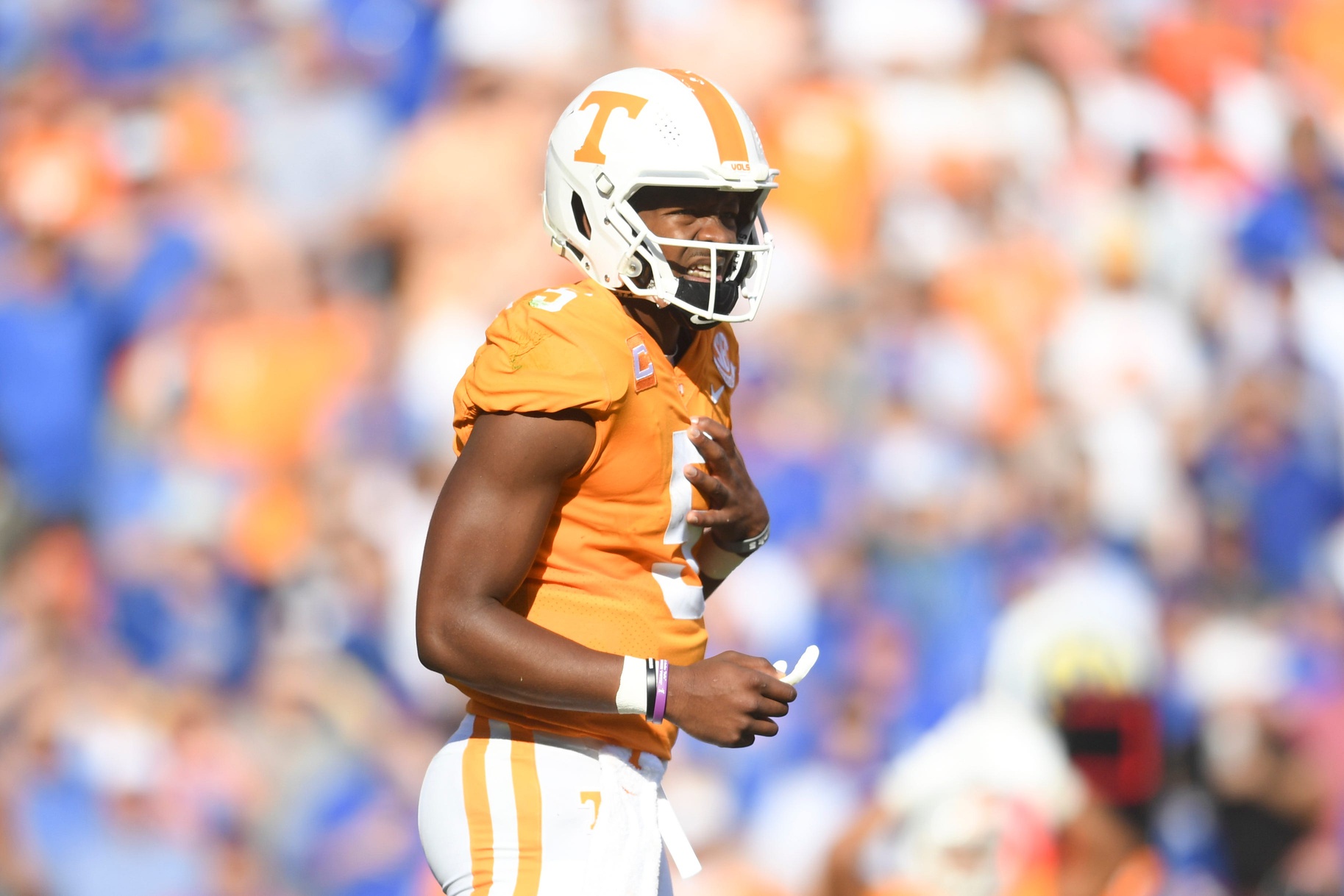 A battle of SEC titans, Saturday’s showdown between the No. 3-ranked Alabama Crimson Tide and No. 6-ranked Tennessee Volunteers has the makings of an NCAA classic written all over it. While it’s an annual proceeding to find Nick Saban’s group atop the totem pole, Josh Heupel and the Volunteers are the new kids on the block who look primed to spoil the party. Led by Heisman trophy candidate Hendon Hooker, let’s take a minute to introduce the dynamic dual-threat talent.

Early last fall, it was a battle of three arms in Knoxville. As it usually does, the heat of summer months often strains out the undeserving. One prevailed in the form of Hooker, a Virginia Tech transfer in search of pumping fresh air into the lungs of his football career. A redshirt senior now this season, Hooker has become one of the most polarizing talents in the college game.

“For Hendon—and I’ve said this to him—this year is not about stats, touchdowns, interceptions, yards. It’s about wins,” said head coach Josh Heupel. “Managing all those expectations and just focusing on doing your job at the highest level is the most important thing for him.”

While his 31 touchdowns compared to three picks last year initially raised the performance ceiling heading into this year, a deeper dive into his evolving game has the industry on notice despite concerns surrounding his age come next April (25). An offense that moves at a tempo unmatched by many in the college game, Tennessee operates at a clip of nearly three plays per minute. In layman’s terms, they work a defense to death.

This is about as good as it gets at the college level. And who better to highlight his game against than Alabama, who dismantled his Volunteers 52-24 in Tuscaloosa last October? A simple nine-route to the boundary in a 2×2 set, Hooker drops it out of the sky some 42 yards downfield. Although defensive back DeMarcco Hellams did well to make up the gap created by Cedric Tillman at the onset of the route, Hooker placed the ball in a spot only his wideout could make a play.

While you could look at it from a 10,000-foot view and say it’s a simple throw from the pocket where there’s controlled chaos around him, if you’ve ever aligned under center, an appreciation for touch throws like this is well deserved. The play, although it fell into the shadows of the Volunteers’ loss, was a culmination of Hooker’s development from the shoulders up.

His time in Blacksburg often showcased a quarterback attempting to play hero ball. Forcing throws, failing to read coverages, the way in which the veteran quarterback went about his business wasn’t good practice—pun wholeheartedly intended. But now, and for a Tennessee program set to take on the big brother that is the Crimson Tide, his game will take on an even brighter spotlight.

While Hooker surely remembers his three-touchdown performance against Saban’s defense last season, going the extra mile and leading his team to victory on Saturday will require he and Heupel to put their heads together—continuing to evolve the nation’s top offense in yards per game (547.8). It’ll be tough sledding for wideouts Tillman, Jalin Hyatt, and Bru McCoy against an Alabama secondary littered with NFL talent, but the play of ball carriers Jaylen Wright and Jabari Small could hold the key to the high-octane Tennessee attack. Success on the ground opens up play-action, and when bodies begin to creep into the box, it’s been easy pickings for Hooker.

Similar to the success the Texas Longhorns had against the Crimson Tide a few weeks back, taking calculated shots while force-feeding the run could be a formula for a win. And without the chaos of Bryant-Denny Stadium to counter, don’t be surprised if the Volunteers not only keep it close come the second half but prove victorious with all the momentum in the world on their side.