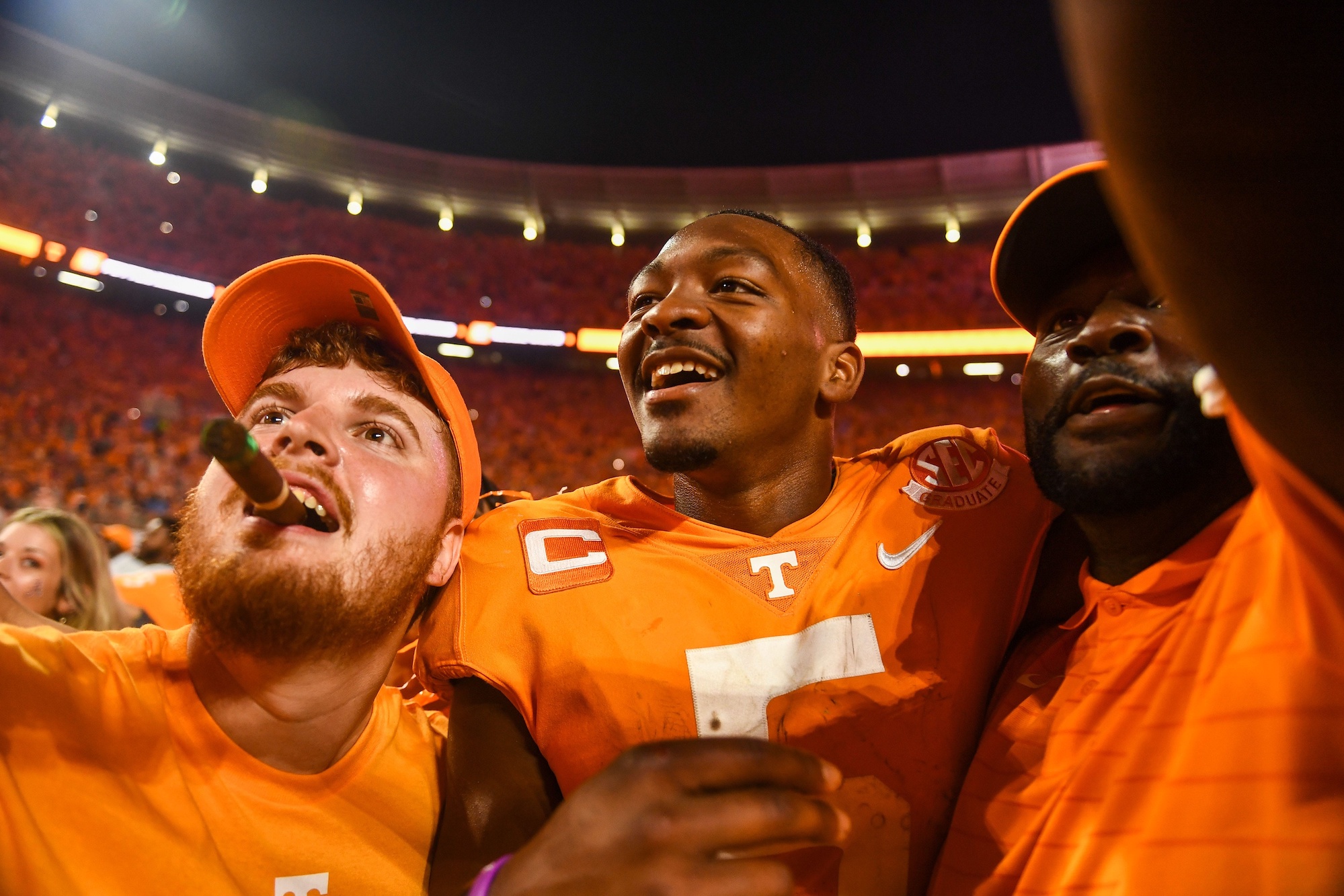 Is Hendon Hooker In Round 1 Conversation For 2023 NFL Draft?

Tennessee Volunteers quarterback Hendon Hooker helped his program execute the unthinkable on Saturday. Hooker led his program to an emotional 52-49 victory over Alabama. The victory improved Tennessee’s record to a perfect 6-0 and represented their first triumph over Alabama in 15 years. Hooker’s current production is placing him in the first-round conversation for the 2023 NFL Draft.

The No. 84 overall player in our latest TDN100 update, Hooker completed 21-of-30 passing attempts for 385 passing yards, five touchdowns, and one interception. Hooker drove the Vols 45 yards in 13 seconds to set up the game-winning field goal. It was a legacy-defining showing. Hooker’s big-game performance against Alabama will be at the forefront of his pre-draft discussions.

Hooker didn’t fear a Crimson Tide defense that’s littered with 5-star prospects and future NFL defenders. Hooker consistently drove the football outside the numbers and pushed the ball down the field with an aggressive mentality. Hooker tested tight throwing windows and trusted his receivers to win individual battles. Hooker is playing with all of the confidence in the world in his abilities. NFL decision-makers will note his positive approach.

Through six contests, Hooker has completed 119-of-170 passing attempts (70.0%) for 1,817 yards, 15 touchdowns, and one interception. A dual-threat option, Hooker has added 287 rushing yards and three touchdowns to his offensive totals. Hooker has been efficient and accurate. Hooker is now rightfully viewed as the second-likeliest candidate to win this year’s Heisman honor.

Just one quarterback (Kenny Pickett) was selected in the first round of the 2022 NFL Draft. It insinuates several signal-callers will be picked in the top 32 in 2023 as various struggling franchises attempt to identify their future quarterback. That could propel Hooker into the conversation.

C.J. Stroud and Bryce Young are the clear top-two favorites to become the first quarterbacks selected in 2023. The order becomes significantly muddier after that. Kentucky’s Will Levis is largely viewed as a first-round quarterback, too. Could Hooker be considered the fourth-best quarterback in April’s draft? It’s certainly within the realm of possibility.

It’s worth acknowledging Hooker has some flaws working against him as a potential first-round prospect. Hooker is an older player (fifth-year senior) after transferring to Tennessee (grad transfer) from Virginia Tech ahead of the 2021 campaign. Volunteers head coach Josh Heupel operates a vertical spread offense that doesn’t necessarily translate to the next level. Hooker thrives on spacing concepts and predetermined throws that rarely ask him to go through his progressions. Hooker will face questions regarding the system and his ability to translate to the NFL throughout the pre-draft process.

We simply can’t ignore the possibility of Hooker entering the first-round conversation. Hooker is currently lighting the nation on fire. He’s capturing lightning in a bottle and we’ve seen quarterbacks elevate themselves into the top 32 by following a similar path to the one Hooker is currently embarking on. His current pace of production can’t be disregarded.

Hooker is currently achieving something special. Saturday’s victory elevated Tennessee to the No. 3 ranked program in the nation via AP’s latest top 25 release. The Volunteers are playing themselves into consideration for the college football playoff. Don’t be shocked if Hendon Hooker rides this success into the first round of the 2023 NFL Draft.