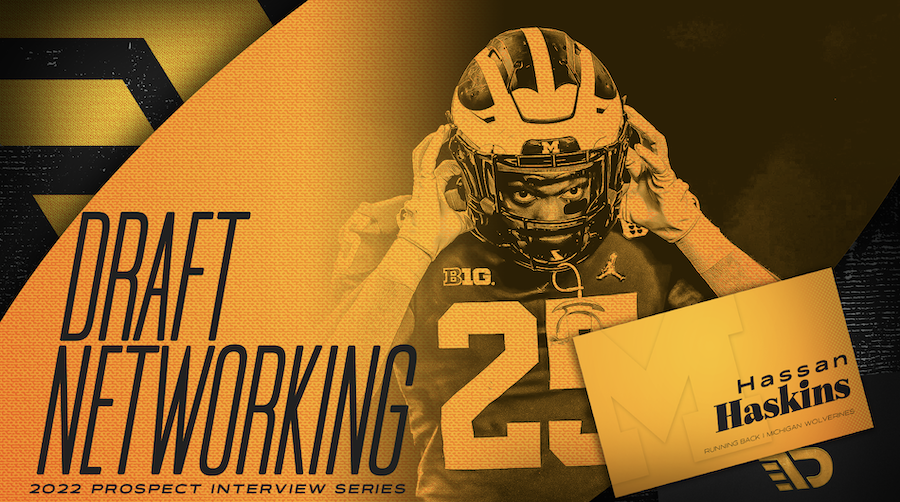 NFL teams are constantly searching for three-down running backs. A punishing, productive ball-carrier that can also play in pass protection and catch passes as a legitimate check-down option adds a ton of value to a professional team. Michigan’s Hassan Haskins is that type of player. His bruising running style carries bellcow potential.

Haskins recently spoke exclusively with The Draft Network about his combine experience and performance, his career at Michigan, which teams have shown interest in him throughout the process, the best game he ever played in a Michigan jersey, and so much more.

JM: The 2020 season was cut short due to the pandemic. You returned for a full schedule in 2021 and exploded for 1,327 yards and a staggering 20 touchdowns. What was your mindset like heading into the season?

HH: The 2020 season wasn’t our best season. We had to change some things as a team. I entered every game in 2021 with a different mindset. I wanted to dominate every time I stepped onto the field. We had to do our thing and keep dominating the opposition. That’s really what I wanted to do on a weekly basis.

JM: The performance against Ohio State was the cherry on top. You racked up 169 rushing yards and a Michigan record five touchdowns in the historic triumph over Ohio State. What was it like being in the zone for that game?

HH: I’m not going to lie to you. That game was different. I was in the zone for that entire week leading up to the game, to be honest with you. You said it, we hadn’t beaten that team in a long time, years even. I knew that had to be a different week of preparation for us and I wanted to be our difference-maker. I was in the zone that entire week. I unleashed it all when it came time to take the field. That game was crazy for real.

JM: It was an epic victory for the Michigan program. What’s playing for coach Jim Harbaugh like?

HH: He’s amazing. He’s super intelligent. He’s a deep thinker. Playing for him was a blessing. He took a risk by blessing me with an opportunity to play for his football team. I can never thank him enough for that. His presence was a blessing for me. I learned from the best. He taught us so much. He’s an amazing coach.

JM: You recently went to the combine and put up 27 reps on the bench press, which was the most among all participating running backs. It wasn’t surprising given what we saw from you on tape. What was your biggest takeaway from the combine?

HH: It was a fun experience. It was a once-in-a-lifetime opportunity for me. I tried to go out there and have fun with it. It was great to be around all of the top players in the country and things of that nature. I was blessed enough to be there. I was excited to prove that I have terrific strength in regards to the 27 bench press reps you mentioned. I couldn’t do much else because of the ankle injury. I was glad to be able to do something and I poured all of my energy into the bench press. I can’t complain at the end of the day. It was still an amazing experience.

JM: We were thrilled to see you participate in some capacity. Which teams did you meet with formally throughout the week, and do you have any virtual visits, or top-30 in-person visits coming up?

HH: I met with the Broncos, Ravens, and Giants at the combine. I’ve had so many virtual meetings. It’s tough to recall all of them. My schedule has been crazy (laughs). The month of March was crazy for me. I’ve been meeting with a bunch of teams virtually. They’ve been calling my phone. I can’t recall every team I’ve met with, but I know I met with the Texans, Cowboys, Jaguars, and Saints to name a few. Those are the ones that come to mind.

JM: There’s a lot of interest in you and it’s easy to see why. When I turn the tape on, I see a powerful running back that loves wearing down a defense. How did you develop that mentality?

HH: I’ve had that mentality since I was a kid. I grew up in Saint Louis, Missouri. I’m from the southside area of the city. It was a rough neighborhood. I had to develop an extremely strong mindset from a young age. I had to quickly mature beyond my years. Playing football with a terrific amount of toughness has always been on my mind. I had to survive first and foremost. I had to be one that chose survival. I’ve always had that mindset and determination.

JM: Your toughness jumps off the screen. Do you feel like defenses get tired of tackling you in the third and fourth quarters?

JM: It’s extremely obvious. Being able to impact the passing game is crucial for today’s running backs, both as a pass catcher and in protection. Tell me about your abilities in that area of the game.

HH: I think I’m one of the best running backs in pass protection in this entire draft class. I feel like I do a great job in that area of the game. I’m always working on my techniques and I can definitely improve in some areas but I feel great about my ability in pass pro. I’m going to continue working on those things at the next level.

When it comes to route-running and things of that nature in the passing game, Michigan didn’t ask me to do much of it in 2021. I can definitely catch the ball. I know how to run routes. I showed that at my Pro Day. I received terrific feedback from teams about what I did as a pass-catcher at my Pro Day. I don’t think I ever had a single drop at Michigan. I definitely have the ability. They just didn’t use me much in that area because we shared those duties within our running back room. I’m going to show my abilities as a pass-catcher at the next level.

JM: I’ve really appreciated your time today. This conversation has highlighted why you’re one of the most complete running backs in the 2022 NFL Draft. In closing, what kind of impact is Hassan Haskins going to make at the next level?

HH: Get ready. You’re going to see a huge impact from Hassan Haskins at the next level. I’m trying to break records. Everybody that’s ever doubted me, I’m trying to prove them wrong. I believe I can be the best running back in this draft class. Stay tuned. You’ll be hearing a lot about Hassan Haskins.