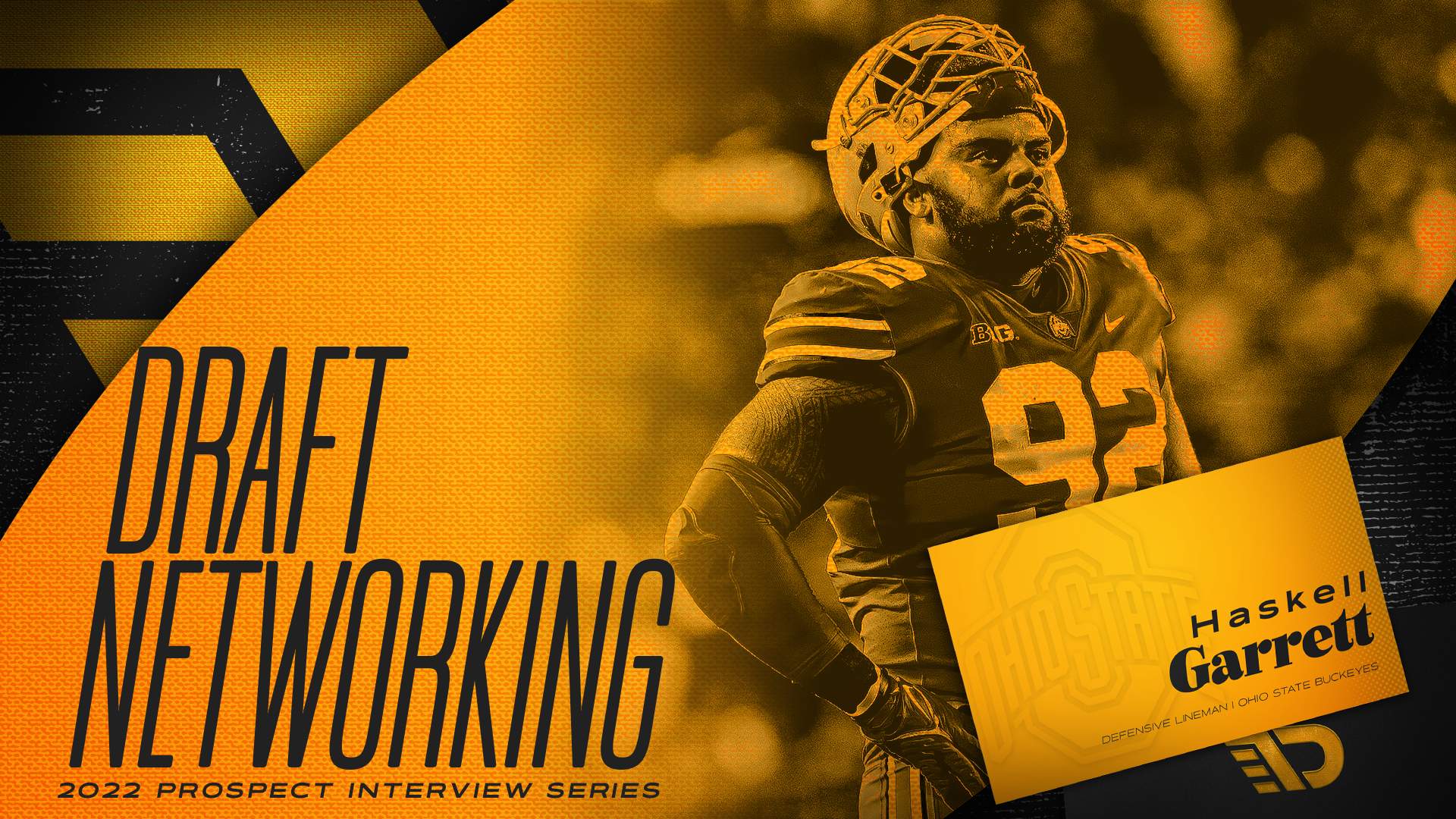 Having played for the Buckeyes, Garrett has received top-notch coaching at one of the finest programs in the nation. As he prepares to enter the next level, Garrett’s powerful hands generate the raw power necessary to knock back offensive linemen at the next level.

Garrett recently spoke exclusively with The Draft Network regarding his experiences and career at Ohio State, his pass-rush arsenal, why he loves stopping the run, how playing in the Buckeyes’ defense helped prepare him for the next level, and so much more.

JM: You returned for a fifth season in 2021 and you recorded career highs in sacks (5.5) and tackles for loss (7.0). What allowed you to take steps forward in your final campaign?

HG: I would credit my preparation first and foremost. Of course, we had more games in 2021 than we did in 2020, and that didn’t hurt. It gave me an opportunity to showcase who I am as a football player both on and off the field. My preparation really improved and it translated into more on-field success.

JM: All of those things definitely worked in your favor. On tape, we see a defensive lineman that loves to attack vertically. How did you develop that mindset?

HG: I’d have to mention the predecessors that came before me. Watching guys like Dre’Mont Jones, DaVon Hamilton, Robert Landers, and Jashon Cornell throughout the years helped me a ton. Our coaching staff really preached that first-step vertical penetration. The teammates I sat behind, they brought that with them to the field every weekend. I learned from their experiences. I paid close attention to their success. They paved the road for me. They set a great example regarding how it’s done.

JM: You’ve had so many great teammates throughout the years. Do you feel your game is more developed as a pass rusher or against the run?

HG: I feel like I’m more developed as a run stopper at this point in time. I’m continuing to work on my skills as a pass rusher. I’ve spent a lot of preparation time throughout the pre-draft process working on perfecting my craft as a pass rusher. I’m always trying to get better as a pass rusher. If you watched me in 2020 and then turned on my 2021 tape, I definitely got better, but there’s always room for improvement.

JM: As a follow-up, what are your go-to moves as a pass rusher? You were improved in 2021.

HG: I set it all up with power. My power makes opposing offensive linemen sit down. When they start thinking I’m about to hit them with another bull rush, I use my hand technique to engage in hand fighting. I can hit him with speed. I might go to a long-arm first. I can counter off of my base move with a long-arm-chop or a long-arm-club. I can counter inside with side scissors. A lot of that is rooted off my long arm.

JM: How do you think playing in Ohio State’s defensive scheme helped prepare you for the next level?

HG: Ohio State did a tremendous job preparing me for the NFL. In terms of stopping the run, our 4-3 defense was set up to do that. Playing for our defensive line got me ready to stop the run in the NFL. It prepared me. When it came to third down, I had to get after the quarterback. I played in a hybrid 3-4 and 5-2 looks on third-and-obvious. My experiences as a Buckeye compliments how defenses are run at the next level nowadays.  I understand the different types of defenses I could play under. It’s going to help me make a smoother transition.

JM: You played in such versatile fronts. Have you met any teams virtually or made any in-person top 30 visits, and do you have any more of those coming up?

HG: I’ve spoken with a good amount of teams. I do have some Top 30 visits coming up, but the details must remain private at this time. I’ll be taking some trips. I’ve spoken to pretty much every team in some capacity. Throughout the entire process, I’ve spoken with teams such as the Dallas Cowboys, Seattle Seahawks, Las Vegas Raiders, Cincinnati Bengals, and Minnesota Vikings, to name a few.

JM: There’s a lot of interest in you and it’s easy to see why. If you were going to war tomorrow and could only bring one teammate with you from Ohio State, who would you bring and why?

HG: Wow, you’re really going to make me answer that question? (laughs). That’s so tough. Can I at least pick one player from both sides of the ball? From any year?

HG: I would bring Justin Fields with me. He was our quarterback, our leader. He got the job done. The toughness that he showed throughout that Clemson game back in 2020 stuck with me. I would go to war with Justin Fields any day of the week. He’s definitely somebody I’d bring from the offensive side of the ball. He raises the level of competition around him. He changed the expectations for our offense.

From the defensive side of the ball, I mean, wow, that’s even tougher. If I was choosing somebody from any year, I’d probably go with Nick Bosa. That’s really hard though. Playing and practicing alongside him was special. Nick is like 6-foot-3 (laughs). A lot of offensive tackles struggled with him. He’s a big, massive dude. He’s so quick and strong. He stops the run. His hands are so elite and violent. He can play on all four downs. I’d definitely go to war with him.

JM: Those are two terrific choices. We’re excited to watch you play in the NFL, Haskell. I’ve really appreciated your time today. What kind of impact is Haskell Garrett going to make at the next level?

HG: I’m going to bring terrific depth to the next level. You can rely on me throughout the course of a season. I’m going to stay healthy. I’m going to manage my time efficiently so that I can be the best player I can be. I’m going to be prepared and ready. I want to help the organization win a Super Bowl. That’s the type of impact I’m going to make.